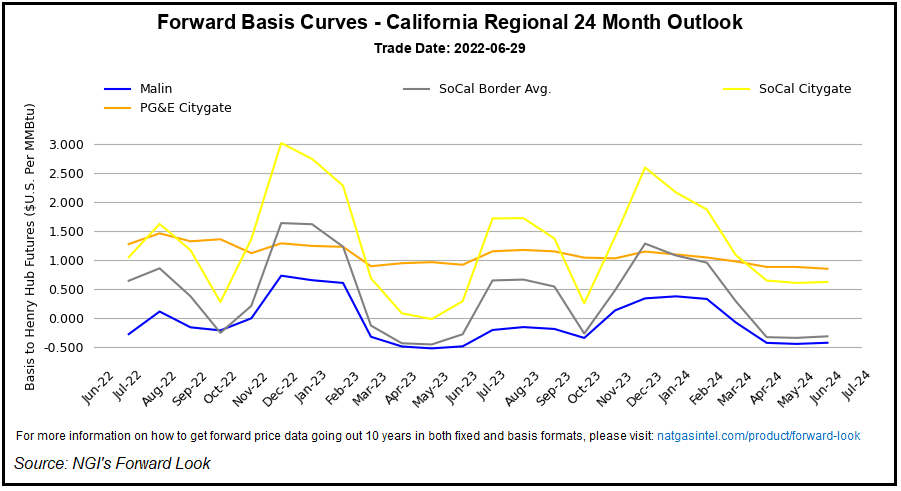 Fixed prices for August delivery at benchmark Henry Hub tumbled 37.4 cents during the period to average $6.499/MMBtu, NGI’s Forward Look data show. Fixed price declines of around 20-40 cents week/week were the norm for most Lower 48 hubs.

EIA unveiled an 82 Bcf injection into Lower 48 gas stocks for the week ended June 24. The build lifted inventories to 2,251 Bcf, 322 Bcf below the five-year average.

It also marked a second straight larger-than-expected injection following an explosion that knocked the 2.0 Bcf/d Freeport LNG terminal on Quintana Island, TX, offline until later this year – or longer.

That the 82 Bcf print overshot market expectations seemed to confirm “that more gas is getting into storage than our data is detecting,” the firm said.

The magnitude of the sell-off suggested that markets deem balances “even looser than expected” following the Freeport LNG outage, according to NatGasWeather. This is “likely due to stronger production than what’s being reported, potentially over 96 Bcf/d.”

Reports that a federal regulator was proposing requirements that could ultimately delay a return to service for the Freeport terminal further fueled bearish sentiment Thursday.

The Pipeline and Hazardous Materials Safety Administration (PHMSA) said the cause of the June 8 incident is still under investigation. However, preliminary evidence suggests an isolated pressure safety valve created an “overpressure situation” in 300 feet of vacuum insulated piping. The agency issued a notice of proposed safety order that lays out what must be done before the terminal may return to service.

“At a high level, the PHMSA is now heavily involved in the investigation and there may be a risk that the Freeport outage extends past the latest 90-day guidance,” said analysts at Criterion Research. The analysts expect a slower ramp-up at the facility that is likely to further impact U.S. storage inventories.

As prices headed lower overall, there was some notable basis strengthening at numerous hubs during the June 23-29 trading period, including along the West Coast. PG&E Citygate August basis climbed 20.5 cents week/week to plus-$1.456.

The biggest basis gains for the period occurred in the Southeast, where Florida Gas Zone 3 finished at plus-$1.014 for August, a 68.0-cent swing higher. Transco Zone 4 August basis jumped 37.7 cents higher to trade at an 81.6-cent premium to the national benchmark.

The basis shifts coincide with expectations for robust cooling demand on widespread heat for the Lower 48 into the first half of July.

NatGasWeather said temperatures will be “very warm to hot” for “most of the southern two-thirds of the U.S. into the foreseeable future for strong national demand.” Still, the amount of hot weather needed to swing the market higher has increased, the firm noted.

“Before Freeport issues, nothing could slow bullish momentum,” NatGasWeather said. “Now a hot and bullish weather pattern isn’t good enough. Where will prices head next after bulls were again forced to rush for the exits the past several hours?”

Storage levels in Western Canada are lagging for this time of year, and that could pose issues for the upcoming heating season both regionally and beyond, RBN Energy LLC analyst Martin King wrote in a recent blog post.

RBN’s data showed Western Canada storage at a 16-year low as of the end of March. The storage situation could have knock-on effects given the region is “vitally important” for balancing the North American market during winter, King noted.

“Gas storage levels in Western Canada have remained well below the bottom of the five-year historic range so far this year…and we think it will struggle to even reach the bottom of this range by the end of the injection season,” King said.

Lean stockpiles heading into the next heating season “could set the stage for extreme volatility for benchmark AECO prices and reduce the region’s storage flexibility to deal with the inevitable cold snaps when the market needs gas the most,” the analyst added.