A Houston-based company on Wednesday asked the U.S. Department of Energy (DOE) for permission to export nearly 50 Bcf of liquefied natural gas (LNG) to Caribbean markets from a proposed Jacksonville, FL, export facility. 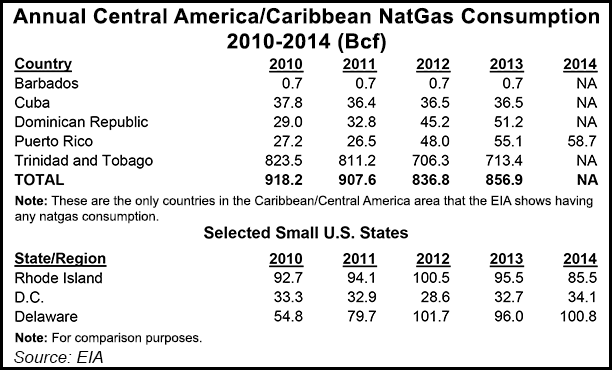 Eagle LNG Partners is seeking DOE approval to export up to 49.8 Bcf or nearly 1 million tons annually of LNG to both free trade agreement (FTA) and non-FTA nations.

Eagle LNG wants the authorization for what it hopes will be a Federal Energy Regulatory Commission (FERC)-authorized export terminal in Jacksonville, seeking to export LNG on its own behalf and on the behalf of other organizations.

Under American LNG’s plans, ISO containers designated for delivery to export customers would be loaded onto container ships or roll-on/roll-off oceangoing carriers at the nearby Port of Miami or other Florida ports capable of handling such cargo, DOE said. Likely destinations for the cargoes, according to American LNG, are nations in the Caribbean and Central America.

Similarly, Eagle LNG CEO Sean Lalani said U.S. LNG supplies can “decrease electricity costs and result in lower economic and environmental costs for the Caribbean region, which is part of our intended market.” The region is looking for more reliability and affordability for electricity, and natural gas is thought to be a way to do that, Lalani said.

Eagle intends to deploy modular, small-scale natural gas liquefaction technology in markets where larger scale liquefaction projects are not feasible. The company is also in the process of submitting its application to FERC for an OK on the Jacksonville site. “This is considerably smaller than other LNG export projects being considered,” a company spokesperson said.

Eagle LNG is a unit of Canadian-based Ferus; American LNG is controlled by Fortress Equity Partners (A) LP, which is sponsored by entities related to Fortress Investment Group LLC.