A second person has been found dead in the Gulf of Mexico after a Seacor Marine-owned liftboat capsized on Tuesday. 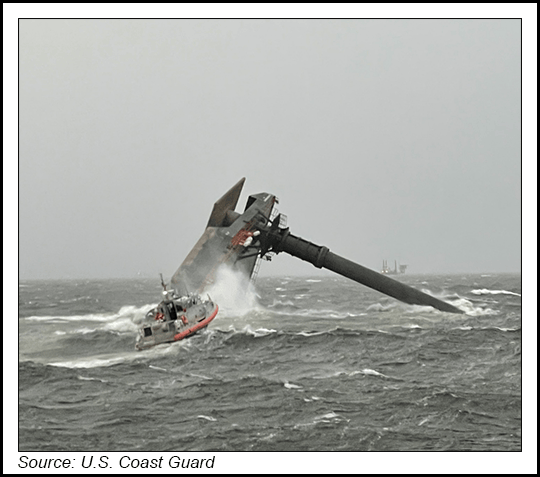 The U.S. Coast Guard (USCG) said Friday the person, an unidentified man, was spotted around 7:10 p.m. local time on Thursday by a helicopter crew that was searching the area. He was found in the water near the capsized Seacor Power liftboat and recovered by the crew of the Coast Guard Cutter Benjamin Daily. He was transported to Coast Guard Station Grand Isle where a coroner pronounced him dead.

The search continued Friday for 11 people who were still missing after the liftboat capsized in rough weather. Of the crew of 19, six were rescued by the USCG and “good Samaritan vessels” and one other was confirmed dead earlier in the week.

Divers were at the scene at 7:50 a.m. Friday to conduct an assessment and begin dive operations. However, dangerous weather temporarily interrupted their efforts, forcing them to resurface mid-morning and resume dives at about 1:30 p.m.

A USCG spokesperson told NGI that search and rescue crews have to contend with a number of factors, including currents, wave height, and sea and air temperature.

“It’s a very dynamic aspect to it,” the spokesperson said. “But there’s a factor that we’re never able to factor in, and that’s a person’s will to live.”

The incident has been declared a major marine casualty, and the USCG said it would lead a preliminary investigation, with the National Transportation Safety Board joining.