Seeking to boost crude oil deliveries to the Gulf Coast, Seaway Pipeline is gauging interest for a proposed 200,000 b/d expansion of its 500-mile, 30-inch diameter system stretching from Cushing, OK, to the Freeport, TX, area. 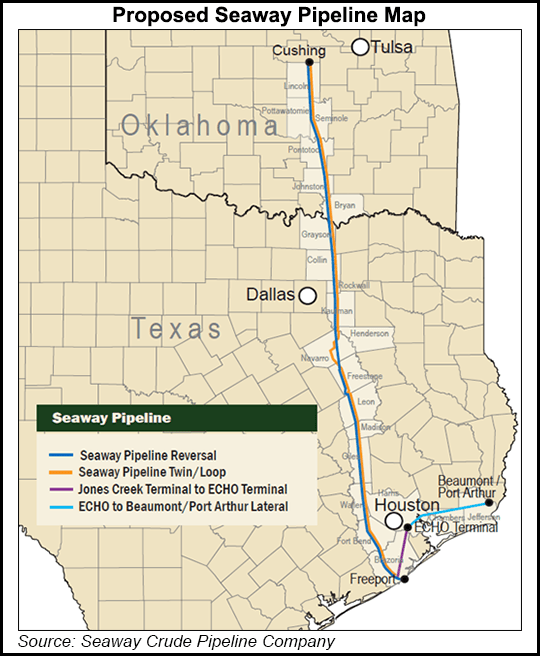 The expansion aims to debottleneck and optimize the system, principally through pump upgrades that could provide an incremental 200,000 b/d or more of light crude capacity and include further “quality enhancements in the segregation of heavy and light crude shipments.”

Seaway, a joint venture between Enterprise Products Partners LP and Enbridge Inc., indicated that a further expansion is possible depending on customer demand. Up to 100,000 b/d of initial light crude expansion capacity could be available beginning in the second half of 2020, with the expansion expected to be fully in service in 2022.

Seaway’s fee schedule is starting at 99 cents/bbl for light crude oil pipeline transportation from Cushing, OK, although fees will vary depending on volume, destination and term. The system also includes a terminal and distribution network that starts in Texas City, TX, and serves refineries locally and throughout the Houston area, as well as dock facilities in Freeport and Texas City.

Although crude production growth in the shale basins has been slowing this year, overall output continues to increase, according to RBN Energy LLC. Gulf Coast crude exports have expanded almost eightfold in the past three-plus years, from slightly under 300,000 b/d on average in 2016 to an average 2.6 million b/d in the first 10 months of 2019.

New crude pipeline capacity to the Gulf Coast has also come online, including Plains All American Pipeline LP’s Cactus II last summer, with other projects on the way.

Earlier this month, Enable Midstream Partners LP moved forward with a 100,000 Dth/d expansion of its system aimed at debottlenecking the Anadarko and Arkoma basins. In the Permian Basin, the Epic Crude Oil Pipeline and Enbridge’s Gray Oak system are due to start operations in the coming months.

Announced plans for pipelines to accommodate increased production from the Permian Basin, the Rockies and North Dakota, if all built, would deliver an additional 1.7 million b/d of crude to the Beaumont-Port Arthur, TX, (BPA) and Houston areas by the end of 2021, according to RBN. Also adding to BPA supply is Energy Transfer LP’s proposed 500,000 b/d Ted Collins pipeline linking the Houston Fuel Oil Terminal, which the company will acquire next month as part of its planned purchase of SemGroup, to Nederland, TX.

A “rebalancing” of the global liquefied natural gas (LNG) market is closer than previously thought as supply outages linger and demand continues to grow, according to Morgan Stanley Research. The rebalancing originally pegged for 2022 has “accelerated” into 2021, analysts led by Devin McDermott said. In the United States, demand growth largely driven by LNG…