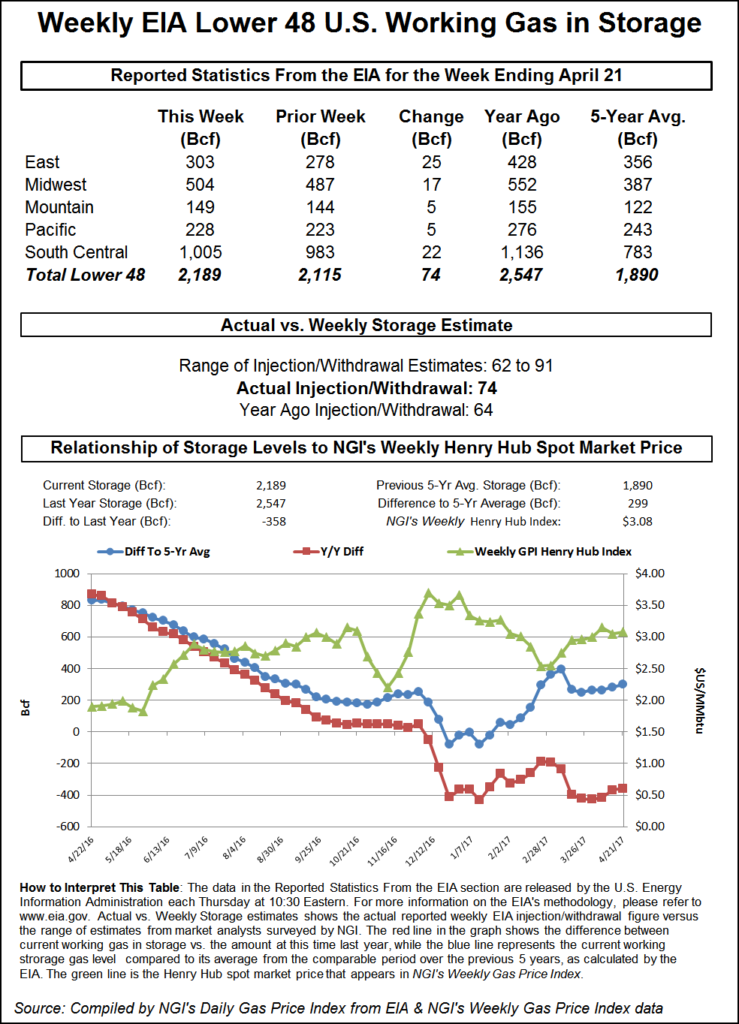 Wednesday’s price action reversed a 3.9-cent gain from the day before, when the prompt-month traded as high as $2.820, testing the upper end of a long-standing trading range, according to analysts.

Estimates for Thursday’s Energy Information Administration (EIA) storage report point to the injection season officially getting underway this week — about a month later than unusual.

A Reuters survey of traders and analysts on average called for EIA to report a 52 Bcf injection into Lower 48 gas stocks for the week ending April 27, with responses ranging from 40 Bcf to 68 Bcf. A Bloomberg survey produced a median build of 51 Bcf, with responses ranging from 40 Bcf to 62 Bcf. Last year EIA recorded a 68 Bcf injection during the period, while the five-year average is a build of 69 Bcf.

“I know I’m a little on the low end, but the low end is the place to be the last few weeks,” Flynn told NGI.

The market may need to see a smaller injection to avoid a move lower given moderate weather and strong production that’s expected to continue rising, according to Flynn.

“I think if we get a number anywhere near the five-year average it will get very bearish for this market, and I think the market’s preparing for the possibility that it’s going to go down,” he said.

NatGasWeather.com said it expects weather patterns to “remain neutral to bearish into the foreseeable future, with much larger injections to come…we now look to the first signs of widespread heat and see the southern U.S. playing out warmer than normal in late May, so if it were to continue into early June, cooling degree days could begin to take a bigger bite out of injections with increasing power burns.”

This week’s report should see the year-on-five-year storage deficit widen to around 550 Bcf, and “there should be some concerns” storage won’t refill at a fast enough clip to satisfy the market, the firm said. The reports for weeks three through seven of the current outlook hold the most significance, “and they better come in quite hefty or the markets could be disappointed.”

Turning to the spot market, Northeast prices were mixed Wednesday as forecasts called for some unusually warm — though not particularly extreme — temperatures for major population centers in the region.

Radiant Solutions was forecasting temperatures around 10-20 degrees above normal Thursday and Friday along the I-95 corridor from Washington, DC to Boston, equating to highs in the 80s to low-90s, with lows in the 60s.

Algonquin Citygate shed 7 cents to $2.62 after adding 21 cents Tuesday, while Transco Zone 6 New York climbed 18 cents to $2.76 after giving up a dime the day before.

In California, SoCal Citygate reversed the prior day’s losses, adding 21 cents to $3.62.

“Shut down checks at the Casa Grande station will lead to an operating capacity reduction of 107 MMcf/d at the CASA C point, which tracks westbound molecules on the intermediate pressure system of the South Mainline and has been flowing full over the last month,” Bernardi said. “Past disruptions here have sometimes corresponded with spikes in SoCal Border basis price.

“However, EPNG has also kept molecules flowing to SoCalGas by transferring gas from one pressure system to another…and by wheeling gas through its interconnect with Mojave and the southeasterly-flowing Line 1903.”

Meanwhile, an administrative law judge for the California Public Utilities Commission (CPUC) on Wednesday issued a proposed decision that would, among other things, reject plans submitted by SoCalGas and San Diego Gas & Electric to build a new 47-mile, 36-inch diameter pipeline in San Diego County.

A force majeure event on NGPL’s system in South Texas could restrict about 85 MMcf/d of flows, according to Genscape analyst Vanessa Witte.

“NGPL declared a force majeure at CS 300 on Segment 22 from May 1-31, which was not initially expected to impact flows. However, due to horsepower issues at CS 300, nominations for southbound flow received north or east of CS 302, just upstream of CS 300, will be scheduled to 40% of primary firm as of May 3 and lasting until further notice,” Witte said.

Genscape’s proprietary monitor of NET Mexico pipeline flows was showing a “modest decline” Wednesday but “not outside the range of normal intra-day fluctuations,” according to Witte.

The charitable arm of NiSource Inc., whose Massachusetts subsidiary was blamed for a series of natural gas pipeline explosions in 2018, is providing $10 million to support nonprofits in the three communities impacted by the tragedy. The NiSource Charitable Foundation, the parent company of Columbia Gas of Massachusetts, said the grants for up to $250,000…