A leaner-than-expected storage injection couldn’t relieve the bearish pressure on the U.S. natural gas futures market Thursday as prices eased lower in the wake of the Energy Information Administration’s latest inventory report. In the spot market, the price response to a widespread heat wave building over the eastern two thirds of the Lower 48 remained muted; the NGI Spot Gas National Avg. gained a penny to $2.175/MMBtu. 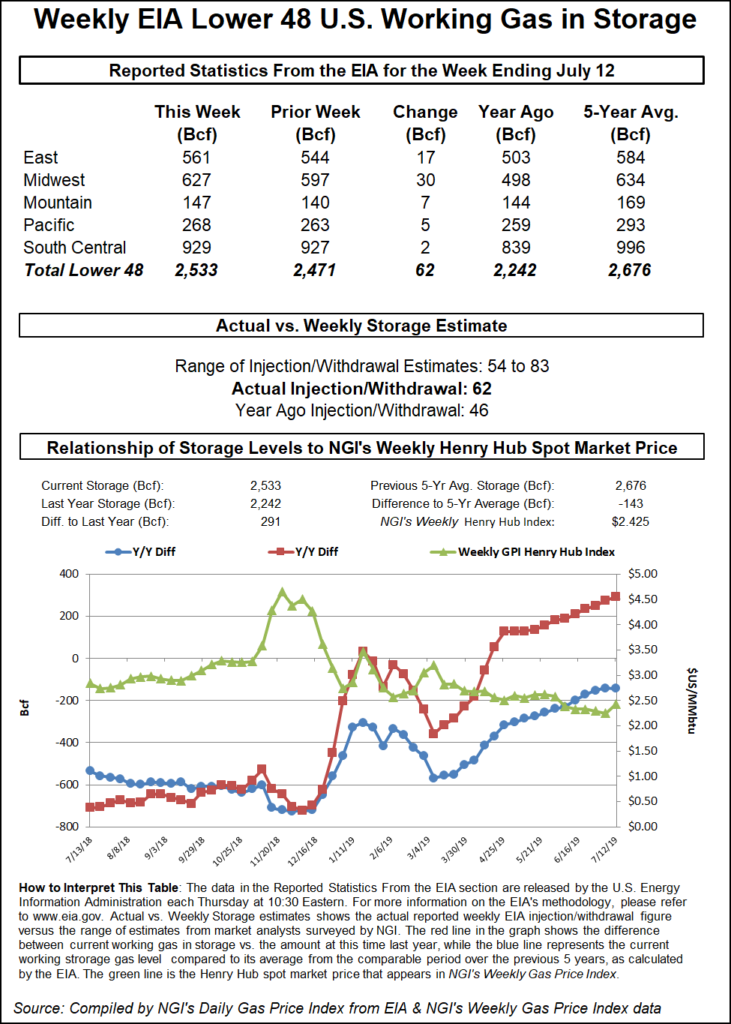 Prices were trading higher early in the day Thursday before “sellers stepped in strongly after the release of the EIA number,” noted Bespoke Weather Services. The forecaster pointed to weaker power burn levels this week “relative to the heat in place” and the prospect of an early start-up for the Gulf Coast Express pipeline out of the Permian Basin as recent bearish developments in the market.

“Our theme remains the same, in that burns need to find more strength on a weather-adjusted basis,” Bespoke said. “We thought the warming of some of the weather models in the 11-15 day might allow $2.30 support to hold, but that was not the case…we could actually see the weather-adjusted burns improve next week, though on an absolute basis, of course, they will be weaker with less heat.”

If guidance next week starts to hint at more heat returning to the outlook, “we could see the backdrop take on a slightly more bullish tone…given that the cooling next week is known to the market at this point, with the unknowns being the weather-adjusted burns along with the pattern beyond the current Day 15.”

The EIA reported a slightly below-average 62 Bcf build into U.S. natural gas stocks Thursday, on the low side of expectations, but it wasn’t enough to frighten the bears prowling the futures market.

The 62 Bcf injection, recorded for the week ended July 12, comes in higher than the 46 Bcf build for the year-ago period but slightly below the five-year average of 63 Bcf. This week’s report marks the first below-average build since injections began in March, EIA historical data show.

Prior to Thursday’s report, estimates had been pointing to a near-average injection close to the actual figure. A Bloomberg survey showed a median 69 Bcf, while a Reuters survey called for a 65 Bcf build. Intercontinental Exchange EIA Financial Weekly Index futures settled Wednesday at 61 Bcf, while NGI’s model predicted a 65 Bcf injection.

By region, the Midwest recorded the largest build of the week at 30 Bcf, followed by the East at 17 Bcf. The Mountain region refilled 7 Bcf, while the Pacific injected 5 Bcf. In the South Central region, a 14 Bcf injection into nonsalt stocks was partially offset by an 11 Bcf withdrawal from salt, according to EIA.

According to analysts with Raymond James & Associates, not including weather-related demand, the 62 Bcf build implies the market was 3.3 Bcf/d looser versus the year-ago period, and balances have averaged 1.9 Bcf/d looser over the past four weeks.

Meanwhile, Gulf of Mexico production is slowly recovering in the wake of former Hurricane Barry, according to the latest estimates from Genscape Inc.

“Regional producers and system operators stated earlier this week that personnel are returning to facilities but that flows could not begin until inspections were completed,” Genscape senior natural gas analyst Rick Margolin said. On Wednesday, “a variety of operators posted notice that inspections are complete.”

Estimates as of early Thursday showed “total Gulf region (offshore Gulf of Mexico, northern and southern Louisiana and neighboring offshore areas) production is up to 9.7 Bcf/d, about 0.8 Bcf/d higher than the hurricane-driven low of 8.9 Bcf/d on July 12. That said, Genscape’s production team estimates there is still about 1.3 Bcf/d of gas shut in.”

Despite widespread sweltering heat over the Lower 48 this week, with temperatures expected to peak over the next few days, spot prices have remained relatively flat. For the most part, that trend continued Thursday, though locations in the Northeast did post gains as forecasts showed the mercury rising in the region.

As Radiant Solutions was calling for Boston to see highs in the 90s over the next couple days, including a high of 97 on Saturday, Algonquin Citygate picked up 24.5 cents to average $2.590. In New York City, where Radiant predicted a high of 94 for Friday and 100 for Saturday, Transco Zone 6 NY added 3.0 cents to $2.440.

A “widespread and dangerous heat wave” was building in intensity over the central and eastern United States Thursday, with the sweltering conditions expected to extend through the weekend, according to the National Weather Service.

“As an upper-level ridge builds, a heat wave is forecast to spread across the central and eastern U.S.,” the forecaster said. “High temperatures in the 100s are expected for the Southern and Central High Plains, with 90s widespread farther east. Where temperatures are in the 90s, high dewpoints will create dangerous heat indices, and Excessive Heat Warnings and Watches and Heat Advisories are in effect for much of the Plains, Mississippi and Ohio Valleys, and the Eastern Seaboard.

“Overnight low temperatures will not provide much relief, with values in the mid to upper 70s to even 80 degrees. Dozens of high minimum temperature records are forecast to be set, with a few record high maximum temperatures possible as well. The heat wave is expected to persist over the weekend.”

Permian producers, who have felt the pinch of severe natural gas takeaway constraints for months, got some good news from Kinder Morgan Inc. (KMI) executives Wednesday. During a conference call to discuss 2Q2019 results, management confirmed the rumors that a full ramp-up of its anticipated Gulf Coast Express natural gas pipeline is expected a week to 10 days earlier than its planned Oct. 1 start date.

The 2 Bcf/d pipeline is expected to provide a much-needed relief valve for Permian associated gas, which has become increasingly stranded because of a lack of takeaway capacity, a situation that, at times, has led to negative pricing in the region.

“The pipe is in the ground, there is still commissioning work going on the compressor and meter stations, but our expectation is for a slightly early in-service date,” KMI CEO Steven Kean said Wednesday.

Analysts with Genscape observed that KMI management “stopped short of officially declaring the line as partially in-service” even as the line-packing process has begun.