Natural gas futures rallied a second day, as traders absorbed a bullish government inventory report and the potential for vulnerable global supplies should the war in Ukraine drag on and the coming summer prove exceptionally hot. The April Nymex gas futures contract jumped 24.2 cents day/day and settled at $4.990/MMBtu. May gained 23.7 cents to $5.021. 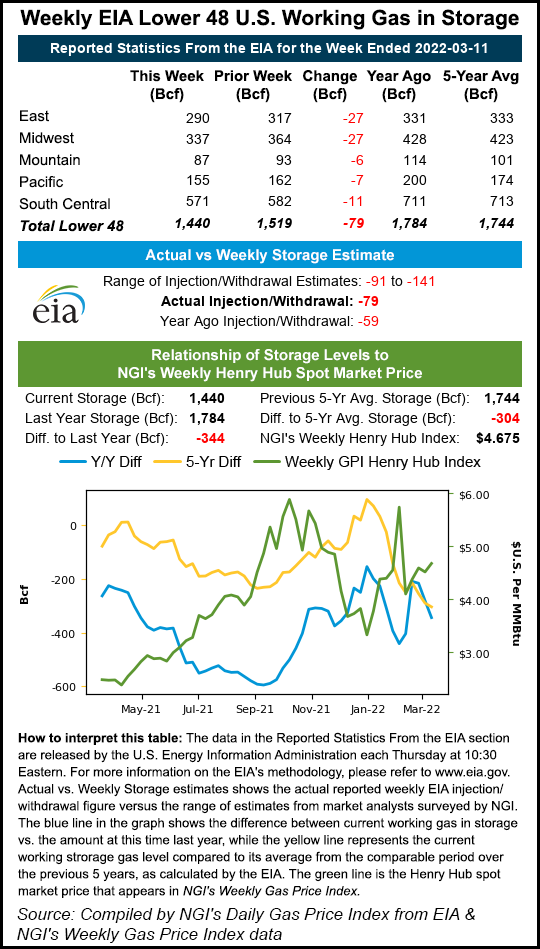 Marex North America LLC’s Steve Blair, a senior account executive, told NGI that while domestic weather forecasts point to modest demand in coming weeks, the market is focused on threats to global supplies amid Russia’s invasion of Ukraine. With European countries currently dependent on Russian gas but vowing to wean themselves in protest of the war, demand for U.S. liquefied natural gas (LNG) is soaring and supporting prices, he said.

Blair noted that American LNG feed gas volumes are consistently topping 13 Bcf and export facilities are running at or near capacity even as spring weather arrives. Volumes exceeded 13.7 Bcf on Thursday, according to NGI data, essentially maxing out. Blair estimated that with more capacity, export volumes could top 15 Bcf to meet global demand, given Europe’s challenges and ongoing calls from parts of Asia for U.S. supplies of the super-chilled fuel.

Even though the United States does not have the ability to ship 15 Bcf/d of LNG, he said, the demand at that level amplifies global supply concerns and bolsters prices.

“This is very much a global market – with high demand for our LNG from two major continents – and to ignore that in any way just doesn’t make sense,” Blair said. “If we were simply a domestic market, then yes, there might not be an explanation for prices where they are. But we are not just a domestic market – not by any stretch of the imagination.”

A seasonally robust withdrawal of natural gas from storage added a dose of complexity to the already intricate supply landscape.

The U.S. Energy Information Administration (EIA) on Thursday reported a pull of 79 Bcf for the week ended March 11. The result exceeded expectations and added fuel to a rally already underway. Prior to the report, predictions pointed to a withdrawal in the low 70s Bcf.

Frigid weather systems blanketed swaths of the nation’s midsection and the East in the covered period, delivering chilly rains and freezing temperatures. LNG export levels also proved strong during the week, in large part because of European demand amid the Russian-Ukraine conflict and the supply worries it has fostered.

The decrease for the last week lowered inventories to 1,440 Bcf. This compared with the year-earlier level of 1,784 Bcf and the five-year average of 1,744 Bcf.

It “is enough to push the end-of-season storage estimate back down under 1,400 Bcf, closer to 1,375-1,380, especially with production still struggling to get back over 93 Bcf,” Bespoke Weather Services said. Output had approached 95 Bcf earlier in March. “If the regime remains tighter-than-expected, it only increases the level of concern regarding difficulty in refilling storage to a comfortable level this summer.

“Our concerns for later this year will remain, given our lean toward a hotter summer this year,” Bespoke added. “That would set the stage for a potential strong, if not explosive, move higher into the second half of summer…especially if prices in Europe remain very high, and we are only pointing to 3,400 or so Bcf for end-of-October storage. Production needs to surprise more to the upside soon.”

The Midwest and East regions both reported a withdrawal of 27 Bcf, leading the inventory declines for last week, according to EIA. The South Central followed with a draw of 11 Bcf. Pacific inventories fell by 7 Bcf, while Mountain region stocks declined by 6 Bcf.

Looking ahead to next week, analysts on The Desk’s online energy platform Enelyst generally expected another withdrawal with next Thursday’s storage report, though likely much smaller given the spring temperatures that have permeated the Lower 48 this week.

Should spring conditions hold late in March and into early April, participants on The Desk said injection season could arrive later this month.

With spring on the horizon, Blair said waning domestic demand could drag on futures. Still, he also said the global supply/demand worries are likely to drive further rallies. Noting this week’s move higher was preceded by a two-day slump, he said speculators have bought into declines since the war started, betting that global supplies will be under pressure and demand strong through the summer.

“This market has a very strong bullish undertone,” Blair said.

“National demand remains very light as warm conditions rule the southern U.S. with highs of 60s to 80s,” NatGasWeather said. It was “also relatively comfortable across most of the East with highs of 50s to 70s, despite a weather system bringing showers to the Mid-Atlantic Coast.”

Looking ahead, regionally cooler air could materialize by the weekend, forecasts showed, with chilly rain and snow tracking out of the Rockies and into the central Plains. This weather front could usher in highs of upper 30s to 50s. But with mild conditions across most of the Lower 48, overall demand is expected to remain below average moving through next week.

Senior meteorologist Michael Shuman of IBM’s The Weather Company forecast a springtime pattern across North America for most of what’s left of March.

“The undulating warmth will support a prolonged stretch of much lower-than-average heating degree days that will help skew the monthly demand to the lower side of normal,” he said.

Farther out, the National Oceanic and Atmospheric Administration (NOAA) said Thursday its spring outlook included expectations for prolonged, persistent drought in the West. In past years, drought minimized hydropower and, in turn, boosted demand for natural gas in the West.

“Severe to exceptional drought has persisted in some areas of the West since the summer of 2020 and drought has expanded to the southern Plains and Lower Mississippi Valley,” said NOAA forecaster Jon Gottschalck. “With nearly 60% of the continental U.S. experiencing minor to exceptional drought conditions, this is the largest drought coverage we’ve seen in the U.S. since 2013.”

The NOAA also forecast above-average temperatures for most of the United States from April to June, spanning the Southwest and Midwest to the East Coast.