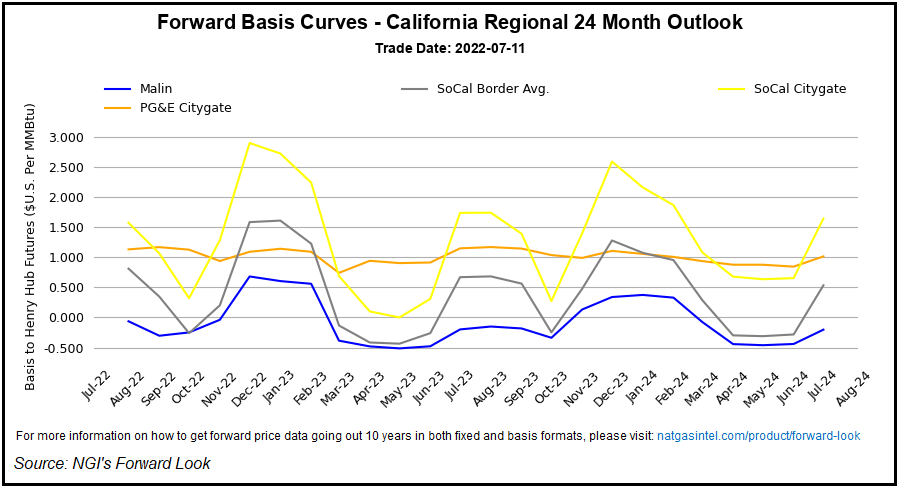 Fixed price trading for August delivery at benchmark Henry Hub surged $1.179 higher week/week to $6.690/MMBtu. That established the baseline for fixed price gains of $1-plus at most Lower 48 hubs during the period.

Based on the latest forecasts Thursday, the back half of July was set to bring “strong to very strong national demand” as a result of widespread summer heat, according to NatGasWeather.

Between Saturday and July 27, “unseasonably hot upper high pressure rules most of the U.S. with highs of 90s and 100s besides the far North,” the firm said. “To our view, the weather data can’t be much hotter” during this time frame, implying risks for subsequent model runs to ease back on demand expectations.

The impact of the toasty temperatures was particularly evident in the Southeast, where a number of hubs saw even steeper markups, resulting in hefty basis gains week/week.

August Nymex futures settled at $6.600 Thursday, off 8.9 cents on the day but up sharply from prices in the mid-$5.00 range just over a week earlier. Strong summer heat helped lift the prompt contract higher to finish the week. It settled Friday at $7.016.

The July 7-13 trading period included a major bullish storage report miss from the Energy Information Administration’s inventory data for the week ended July 1. That sparked a sizable rally for Nymex futures, a major contributor to the step-change higher in the natural gas forwards market.

Coming off a pair of larger-than-expected prints, the lean injection figure that landed on trading desks on July 7 forced a reassessment of what had seemed a significant loosening of the supply/demand balance following the unexpected outage at the 2.0 Bcf/d Freeport liquefied natural gas terminal. August Nymex prices rallied 78.7 cents on the day as bulls regained the momentum.

By contrast, the most recent EIA report Thursday, covering the week ended July 8, landed close to pre-report expectations. EIA reported a 58 Bcf injection for the period.

The print “suggested last week’s bullish EIA miss was a one-off number and the balance is in fact a little looser than it showed,” NatGasWeather said.

“Another pair of midstream incidents, this time across Kinder Morgan’s Tennessee Gas Pipeline — one in Pennsylvania potentially limiting 0.3 Bcf/d of supply and another in Alabama — may impact near-term gas deliverability,” Rubin said in a note to clients Thursday.

“Although rerouting supply across other pipelines may help alleviate the magnitude of impacts, there have now been at least four notable midstream events in the past two weeks,” Rubin said. “Early cycle pipeline nominations suggest production could be off as much as 1.6-1.8 Bcf/d from the first week of July.”

During a week of broad-based gains, there were some basis discounts regionally during the July 7-13 trading period, notably in the Northeast and in Western Canada.

Updated rig numbers from Enverus as of Wednesday showed a four-rig week/week decline for the Marcellus and Utica shale region, leaving the Appalachian region as a whole with 56 rigs for the period. Despite those declines, the firm’s overall tally of U.S. rigs rose five units week/week to 826 as of Wednesday.

“The count is up 2% in the last month and up 56% year/year,” Enverus analysts said. “The count reached as high as 836 in the last week, an increase of four rigs over the prior week’s peak.”

Maintenance on the Westcoast system could result in a “sharp decrease” in flows through the Fort Nelson mainline between now and July 27, according to Wood Mackenzie.

Over the prior 30-days, receipts onto the Fort Nelson mainline averaged 1.2 Bcf/d and maxed out at 1.3 Bcf, according to the analyst. 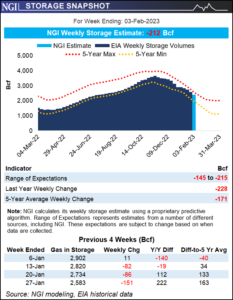