The best producing areas around the South-Central Oklahoma Oil Province (SCOOP) may be “on par” with the Eagle Ford and Bakken shales, able to generate more than 1 million boe/d by 2020, according to an analysis by Wood Mackenzie Ltd. 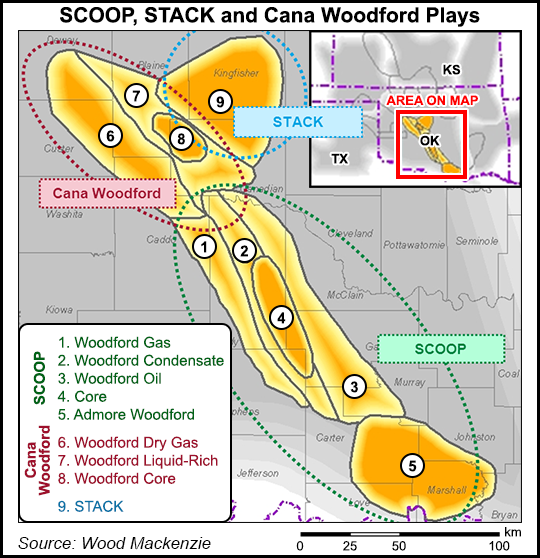 “In the context of things, the macro environment being what it is right now, this is a fantastic news story,” said Wood Mackenzie Lower 48 upstream analyst Brandon Mikael. His team’s analysis broke down into nine sub-play areas the SCOOP, also known as the STACK and Cana-Woodford plays, within the Anadarko and Ardmore basins.

Producers have given their own spin on the region, with most referring to it as the SCOOP, but it’s also known as the STACK because of the numerous stacked formations, and the Cana-Woodford.

While the names seemingly change by county, one thing that unites them is that the Woodford Shale is prospective across all of them.

“The area has some of the largest producing wells in the Lower 48, bigger than the Permian and Bakken and comparable to the best parts of the Eagle Ford,” Mikael said.

Oklahoma’s drilling region “will see drawbacks,” Mikael said. However, “production won’t fall off by much and we expect it to bounce back quickly in 2016. It’s still one of the most exciting growth areas in the Lower 48 because of the well productivity and its stacked pay potential.”

SCOOP’s wells are up to competing “with the Eagle Fords and the Bakkens of the world,” Mikael told NGI’s Shale Daily. The onshore drilling sector may be “in a lull right now, but it’s going to bounce back.” In central Oklahoma, “the wells are so big, and the economics are so good…It’s the kind of story that gets overlooked, but there are economic wells to be drilled.”

Of course, it’s going to take a lot more investment by exploration and production (E&P) companies. However, “even at $49.11/bbl, you can get a return on your money,” Mikael said. West Texas Intermediate/Brent oil prices have fallen below $50/bbl in recent weeks.

One of the key reasons that the SCOOP is so compelling is existing infrastructure, which gives it a leg up on the Rockies and the Bakken, Mikael said. “That’s something we spent a lot of time on…There’s a lot of existing infrastructure there because Oklahoma has nearly a century of oil and gas development…You can get it down to the Gulf Coast, to Carthage, over to Louisiana, and on to the export hubs…It’s fantastically well placed,” without the $2-8 transport fees tacked on from delivering oil and liquids from the Bakken or Niobrara formations.

So much production is expected from SCOOP that eventually, existing infrastructure won’t be enough, which should provide new opportunities, Mikael said.

“If we look toward the end of this decade, the early part of the next decade, we think that there is the potential to begin running into midstream constraints. Gas processing capacity begins to become stretched. That will provide big opportunities for a lot of gas processors, especially the master limited partnerships, as a new area to invest in…”

The Anadarko and Ardmore basins were “misunderstood” and neglected for a time by drillers who favored the larger North Dakota and West Texas plays, Mikael said. The various formation’s rocks are “unique,” with an extension into four different basins. “The Woodford is one of the oldest shale plays, but the thing about it is that even as some have tended to write it off, it keeps coming back within new areas in a big way… “

Wood Mackenzie’s analysis of the nine sub-plays found that the Springer had the “best economics but limited running room” The $41.00/bbl breakeven “is lower than the Bakken Parshall Sanish and Eagle Ford Karnes trough sub-plays (widely regarded as the best parts of those plays), which breakeven at $45/bbl and $48/bbl, respectively.”

This year, upstream spending in SCOOP is expected to be more than $4 billion.

“While operators will experience near-term relief in drilling and completion costs in response to lower commodity prices, the benefits are somewhat mitigated by an increasing concentration of activity in core areas where well costs trend higher due to deeper wells and longer lateral lengths,” Wood Mackenzie said.

The horizontal rig count is seen averaging 60 this year, a pullback from 2014’s peak of 92, as operators “pivot from delineating unproven areas to focusing on drilling to hold core acreage.”

Economics in the “noncore sub-plays are challenged at current prices” because of “challenging, heterogeneous geology that contributes to the inferior well productivity relative to the best parts of the play.”

Production is seen moving toward more oil as SCOOP and Stack development outpaces Cana-Woodford. “While crude and condensate makes up 22% of the overall production mix in 2015, we expect this to grow to 26% by 2020.”

Wood Mackenzie isn’t in the game of predicting when activity could get a boost in the Midcontinent or anywhere else as commodity prices fall. However, Mikael said most of the operators driving the bulk of the activity in the SCOOP, such as CEO Harold Hamm’s Continental, “time and time again understand how to run in good times and bad times…What we are going through right now, it’s tragic, but it’s old hat to a lot of the E&Ps that have been around. And this is one of a handful of regions that will bounce back quickly, in part due to the regional experience of the leading companies.”