The head of oilfield services (OFS) giant Schlumberger Ltd. said the company is “seizing the beginning of the upcycle,” with international activity expected to lead growth — and North America set to moderate — in the continued recovery from Covid-19. 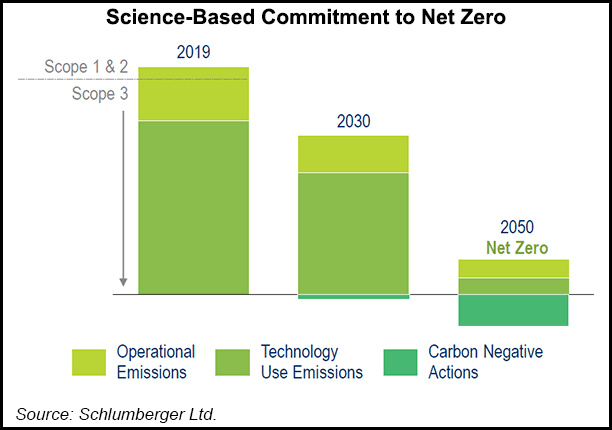 On the 2Q2021 earnings call with investors Friday, CEO Olivier Le Peuch said that while the rise of the Covid-19 Delta variant and resurgence of related disruptions could impact the pace of economic reopening, recent market projections continue to affirm an improving global economic outlook.

“Global GDP growth is now expected to approach 6% in 2021 and more than 4% in 2022, which will continue to drive a progressive recovery of oil demand,” the CEO told analysts on the second quarter 2021 earnings call held Friday.

This outlook is supported by recent oil demand updates, which reflect the anticipation of a wider vaccine-enabled recovery, improved mobility and additional fiscal stimulus in large economies through the second half of the year, according to Le Peuch. Longer term, the International Energy Agency’s latest Oil Market Report projects that global oil demand would reach 100 million b/d and surpass pre-Covid levels by the end of 2022, in the absence of further policy change.

“With oil prices at elevated levels, the supply response to this demand recovery is developing broadly, as anticipated,” the company chief said. This combination has resulted in a call on short-cycle production as well as an uptick in long-cycle projects, which is being reflected in new final investment decisions as well as “the encouraging recovery” in both offshore development and near-field exploration activity through the second quarter.

In North America, the supply response is reflected in the rig count and fracturing fleet trends, which sustained strong growth through the first half of the year. Private operators led activity growth, Le Peuch said. This resulted from the acceleration of drilled but uncompleted (DUC) completions and increased drilling activity to replenish DUC inventory.

“By contrast, the embrace of capital discipline by the public operators is highlighted by the rig count still being significantly below the 1Q2020 total,” despite West Texas Intermediate crude oil prices exceeding pre-pandemic levels. “In this context, despite a solid activity growth outlook, we maintain our view that the North American market will be structurally smaller than in previous cycles, as a consequence of capital discipline and industry consolidation.”

International markets, meanwhile, present a “sustained growth opportunity, particularly in the low-cost, advantaged basins, according to Le Peuch. “We remain constructive on the structural pull on international supply and the resulting activity impact. This was already visible in the second quarter, with a strong seasonal rebound and offshore recovery, despite the impact of Covid disruptions in parts of Asia and the Middle East.”

Looking ahead, the OFS company sees favorable conditions for “durable” investment growth, driven by the combination of actions by national oil companies, internationally focused investment by public E&P operators and the expectation of continued supply discipline by allied members of the Organization of the Petroleum Exporting Countries. “The current pace of international tendering, contract awards and increasing book-to-bill ratios support this view,” Le Peuch said.

For 2Q2021, international revenue of $4.5 billion was up 7% sequentially, outperforming the rig count growth. The increase took place in all four of Schlumberger’s divisions and was driven by activity that strengthened beyond the impact of the seasonal recovery in the Northern Hemisphere, leading to double-digit sequential revenue growth in several countries, according to the company.

Revenue in North America rose 11% sequentially to $1.1 billion, including a 19% increase in U.S. land revenue because of higher drilling activity and increased sales of well and surface production systems. Well Construction revenue in U.S. land grew more than 30% sequentially, outperforming the rig count growth of 16%. In addition, Canada land revenue increased despite the spring breakup due to higher asset performance solutions project revenue. Offshore revenue was slightly higher because of sales of subsea production systems.

In addition to the impact of operating leverage, offshore activity and technology also contributed to Schlumberger’s solid bottom line during the quarter.

The offshore rebound in 2Q2021 was led by high single-digit deepwater activity growth, particularly in Brazil, and also included a mid-teens growth in exploration and appraisal activity across Europe and the Middle East, Le Peuch said. “These market conditions presented a favorable mix and resulted in higher revenue quality for both Reservoir Performance and Well Construction.”

At the same time, the rate of adoption by customers of the company’s latest-generation technology increased by one-third during the quarter, it said. This included Transition Technologies, digital and “fit-for-basin” solutions, which benefited all divisions and most basins.

“This is a clear recognition of the performance impact our technologies generate for our customers, and it gives us increased confidence in the contribution of technology adoption toward margin expansion in this upcycle,” Le Peuch told analysts.

The Road To Net Zero

Schlumberger during the quarter also continued to execute its long-term strategy with advances in Digital and New Energy through its own technology and partnerships.

The OFS provider last month partnered with IBM to launch a commercial hybrid cloud to allow energy operators global access. Under the program, E&P customers would gain access to the open subsurface data universe in locations “where data residency requirements and local regulations may affect the use of a global public cloud.”

It also is collaborating with Panasonic North America to develop a battery-grade lithium production process in Clayton Valley, NV.

Meanwhile, Schlumberger became the latest energy company to commit to reaching net-zero carbon emissions across the oil and natural gas chain by 2050. Its decarbonization plan focuses on reducing emissions from direct, indirect and customer sources, i.e. Scope 1, 2 and 3 emissions. It also launched a Transition Technologies portfolio, which would aid its clients in meeting their climate change ambitions.

“Overall, the second-quarter performance and the progress we made on our strategic targets align very well with our long-term financial ambition,” Le Peuch said. “We will seize the industry upcycle with strength in our core, will leverage the accretive impact of digital, and will continue building our portfolio of low-carbon energy ventures.”

“With this outlook for the third quarter, we remain confident in achieving double-digit international growth in the second half of 2021 when compared to the second half of 2020,” Le Peuch said. “As a consequence, and absent further Covid setbacks in operational recovery, we now foresee full-year revenue growth, both internationally and in North America, when excluding the impact of divestitures.”

Furthermore, management for the OFS company “can now clearly see a path to the high end of” its full year earnings margin expansion guidance for 2021.

Looking further ahead, the fundamentals remain very favorable, according to Le Peuch. A growing economic rebound, supportive oil prices and demand/supply outlook represent “a set of unique conditions that will support an exceptional growth cycle.”

This cycle will be broad-based, the CEO said, “across geographies and operational environments, land, offshore, North America and international markets.” The second quarter was a strong indication of the future outlook, “and a testament of our restored earnings power under these conditions.”

During the quarter, it generated $1.2 billion of cash flow from operations and positive free cash flow of $869 million, despite severance payments of $72 million. Net debt decreased sequentially by $632 million to $13 billion, the lowest level since 4Q2017. Capital investments during the quarter totaled $351 million. For the full year, Schlumberger expects to spend between 1.5 to 1.7 billion on capital investments.