Recent oil price volatility has made exploration and production (E&P) companies skittish, and the uncertainty around their spending plans may delay the broad-based recovery expected only three months ago, Schlumberger Ltd. CEO Paal Kibsgaard said Friday. 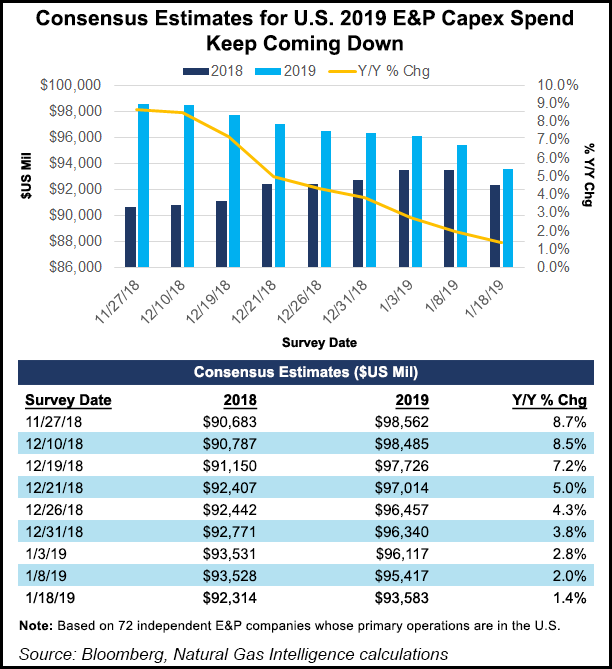 During a conference call with investors to discuss fourth quarter and full-year results, as well as provide some perspective on what the No. 1 oilfield services company is hearing from E&P customers, Kibsgaard noted that some E&Ps already have reduced their capital expenditure (capex) plans for 2019.

Recent discussions offer “clear signs that E&P investments are starting to normalize and reflect a more sustainable financial stewardship of the global resource base. For the North America land E&P operators, this means that future investments will likely be much closer to the level that can be covered by free cash flow.”

Assuming increased capital discipline continues in 2019, and if West Texas Intermediate oil prices steadily recover to average around same realized level as 2018, “we expect E&P investments in U.S. land to be flat to slightly down compared to 2018, with a relatively slow start to the year.”

It is likely, Kibsgaard said, that U.S. E&Ps will “gradually lower drilling activity and instead focus investments on growing down the large inventory on drilled and completed wells. This approach would still drive production growth from U.S. land in 2019, but likely at a substantially lower rate than the 1.9 million b/d seen in 2018 and potentially with a further reduction in the growth rate in 2020.”

Other issues in the Lower 48 also are on the horizon, as “an increasing percentage of the new wells drilled are being consumed to offset the steep decline from the existing production base.

“Third-party analysis shows that in 2018, this number was 54% of total capex, and it is expected to increase to 75% in 2021, clearly demonstrating the unavoidable effect of shale oil production.”

In addition, “emerging challenges” are underway in parent and child wells, which impacts production per well.

Drilling steadily is stepping out from core acreage, while lateral lengths and proppant/stage are “starting to plateau,” which means “we could be facing a more moderate growth in U.S. shale production in the coming years than what the most optimistic views have been suggesting.”

Last year ended with a “near perfect storm,” as oil prices turned south. The price dive was blamed mostly by a surge in U.S. onshore production, “surprising to the upside…” resulting in “significantly lower land activity in North America” to the end of December. Most of the slump was seen in the Permian Basin, as activity was impacted by the domino of production takeaway constraints that began in the middle of 2018.

North American revenue in 4Q2018 decreased 12% from the third quarter, “as customers dramatically cut fracturing activity in response to lower oil prices,” Kibsgaard said. “Although we were expecting weakness in the Permian, facts were exacerbated by a further drop in the oil prices.”

In response to the sudden downturn, Schlumberger warm-stacked fracture fleets in its North American land business in the second half of the fourth quarter and instead focused on securing dedicated contracts for the first half of 2019 early in the tendering cycle. Clipping the fracturing fleet resulted in revenue from the onshore pressure pumping business OneStim declining by 25%.

“U.S. land drilling activity on the other hand proved robust during the quarter, with the rig count being largely flat sequentially and the wells drilled for rig remaining stable, despite average lateral lengths continuing to increase,” said the CEO. “In this market, our operational efficiency, new technologies and broad range of business models helped drive drilling and measurements revenue higher in both the U.S. and Canada.”

This year, North American land activity should follow “a slow but steady recovery,” with a lingering impact from the pricing reset that took place in 4Q2018.

“For drilling we expect some impacts…from a potentially lower rig count” in North America, Kibsgaard said. “However, our high-tech drilling business remains sold-out and is still at a relatively low market penetration and should therefore be quite insulated from a lower rig activity.”

The U.S. artificial lift business, which operates at the 12-to-18 month lag from the hydraulic fracturing business, also is expecting a “solid year.”

Meanwhile, the company’s international business has begun to reset following “four years of underinvestment and a focus on maximizing cash flow.” National oil companies and independents have come to the conclusion, the CEO said, that they need to fund their resource base simply to maintain production at current levels.

“For Schlumberger, this means that even with the current oil prices, we expect solid, single-digit growth in the international markets, while in North America land, the increased cost of capital and focus on aligning investments closer to free cash flow has introduced more uncertainty to the outlook for both drilling and production activity.”

To cope with uncertainty in the months ahead, the Houston-based OFS has built “significant flexibility into our operating plan for 2019, which gives us the means and confidence to address any investment and activity scenario,” Kibsgaard said. “Furthermore, the foundation for our 2019 plans is a clear commitment to generate sufficient cash flow to cover all our business needs, without increasing net debt.”