North American onshore drilling carried the “earnings growth torch” for Schlumberger Ltd. in the first quarter, even though softer pressure pumping pricing and activity caused less equipment to be reactivated than expected.

The No. 1 oilfield services operator kicked off 1Q2018 earnings season for the sector on Friday, with Baker Hughes Inc., a GE company, also reporting its results. Halliburton Co. is set to issue its results on Monday.

“In spite of this, we continued to deploy available fracturing assets, including equipment from our newly acquired capacity,” i.e., Weatherford International plc’s U.S. fracture business, which Schlumberger acquired earlier this year and its estimated 1 million hydraulic hp business.

“Onshore in North America, we experienced a slow start to the quarter due to freezing weather and as many shale oil operators took a conservative approach to ramping up activity after the holidays,” said Executive Vice President Patrick Schorn of New Ventures. “However, with oil prices stabilizing well above $60…drilling and pressure pumping activity started to ramp up in the second half of the quarter and showed healthy first quarter exit rates.”

The U.S. land hydraulic fracturing market should continue to improve during the second quarter, “both in terms of pricing and in operational efficiency and, therefore, we are continuing with our aggressive fleet reactivation and recommissioning program,” Kibsgaard said.

“In this market, we continue to be sold out to our differentiated directional and drillbit technologies as we again posted strong growth in the first quarter, and we still command a solid pricing premium…”

With more OFS operators adding horsepower capacity for onshore producers, the North American pressure pumping market should be nearly balanced in the short-term “from an equipment standpoint,” said the CEO.

“This means that fracture pricing will arguably be rangebound and driven by short-term or local supply demand variations and that any upwards pricing movement will likely be limited to passing on people and supply chain cost inflation,” Kibsgaard said.

Schlumberger fracture fleet additions were less than expected in the first three months because market overcapacity led to lower utilization, inefficiencies and softer pricing, Schorn said. “These headwinds were compounded by inefficiencies and increased costs associated with rail, logistical issues impacting the supply of our sand in parts of our operations…”

What is clear to Schlumberger’s management team is that the global oil market has returned to balance, following the voluntary reductions in output by the Organization of the Petroleum Exporting Countries (OPEC) and its allies, including Russia.

However, underspending since late 2015 by exploration and production (E&P) companies could lead to worldwide oil supply shortages in the not-too-distant future. U.S. unconventional operators also face other challenges, said the CEO.

“At present, the collective spare capacity of the three core OPEC countries is only in the range of 3 million b/d,” he said. “There are also emerging questions around whether the very bullish production growth outlook for U.S. shale oil can be fully met as the industry is coming to face challenges linked to well-to-well interference as more infill drilling takes place, lower production per well as drilling increasingly steps out from Tier 1 acreage, as operators look to overcome growing infrastructure constraints, and as refineries approach current processing capacity for light oil.”

Based on global E&P capital investment plans and current worldwide oil stocks, “we believe it is increasingly likely that the industry will face growing supply challenges over the coming years, and a significant increase in global E&P investments will be required to minimize the impending production deficit,” he said.

“The key indicator for this evolving trend continues to be global oil inventory levels and not U.S. inventories alone. Significant weekly swings in import and export levels often mask the actual evolution of the underlying U.S. supply and demand.”

During the quarter, Schlumberger repurchased 1.4 million shares of its common stock at an average price of $69.79/share, for a total purchase price of $97 million. The board also has approved a quarterly cash dividend of 50 cents/share payable beginning in July. 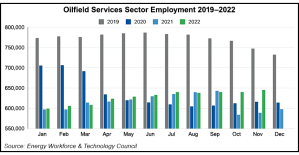