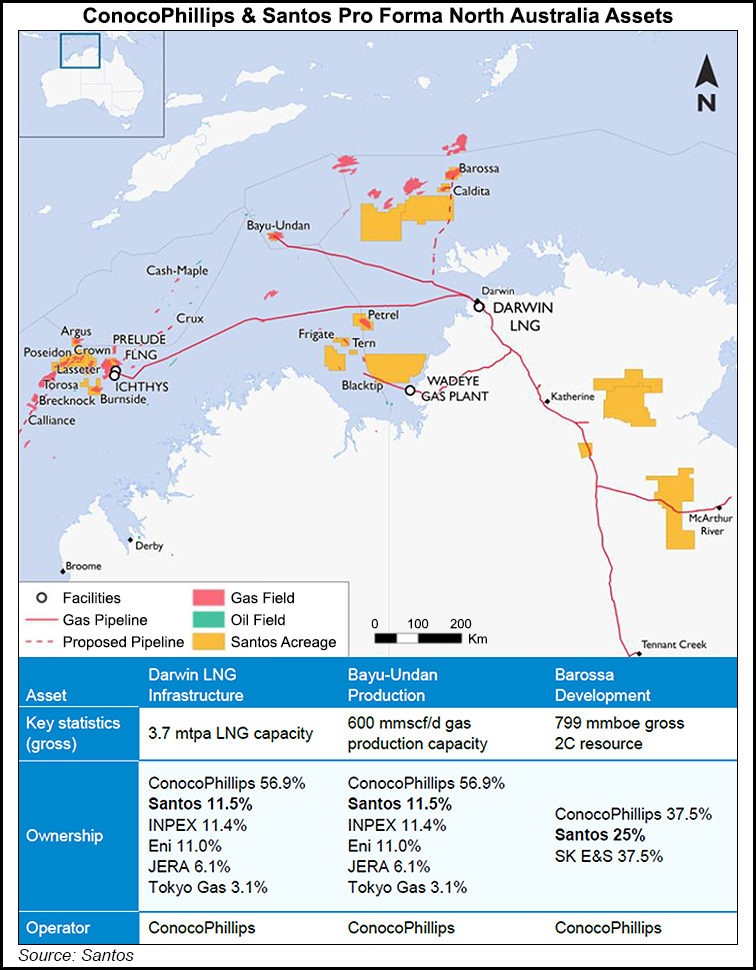 The acquisition includes operating interests in the Darwin liquefied natural gas (LNG) project, and the Bayu-Undan, Barossa and Poseidon gas fields, plus a $75 million contingent payment subject to a final investment decision on Barossa.

The deal, which caught many analysts by surprise, would be finalized in the first quarter of 2020 and would boost Santos’ earnings per share by 16% and increase its production by 25% in 2020, the company said. It adds to the company’s stakes in the Gladstone LNG (GLNG) project and PNG LNG in Papua New Guinea.

Santos plans to grow Darwin LNG capacity by up to 10 million metric tons/year (mmty) from the current 3.7 mmty. Over the long term, the onshore gas shale reserves in the Beetaloo and McArthur Basins could be processed through the Darwin project, said Santos CEO Kevin Gallagher.

“The acquisition of these assets fully aligns with Santos’ growth strategy to build on existing infrastructure positions, while advancing our aim to be a leading regional LNG supplier,” Gallagher said. “This acquisition delivers operatorship and control of strategic LNG infrastructure at Darwin, with approvals in place supporting expansion.”

The deal will also help both companies focus more on their respective domestic production goals. Houston-based ConocoPhillips aims to focus more on shale development in the United States, while Santos has been expanding its footprint in the Australian oil and gas market for the past two years. Santos acquired Quadrant Energy for $2.15 billion in 2018, turning the company into a major supplier of gas into the Western Australian market.

Santos’ acquisition of ConocoPhillips’ northern Australia assets marks a major turn for the company from the financial doldrums of just a few years ago. The company was bloodied in the roiling of global oil markets when crude prices plunged from over $100 per barrel in mid-2014 to dipping below the $30 price point in early 2016. Santos was also building its capital-intensive GLNG project in Queensland, increasing debt levels in the process. Santos stock on the Australian Stock Exchange fell from a peak of AUS$13.24 to below AUS$3 per share in 2016.

As a result of its low valuation, Santos became the target of a number of hostile take-overs, including a $5.15 billion takeover attempt by Scepter Partners, a private equity firm backed by sovereign investment funds. In 2018, just three months before Santos announced the Quadrant Energy purchase, it fended off a $10.9 billion takeover attempt by Houston-based Harbour Energy.

After the Harbour Energy takeover rejection, Santos’ stock price dropped by 8.5%. But strengthening oil prices and over-performance at GLNG, as well as reliable predictions for its South Australian Cooper basin project, boosted the company’s share price. Eventually, Santos pricing was above what most firms were willing to pay for its acquisition.

Santos posted a larger than expected net profit of $630 million in 2018, compared to a loss of $360 million the year before. Santos reported record interim underlying profit of $411 million for the first half of 2019.

Santos already has growing business ties with Chinese energy firms. Shanghai-based ENN Energy Group, which includes major LNG and gas distribution in China, is the largest single shareholder in Santos with an 11.7% stake. The tie up with one of China’s top gas end-users was called a “marriage made in heaven” by Gallagher. China receives about 45% of its LNG from Australia, with that amount to increase as the trade war between Washington and Beijing, along with a 25% tariff on LNG from the United States, persists.

Aramco Sells 49% Stake in Natural Gas Infrastructure in $15.5B Deal with BlackRock-Led Consortium