SandRidge Energy Inc. carried out zero drilling activity on its assets in the Midcontinent and in Colorado last year, causing production to wither, according to its 2020 annual report. 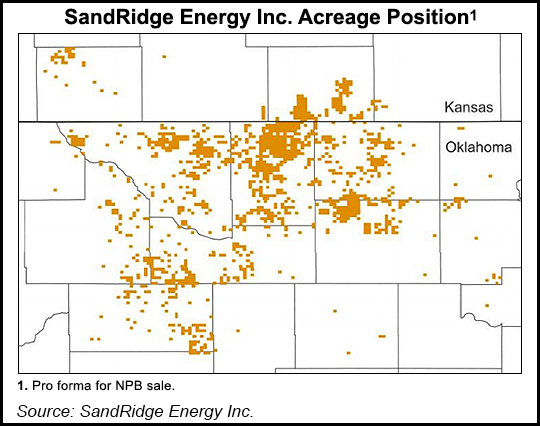 The downward trend is expected to continue sharply in 2021, as SandRidge plans to cut total output further to between 4.8 million boe and 6.2 million boe, management said in issuing its 4Q2020 results.

During the 4Q2020 earnings call, CEO Carl Giesler said the company had improved its cash position over the past year after laying off around 170 workers, selling its headquarters building in Oklahoma City, and selling its North Park Basin assets in Colorado, which was completed last month.

The cash improvement puts the company in a good position to pursue mergers and acquisitions in the Midcontinent, though it still has about $20 million drawn on its $30 million credit facility, Giesler said.

During the call, Giesler also addressed the deep freeze in mid-February, which caused widespread power outages in several states including Oklahoma, causing some production to go offline. SandRidge managed to keep more than half of its Midcontinent production online during the period, Giesler said.

“That’s something that could have been a lot worse and certainly was for some of our peers,” he said.

CFO Salah Gamoudi said SandRidge was still working out the details with its primary purchaser, Targa Resources Corp., on how the freeze affected pricing, and expects to have a better understanding in the next few weeks.

The bulk of SandRidge’s output came from the Midcontinent acreage in Oklahoma and Kansas, where production totaled 1.8 million boe in 4Q2020, mostly natural gas (52%), with 34% NGLs and 14% oil. For the full year, the assets produced  7.8 million boe, half in natural gas, with 35% oil and 35% NGLs.

During 4Q2020 SandRidge’s realized natural gas price was down sharply from a year earlier at 58 cents/Mcf from $1.22.

Last year, the company slashed its capital expenditures (capex) to a range of $4 million and $9 million from $162 million in 2019 to cope with historically low commodity prices and weak demand driven by the coronavirus pandemic. This year it plans to spend $5-10 million.

The company, which held about 380,000 net acres in Oklahoma and Kansas at the end of 2020, has been plagued by a number of upsets in recent years, including a 2016 bankruptcy filing, a successful push in 2017 by activist investor Carl Icahn to reject a planned takeover of Bonanza Creek Energy Inc., and the 2018 ouster of CEO James Bennett and CFO Julian Bott.