SandRidge Energy Inc.’s revamped board of directors is making good on its promise to review the company’s strategy and costs — including a potential decrease in rig count — and allegations made against embattled CEO Tom Ward by hedge fund TPG-Axon Capital. 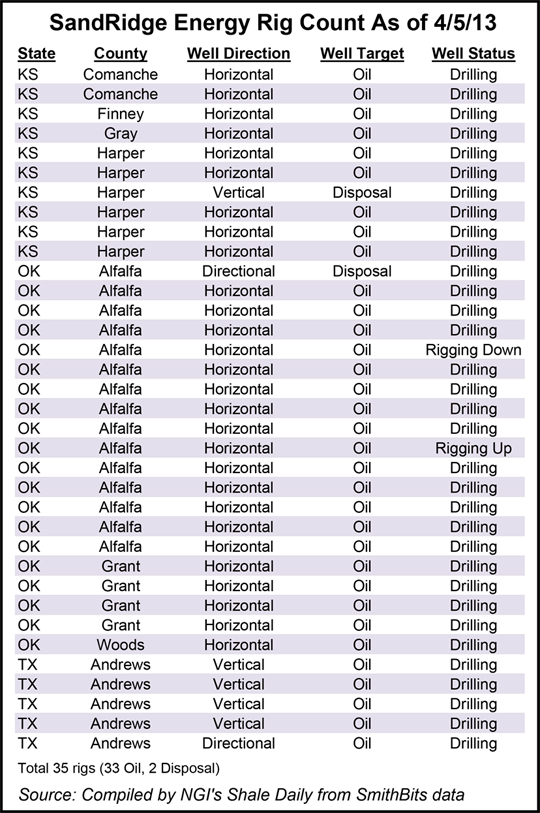 After months of haggling, TPG-Axon, which owns 7.3% of outstanding SandRidge shares, last month gained a large measure of the changes it had urged at the Oklahoma City-based company, reaching a settlement that included the addition of four TPG-Axon nominees to the board (see Shale Daily, March 22). The new members of the board were subsequently appointed chairs of the board’s compensation, audit, strategy and planning, and nominating and governance committees.

The board has already agreed to sell company planes “and significantly reduc[e] advertising and sponsorship expenditures,” SandRidge said Monday.

The strategy and planning committee “has met several times to review potential adjustments to the company’s planned capital and operating expenditures, including reductions in rig count and general and administrative expenses.”

SandRidge had 35 rigs — 33 drilling, one rigging up and one rigging down — as of April 4, according to SmithBits data. All but two of those rigs were targeting oil in Kansas, Oklahoma or Texas; the company also had two disposal rigs.

The committee is expected to complete its initial review and make recommendations to the full board soon, and is evaluating “a variety of options for addressing the company’s future capital needs and lessening any funding shortfall, including potential asset monetizations.”

The audit committee has engaged an independent law firm to review by mid-June shareholder allegations relating to transactions in oil and gas properties in the Mississippian Lime Formation by Ward “and entities affiliated with members of his family.” TPG-Axon has alleged that a company controlled by Ward’s children controls roughly 475,000 acres in the Mississippian near SandRidge operations (see Shale Daily, Feb. 21). That acreage count would make the private investment company, WCT Resources, the fifth largest E&P company in the Mississippian, according to TPG-Axon, which said it is “concerned” with the scale of WCT’s involvement in the play and by the “suspicious timing” of WCT’s land purchases. Several SandRidge shareholders have filed lawsuits accusing Ward of competing with SandRidge for mineral rights and acreage in the Mississippian (see Shale Daily, April 1).

Prior to the company’s settlement with TPG-Axon, the board said it had “found no evidence of wrongdoing” regarding SandRidge’s transactions with WCT Resources, which “is an independent company; no person affiliated with SandRidge has any control over WCT Resources activities.”

“Dave has been an invaluable member of the executive team over the last two years,” said SandRidge president James Bennett. “His leadership and rigorous focus on returns have been critical to our success in the Mississippian play. His teams have secured multiple competitive advantages in the region and positioned us as the lowest cost developer and most efficient operator there.”