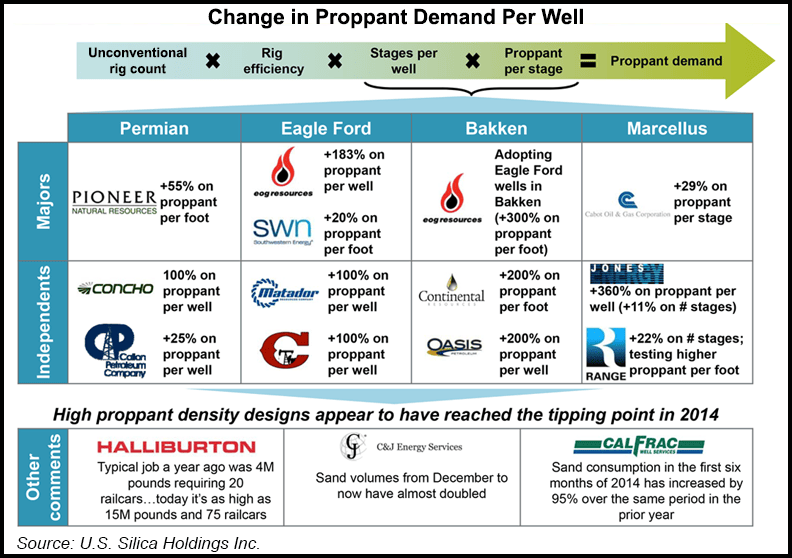 “Based on conversations with our customers, we believe that a step change is occurring with regard to the volumes of sand being used per well, which translates into significant demand for our products,” said CEO Bryan Shinn. “These new capacity expansions will enable us to keep pace with the market and ensure that our customers have ample products to satisfy their needs.”

Shinn and his management team held court on Wednesday during an investor conference to discuss strategic plans for the oil and gas division, as well as its industrial unit.

The biggest expansions relate to oil and gas, which is at a relentless pace. The company has two new projects underway. The biggest is a 3 million ton/year frack sand mine and plant in Wisconsin and associated in-basin transloads. The $150 million project would be sited on a Class 1 railroad and be online by mid-2016.

An 800,000 ton/year expansion also was given the nod for U.S. Silica’s Pacific, MO plant, driven primarily by the oil and gas market’s increased used of fine grade products. The $33 million expansion would include a flagship transload to support the additional volumes. The Pacific expansion, with access to the Union Pacific and BNSF railroads, and barge systems, should be in operation by the second half of 2015.

There’s been a big turnaround for rig counts, well counts and proppant per well, said Vice President Don Weinheimer, who manages the oil and gas segment.

“High proppant density designs appear to have reached the tipping point in 2014,” Weinheimer said. For example:

U.S. Silica already has added four transloads this year, with seven transloads and four expansions planned for 2015, said Shinn. The company achieved record sales in 2Q2014 and it’s “on pace to sell out by 2016.” The company has added high velocity transloads and established a “flagship in every basin,” and it’s gaining market share on logistics and customer support.

Utica Shale sales ramped up earlier than expected, he noted. As well, 13 products and applications have been launched and 37 products are in development.

U.S. Silica currently has 70% of its customers under contract to lock in volumes at attractive margins, which is what customers want, Weinheimer noted. It allows the company to gain efficiencies in production and supply chain planning, and it takes some risk off the table. The company also sells a portion of its sand on the spot market to capture additional pricing.

The Frederick, MD-based company is one of the largest domestic producers of commercial silica, a specialized mineral used in the proppants pumping market.

The company has increased its earnings guidance for 2014 to $230-240 million from $215-225 million because of its growing market strength. Last year, the CEO forecast that earnings would double by 2016, but he said 2013 earnings should double in 2015. Last year he also forecast a one-point gain in market share every year, but U.S. Silica should gain two points this year alone.