About 90% of Sanchez Energy Corp.’s drilling and completion spending this year will target the Eagle Ford Shale, with the remainder going to the Tuscaloosa Marine Shale (TMS) where the company expects industry activity, and learning, to accelerate. 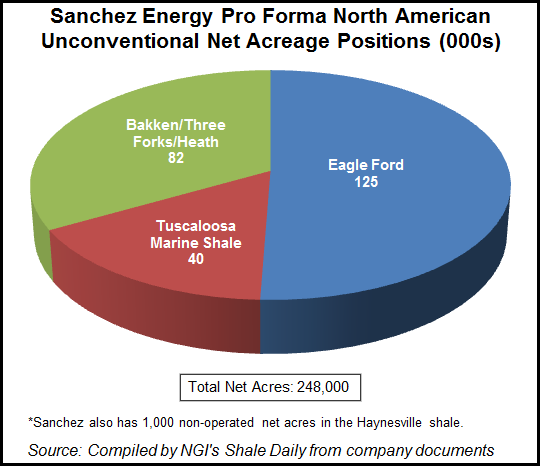 “All of our core Eagle Ford positions are performing at or above our expectations and are in full-scale development mode,” said CEO Tony Sanchez. “Our focus in 2014 is to sustain the momentum generated from our successful transformation into a manufacturing-focused resource exploiter.”

The overall capital plan is for spending of $650-700 million, with 95% funding the drilling and completion of about 70 net wells and the remainder going to facilities, leasing and seismic. “Modest borrowings” along with cash flow and cash on hand would fund the program.

“We plan to focus more of our capital spending on our operated assets in 2014 where we can directly control the pace and timing of our activities,” the CEO said. “Less than 25% of our total production is planned to come from nonoperated properties, down from over 35% in 2013. The vast majority of our operations and expected results will come from our low-risk Eagle Ford development activities.”

No material production is expected from the TMS this year, but Sanchez said he is “excited about the potential” of the play, which the company entered last summer (see Shale Daily, Aug. 9, 2013).

“We plan to initiate our drilling activities in the TMS in 2014 and have allocated approximately 10% of our operating capital to this rapidly emerging play. Our drilling will be a combination of operated and nonoperated wells, with our first operated well expected to spud in the first half of 2014,” he said. “We expect the substantial increase in TMS industry activity during 2014 to positively influence the well cost structure and overall knowledge of the play.”