Houston-based independent Sanchez Energy Corp. grew its production by more than 350% from a year ago as of the end of the third quarter, said the company, which has a 95,000 net acre position targeting the liquids-rich Eagle Ford Shale, Pearsall Shale, Austin Chalk and Buda Limestone. 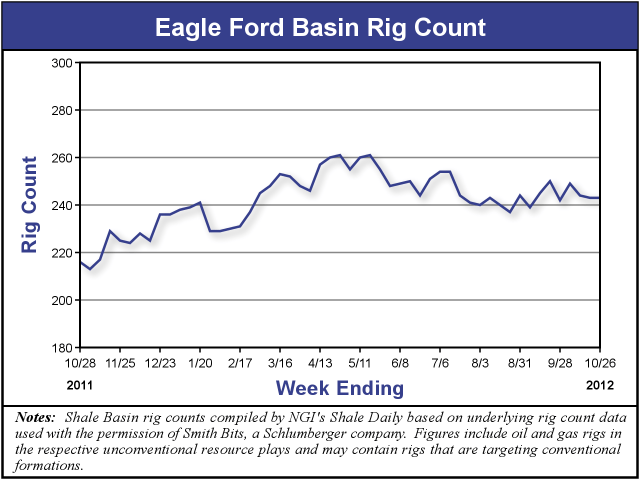 “Production is expected to significantly increase during the fourth quarter as the company executes the remainder of its 2012 drilling plan and adds seven wells already drilled and currently waiting on completion,” Sanchez said. The company reaffirmed its 2012 production exit rate guidance range of 4,000-5,000 boe/d.

“We are executing our accelerated drilling program with two rigs currently drilling in each of our three major project areas after closing our $150 million convertible preferred equity offering,” said CEO Tony Sanchez. “As we continue more development-type drilling in each project area and bring online wells currently waiting on completion, we expect to rapidly grow our production from its base of 1,700 boe/d at the end of September. We are also testing tighter spacing in each of our areas, which may allow us to materially increase our 800-1,200 net identified potential drilling locations and our 250-380 million boe net resource potential based on 80-120 acre well spacing.”

In the Palmetto area, Sanchez has nine producing wells, one well in initial flowback, two wells undergoing completion, two wells waiting on completion, and two wells currently drilling. Plans are to continuously employ two drilling rigs, which are expected to spud 16 gross (eight net) wells in 2012 in the area.

The company has two producing wells, one well undergoing completion, one well waiting on completion and two wells currently drilling in its Marquis area. It expects to spud nine gross and net wells in 2012, including eight wells planned in the Prost area of Marquis. A rig will drill continuously in the Prost area while 3-D seismic of the rest of Marquis is acquired and interpreted during the first half of 2013, Sanchez said..

The company has nine producing wells and two wells currently drilling in its Maverick area and said it expects to spud up to 10 gross and net wells in 2012.

Eagle Ford Shale liquids continue to draw producer interest. According to NGI’s Shale Daily Unconventional Rig Count, there were 243 rigs running in the Eagle Ford last Friday. This represents a 13% increase from one year ago.