Benefitting from a recent acquisition and production growth from legacy assets, Sanchez Energy Corp. is currently producing at a record level of about 76,000 boe/d, the company said Wednesday. 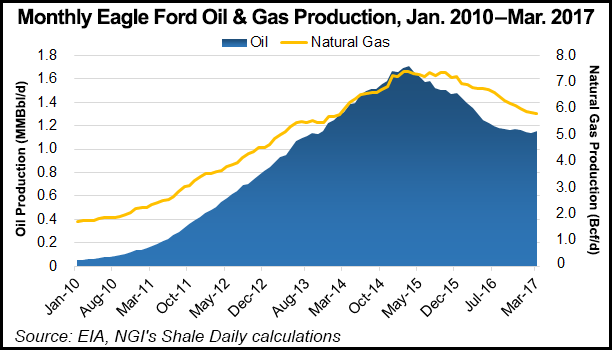 Sanchez and Blackstone Energy Partners closed on the acquisition of working interests in 318,000 gross operated acres in the western Eagle Ford Shale on March 1 (the Comanche transaction), resulting in the addition of 67,000 boe/d of production, 300 million boe of proved reserves, and 155,000 net acres.

Completion operations on the inventory of drilled but uncompleted (DUC) wells acquired in the Comanche transaction began in early March, with the first nine DUC wells brought online in mid-April, the company said in its first quarter operations update. Drilling at Comanche currently consists of three rigs with two additional rigs planned in May.

Sanchez brought 14 wells online in the south-central region of Catarina in the first quarter using a new generation of fracture (frack) design that is 60% larger than the previous design used in the region.

“During the first quarter of 2017, we took a major step toward positioning Sanchez Energy among the leading producers in the Eagle Ford Shale,” said CEO Tony Sanchez. “After months of careful planning and preparation, drilling and completion operations on the newly acquired acreage began quickly and efficiently…

“We are currently running three drilling rigs, two frack spreads, and three workover rigs at Comanche, with plans to add additional rigs and completion equipment as the year progresses. Production from the initial DUC wells that were recently completed has been strong and so far has exceeded expectations.”

Estimated production for the first quarter averaged 51,800 boe/d, which was in line with expectations and puts Sanchez on target to hit full-year guidance of 78,000-82,000 boe/d, the company said. First quarter production was 38% natural gas, 33% oil and 29% natural gas liquids.

The 14 wells brought online in the south-central region of Catarina were completed with proppant loading of 3,000 pounds/foot, which is 60% more proppant and fluids than the company’s standard design, Sanchez said.

“The move to a larger completion design in the south-central region of Catarina stems from tests conducted in this area over the last year,” the CEO said. “Based on the results of this testing, we anticipate the new design will result in a flatter decline profile with payout in as little as six months and performance that is roughly 25% better than our standard completion work after six months of operation.”

Excluding higher costs for larger completions, Sanchez is realizing an average of 10-15% increase in service costs, the company said, adding that this was expected.

“That being said, we have now completed contracting of major services to support drilling plans for the next two years, with fixed price arrangements in place for sand, pressure pumping and drilling rigs, among other services,” the CEO said. “We believe these arrangements will allow us to maintain our cost structure and de-bundled approach to procurement despite the current pressure on the services market.”