After reporting record production and revenue in 2014, with oil production doubled and natural gas output up nearly five-fold, Houston-based Sanchez Energy Corp. said it plans to focus on drilling in a project area in the Eagle Ford Shale in 2015. 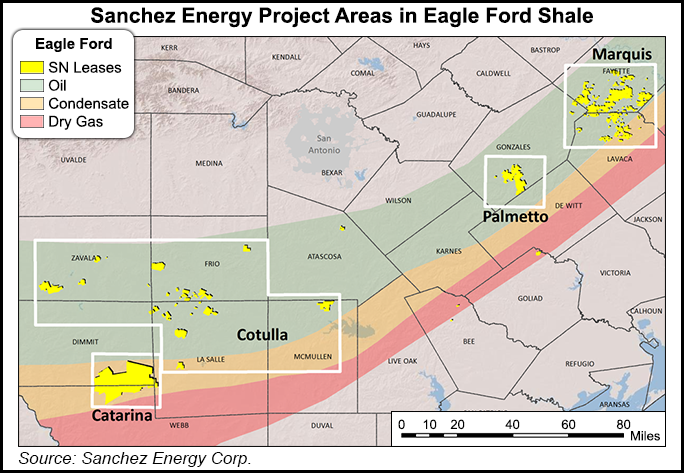 During a conference call Tuesday, company executives reaffirmed a revised plan to spend $600-650 million on capital expenditures (capex) in 2015, as well as production guidance of 40,000-44,000 boe/d for 1Q2015 and the full-year 2015. Sanchez had revised its guidance in January citing depressed commodity prices (see Shale Daily, Jan. 8).

Most of the capex budget (65%) would be devoted to Catarina, one of four project areas in the Eagle Ford, while another 13% would go toward nonoperated assets in a second project area, Palmetto. The company said 9% would be spent on legacy assets and 6% would go toward the Tuscaloosa Marine Shale (TMS).

CEO Tony Sanchez said rates of return were exceeding expectations in Catarina and the upper Eagle Ford, which trends to north of Houston, with results tracking at a type curve of 600,000-700,000 boe.

“We now believe that there is a stacked pay profile present in the west, which is causing us to reevaluate our original plans to focus exclusively on the lower Eagle Ford,” Sanchez said. “We are pursuing the co-development of what we believe to be two distinct horizons that are delivering high rates of return on the western part [of the project area].”

The company said it currently has 513 gross producing wells and has 37 gross wells in various stages of completion. Twenty-one wells awaiting completion are in Catarina, while nine are in the Marquis project area, six are in the Cotulla project area, and one is in the TMS. Sanchez expects to bring 10-15 wells online in 1Q2015, with plans to average four gross (3.5 net) rigs over the course of 2015.

COO Chris Heinson said the company should be able to grow production in 2016 over its 2015 guidance levels, with a capex budget of $400-450 million. “We currently plan to maintain our two longer term contracted rigs in our portfolio with remainder on short term contracts and extension,” he said.

Heinson added that for now, Sanchez would focus on the western side of Catarina.

“That’s where we do envision spending most of the remaining capital that we have allocated for 2015,” Heinson said. “Right now we had a total of eight wells drilled out in this sort of ‘eastern appraisal’ and the ‘south central appraisal’ [areas]. [But] right now, until we see something that really drives us to continue to increase [the] allocation [for] those areas, the balance is all going to be towards the west. We are seeing the strong upper and lower Eagle Ford results all in the west, and I think that’s where we are going to focus.”