One month after announcing it would expand its position in the Eagle Ford Shale, Sanchez Energy Corp. on Wednesday laid out plans for 2017 to boost its capital expenditures (capex) budget and tackle the acquisition’s complement of drilled but uncompleted (DUC) wells. 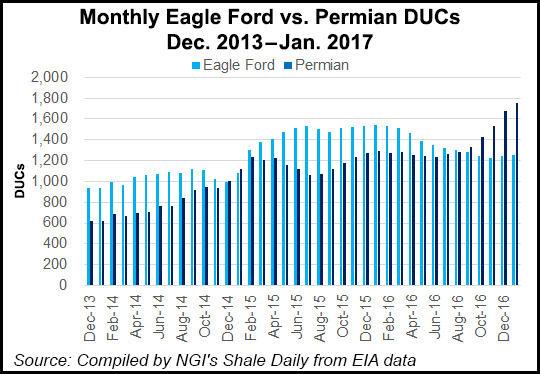 Last month, Anadarko Petroleum Corp. announced it wouldsell its Eagle Ford Shaleportfolio in South Texas to a 50-50 joint venture between Sanchez and Blackstone Group LP for $2.3 billion. The transaction, which Sanchez has renamed as the Comanche assets, is scheduled to close by the end of March..

“The 132 [gross] DUC wells that will be acquired with the Comanche assets provide an opportunity to quickly ramp production and dramatically increase cash flow in the near term,” CEO Tony Sanchez said. “With rates of return expected to exceed 100%, we see this as an excellent use of capital in 2017 that we believe will lead to a significantly stronger balance sheet over a relatively short period of time.”

During a conference call to discuss 4Q2016, COO Chris Heinson said the company is “focused on a quick and efficient transition and integration of the assets. We have made significant progress on securing services and staff needed to work with the new assets. We’re also in the process of constructing an appraisal program focused on accelerating multi-bench development across the asset, and we intend to test a variety of completion designs.”

Sanchez estimated it could spend an additional $500 million on capex in 2018. The largest portion (37%) of its capex budget for 2017 would be devoted to the Catarina assets in the Eagle Ford, followed by a combined 31% portion for its Comanche assets in the play — 21% for new wells, and 10% for DUC wells there. Sanchez’s Maverick (23%) and Palmetto (2%) assets will also receive some capital.

Heinson said Sanchez is currently running four rigs — two in its Maverick assets in the Eagle Ford and two in its Catarina assets. One of the two rigs deployed in Catarina is being dropped for a period of time in the middle of the year, but it would be raised again in 3Q2017, he said.

The company plans to move four rigs into its Comanche assets by mid-April, and add a fifth rig in May as part of its strategy to begin completing its inventory of DUC wells in March.

“We’re going to be moving in frack [fracture] spreads,” Heinson said during the call’s question-and-answer session with analysts. “To be ready to go in March, but certainly by 2Q2017, we’re going to be ramping up our pace. With the completion spreads coming on that we have sourced, we expect they will basically have all 132 DUCs online by early 2018, and most of those would be on by 1Q2018.

“That pace is going to continue through mid-year. And even though we’re adding four additional rigs onto Comanche, we don’t plan on dropping any activity on [Catarina and Maverick] until the back half of 2017.”

According to a slide presentation, Sanchez’s position in the Eagle Ford totaled 335,000 net acres at the end of 2016, pro forma to the pending acquisition. The company also held 50,000 gross acres in the Tuscaloosa Marine Shale.