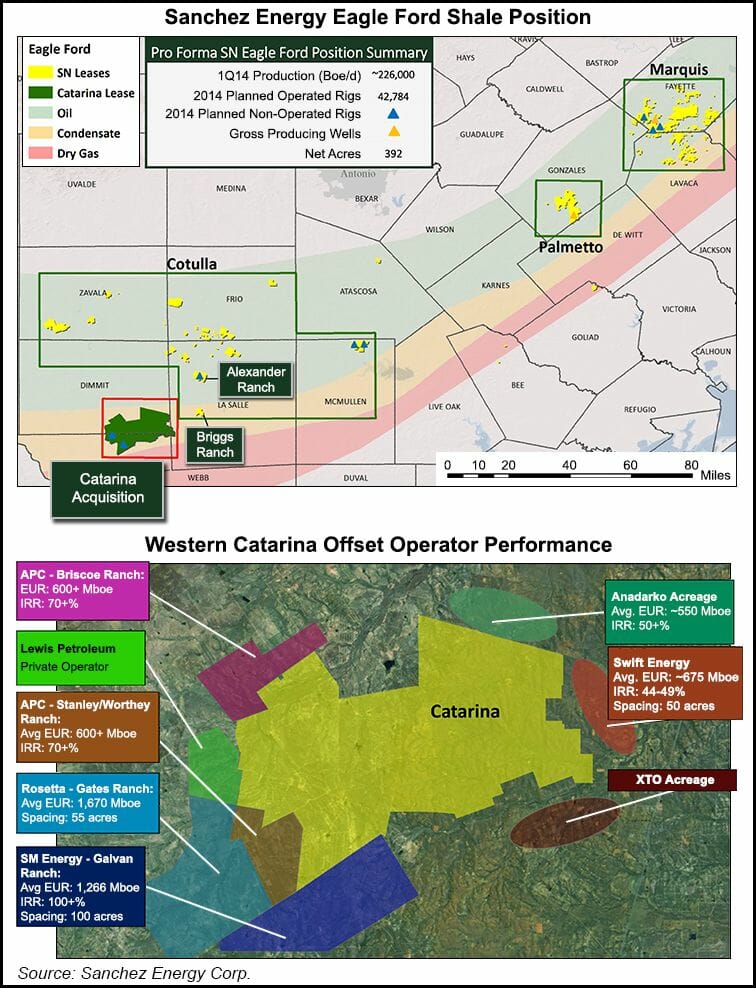 The deal more than doubles proved reserves and current production and nearly doubles the company’s Eagle Ford position to 226,000 acres with up to 3,000 potential drilling locations and pro forma production of 42,800 boe/d.

The assets, consisting of 60 million boe of proved reserves and 24,000 boe/d of average first quarter 2014 production (60% liquids), are in Dimmit, LaSalle, and Webb counties, TX. Sanchez is acquiring a 100% working interest and 75% net revenue interest. The effective date of the transaction is Jan. 1, 2014. The operated assets are to be called “Catarina.”

“This transaction is a catalyst in our strategy to grow through both the drillbit and prudent asset acquisitions,” CEO Sanchez said. “As important, this transaction plays to our demonstrated strengths and track record of making opportunistic acquisitions and using our proven focus and technical capabilities to improve operating results. The addition of this asset includes at least 200 identified drilling locations and up to 800 additional potential locations that can be added through our planned appraisal work on the rest of the asset and will take us to a total of almost 3,000 potential drilling locations.”

Sanchez shares rallied early in the day Thursday, gaining about 15% and hitting a new 52-week intraday high of $34.50. However, by the end of regular trading gains had been pared to about 9% and shares closed at $31.42. Trading volume was more than twice the norm.

BMO Capital Markets analyst Dan McSpirit and his colleagues wrote of the deal, “We like it.” They added that many of the producing wells on the acreage had targeted the upper Eagle Ford rather than the lower. “We’ve seen other small caps acquire on the cheap at the asset level, only to fail at exploiting the inventory and growing production. We don’t see the same risk with [Sanchez], recognizing the recent track record of meeting/exceeding expectations [see Shale Daily,Jan. 16].”

The BMO analysts added that Sanchez will be able to reduce drilling and completion costs in the play and alluded to the company’s position in the emerging Tuscaloosa Marine Shale (TMS). “You know what’s coming,” they wrote. Sanchez has been a non-operating participant in a few TMS wells and spud its first operated well in the play on Wednesday (see Shale Daily,April 29).

“…[W]e think it’s worth noting that there is reason to believe this deal may provide poor insight into the region’s value,” Wells Fargo said. “For more than a year…we have consistently heard operators state that Shell’s acreage was not on their respective radars. While commentary was admittedly vague, body language suggested to us that the lack of interest was due to unique qualities of the acreage rather than a repudiation of the surrounding area.”

Sanchez said an estimated 200 derisked ready-to-drill locations on the acreage being acquired will provide at least four years of drilling inventory at a 50-well-per-year pace.

“We expect that this drilling activity will generate well-level rates of return in excess of 35-50%. The acquisition will also increase our total proved reserves by 60 million boe and proved developed reserves by 36 million boe, the value of which offsets a substantial portion of the purchase price,” CEO Sanchez said. CFO Michael Long told analysts during a conference call to discuss the deal that the effective purchase price would likely be $550 million to $600 million.

Sanchez said initial internal estimates puts the resource potential of the acquisition at up to 500 million boe. “The addition of this acreage will immediately enhance both our asset base and our financial strength,” the CEO said.

There are 22 wells that have been drilled to total depth and cased but not yet completed and 27 wells that will have been drilled with surface casing only at the expected closing date of the transaction. The asset comes with midstream and gathering infrastructure in place, including four regional processing facilities for separation and stabilization, a field gathering system for all produced fluids that contains more than 180 miles of pipeline, and a water disposal well.

No wells have been completed since late in the fourth quarter of 2013, Sanchez said, adding that its first priority will be to commence completion operations on the 22 drilled and cased but not yet completed wells, in conjunction with the commencement of the operated drilling program.

During the conference call, executives said they were “pretty confident” about the lower Eagle Ford in both the west and east areas. They said the belief by the company is that many of the wells drilled by Shell landed in the upper Eagle Ford — thought by some to be a separate reservoir — and have shown encouraging results. Meanwhile, the lower Eagle Ford — the traditional target in the play — was left largely undeveloped for Sanchez to have its go at it, executives said. “We’re going to go after that immediately,” said COO Christopher Heinson.

It was almost a year ago that Sanchez revised its spending and operations guidance for 2013 following the closing of the acquisition of South Texas assets, known as Cotulla, from Hess Corp. (see Shale Daily, June 5, 2013).

“We believe [the year-ago deal] is a great analogue for the current acquisition,” said Heinson. “That acquisition took place from an operator that was struggling to compete for capital due to the high costs.” He said through drilling efficiencies Sanchez was able to cut capital spending well beyond earlier expectations to below $6 million per well.

“Our latest wells from this asset have come in closer to $5.5 million per well, and we hope to see similar benefits moving toward Catarina.”

In conjunction with the Shell deal, Sanchez secured an increase in its debt commitments from its banks to $950 million. Closing is expected on June 30.

Last year, Shell launched a revamp of its onshore North American operations after taking about $2.7 billion in charges on its onshore business (see Daily GPI, Oct. 15, 2013). Last month, Shell executives said much of the North American onshore business was under review, with asset sales under way or planned in the Appalachian Basin and Eagle Ford (see Daily GPI, April 30).