Anadarko Petroleum Corp., which has narrowed its U.S. focus, agreed late Thursday to sell its Eagle Ford Shale portfolio in South Texas for $2.3 billion to a 50-50 joint venture of Sanchez Energy Corp. and Blackstone Group LP. 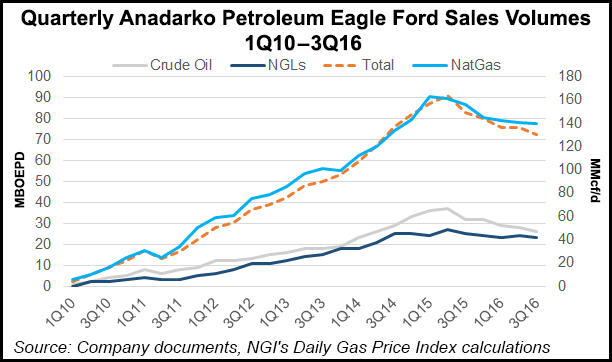 Sanchez (SN), whose primary focus in 2017 is the Eagle Ford, and its equity partner would gain 155,000 net acres (318,000 gross), primarily in Dimmit and Webb counties, which is contiguous to existing acreage.

The Eagle Ford sale was rumored to be in the works for months. Anadarko today directs most its capital to the Permian Basin’s Delaware play, the Denver-Julesburg (DJ) Basin and the deepwater Gulf of Mexico. It also sold its Marcellus Shale properties in December for $1.24 billion.

“The ongoing success of our portfolio-management activities provides us with the flexibility to further accelerate capital investments in our higher-return oil opportunities in the Delaware Basin, the DJ Basin and the deepwater Gulf of Mexico, which drive our ability to deliver a 12-14% five-year compounded annual oil growth rate,” saidCEO Al Walker.

Although it no longer will be in Anadarko’s portfolio, the Eagle Ford operations were built “into a coveted asset that will continue to be an important domestic source of energy for our nation,” Walker said.

“Our experience and success in investing in the oil and gas sector and the Eagle Ford Shale, and our strategic partnership with Sanchez, gives us confidence that this investment will be successful,” said Blackstone Senior Managing Director Angelo Acconcia, who oversees oil and gas investments. He said the partnership would “continue to grow through future acquisitions in this part of the basin.”

The joint venture deal, with each partner paying an equal share, is set to be completed by the end of March. It would support SN and facilitate future growth, said CEO Tony Sanchez during a conference call Friday morning.

The first priority once the transaction is complete is Anadarko’s drilled but uncompleted (DUC) inventory of wells, estimated at 132. The acreage is being renamed “Comanche, in reference to the historical heritage in this part of Texas,” the CEO said.

The “transformative acquisition more than doubles our drilling inventory,” and the resource potential has risen by more than 600 million boe, providing “a swift and clear path for strong growth within our projected cash flows.”

Important to the Houston-based independent is the location of the Anadarko portfolio, which is adjacent to SN’s Catarina assets. That alone would create “substantial operating synergies and other benefits arising from the scale and concentration of our Eagle Ford position,” the CEO said.

“Our initial focus will be completing the large DUC inventory. We planned to complete roughly 132 DUCs within approximately 12 months of closing. This will help drive near-term production growth and beneficial cash flow for SN and our partner Blackstone.

“Moreover, we plan to be very active on the drilling site, starting with four operated rigs on these assets specifically in the second quarter of this year.”

COO Chris Heison during the conference call said the first DUCs “will start coming online late in the second quarter and continue to add production into early 2018. We expect a similar ramp-up in drilling activity in the second quarter, with multi-bench development starting on Day One on all three Eagle Ford benches.

Like the Catarina assets, the multi-bench opportunities within the Anadarko property are encouraging, Sanchez said. “As the quality and thickness of the Upper and Middle Eagle Ford zones improve across the Comanche acreage, the extent of our inventory has dramatically increased.”

Anadarko has had limited drilling activity in South Texas over the last two years, while efficiencies across the oil patch have grown. That gives SN the opportunity to update completion designs and improve output, said the CEO.

“As we analyze current completion designs versus the size of the completion jobs previously pumped on this acreage, we see significant room for type curve improvement,” Sanchez said. “Previous wells drilled on the acreage were pumped with roughly 1,000 pounds/foot of proppant or less. When we begin completing these wells, we expect to be pumping between 1,700 and 2,500 pounds/foot of proppant.” That could double estimated ultimate reserves “in most of these areas.”

Once the transaction is completed, the Comanche asset’s free cash flow should allow SN to “further expand DUCs and drilling opportunities that will allow us to further expand all our existing…development program. As a result, we project that Sanchez Energy will be producing in excess of 100,000 boe/d, while operating within cash flows in the next 12 months to 18 months. Importantly, this transaction is expected to improve the company’s leverage ratio by over one turn in the same 12 months to 18 months.”

More details regarding the Eagle Ford expansion are expected during an SN investor day presentation on Jan. 23 in New York City.

“This aggressive monetization program has helped high-grade the portfolio and shore up the balance sheet, but it also means the company has built a meaningful cash position more than $6 billion pro forma for this sale,” he said. The question now “could now be what to do with the cash…” The focus likely is on transactions, “with the home run acquisition in our mind being the offsetting Permian checker board.”

Anadarko’s Eagle Ford production “has been in decline since mid-2015, with little capital expected in 2017, so an ownership change should add activity to the area, while cash in the door at Anadarko allows the company to redirect capital,” TPH analysts noted.

Anadarko’s sponsored master limited partnership Western Gas Partners LP (WES) would continue to own and operate the South Texas midstream assets and benefit from drilling commitments made by the buyers in conjunction with the transaction.

The revamp by SN across the acreage is expected to benefit WES.

After rallying sharply to start the week, natural gas futures were trading close to even early Thursday as the market continued to monitor the prospects of a return to hotter temperatures early next month.  Coming off a 66.1-cent rally in the previous session, the June Nymex contract was up 0.9 cents to $8.753/MMBtu at around…