The United States has an ad hoc national energy plan that is working well, driving the nation closer to energy independence, and a key reason for the success is that there is a lot more regulatory certainty, relative to other parts of the world, former U.S. Interior Secretary Ken Salazar told an energy forum in Denver on Wednesday. 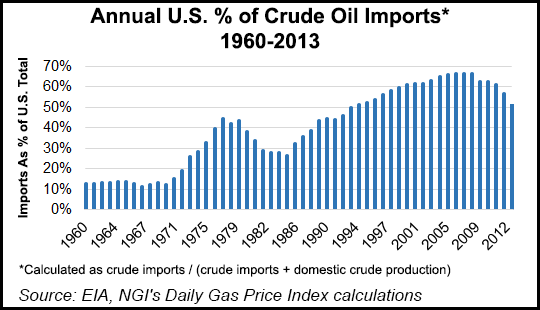 In contrast, Salazar thinks the United Kingdom and other parts of Western Europe have too much uncertainty and will never enjoy a shale oil/gas boom such as the United States now is experiencing.

“I would argue that we have a national energy policy that is working, and while it may not be perfect, we have taken the United States to a point where we are within sight of energy independence, Salazar said.

Looked at in the historical perspective of the past 30 to 40 years, Salazar told the gathering of western attorneys general that during most of that time “we were nowhere there” in terms of energy independence. He said work by Congress and the Bush administration in 2005-2007 provided the framework, and what the nation has today is a “composite” of that past work.

He counts as part of the policy framework the 2005 Energy Policy Act; the 2006 Gulf of Mexico Security Act; and the 2007 Energy Independence and Security Act. Rather than the nation’s oil imports continuing to climb to 70% as predicted a decade ago, the nation is under 40% and headed rapidly toward 25%, Salazar said.

Crude oil imports as a percentage of total supply (measured by crude imports plus domestic production) peaked at 66.5% in 2006 but shrank to 50.9% in 2013, thanks in large part to unconventional production in areas such as the Bakken and Eagle Ford shales, according to NGI’s calculations from Energy Information Administration data. That ratio came in at 48.9% in January 2014 (see chart).

“Fast forward to 2014, and the U.S. is in a good place, and it’s getting better,” Salazar said. “What got us there? The great technology advances in horizontal drilling and hydraulic fracturing are what have enabled this. Without these two we wouldn’t be able to speak about the kinds of results that we have today.”

Asserting that fracking has been around a long time and can be done safely, Salazar said the industry and elected leaders need to help restore citizens’ confidence in hydraulic fracturing through disclosing what the fracking fluids are, ensuring wellbore integrity, and eliminating any adverse water-related issues.

Salazar did not offer any specifics on future regulations and how the states and federal government eventually will resolve some of the issues, but he did say whatever is done should not “nullify fracking nationally because that would be going in the wrong direction.”