The aging mainstay of Atlantic natural gas production, the Sable Offshore Energy Project (SOEP), is signaling its days as a supplier for New England and Maritime Canada are numbered by discarding its shipping services. 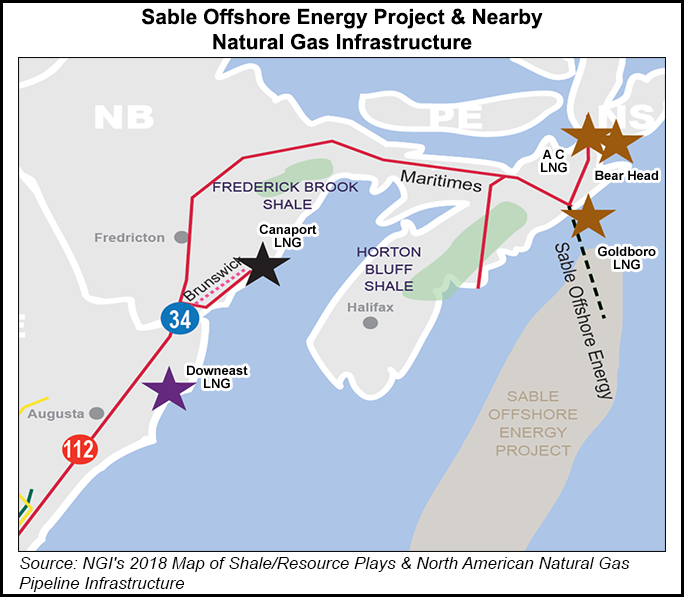 Disclosures to the National Energy Board (NEB) indicate SOEP’s senior partners — units of ExxonMobil Corp. (50.8% owner) and Royal Dutch Shell plc (31.3%) — will drop delivery rights on Maritimes & Northeast Pipeline (M&NE) when their contracts expire in late 2019. SOEP has been in decline for years.

ExxonMobil and Shell hold 370 MMcf/d or 85% of the 434 MMcf/d of M&NE’s contracted capacity. The rest largely belongs to distribution utilities and industrial gas consumers in New Brunswick and Nova Scotia.

Shell has given formal non-renewal notice, the pipeline said in written evidence provided to the board in support of an application for approval of a three-year toll settlement with gas shippers for 2017-19.

“M&NE does not believe ExxonMobil will renew its existing contracts, but may have need for some level of continued capacity should its Sable fields not be fully decommissioned by the end of the settlement period,” it said.

The pipeline’s outlook appears well informed. ExxonMobil owns 9.5% of the M&NE partnership, which is led by Enbridge Inc. with 77.5%. The remaining 12.9% is held by Halifax-based power and gas conglomerate Emera.

Work on removing SOEP from its Atlantic site 200 kilometers (120 miles) offshore of Nova Scotia is expected to begin soon. The consortium has disclosed awarding four contracts for dismantling its 200 square-kilometer (80 square-mile) network of 21 wells, seven production platforms and 340 kilometers (200 miles) of subsea pipelines. Bids are being collected for more decommissioning contracts.

M&NE’s disclosures to the NEB indicate the Canadian Maritimes already lost the formerly treasured status as a net gas exporter. As of this year annual average traffic is forecast only to equal the Canadian region’s consumption of 176 MMcf/d.

M&NE was built capable of reversing its flows, and Canada’s East Coast is poised to turn into a net gas importer. The emerging pattern shows in the pipeline toll case.

As the Canadian toll case proceeds, in the United States Enbridge is seeking approval from the Federal Energy Regulatory Commission for Atlantic Bridge that would export Marcellus and Utica shale gas to New Brunswick and Nova Scotia.

The emerging gas flow reversal sinks a Canadian vision of gas-fuelled regional prosperity that described M&NE as a “seed project” for long-range growth when shipments began in 1999. From a peak topping 600 MMcf/d combined production by SOEP and nearby Deep Panuke has shrunk by 70% to 184 MMcf/d and continues to decline steeply.

Earth sciences agencies estimate 67 Tcf of shale gas await development in New Brunswick and that Nova Scotia has smaller but potentially commercial deposits. But after public inquiries demonstrated popular disdain for the industry both provinces enacted moratoriums against the methods needed to tap the deposits, horizontal drilling and hydraulic fracturing.