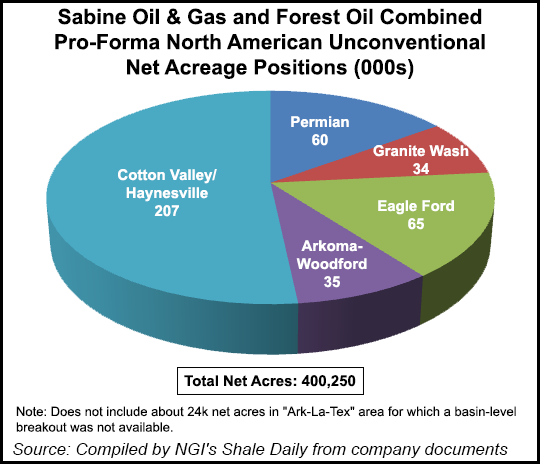 Sabine CEO David Sambrooks will lead the combined company, to be called Sabine Oil & Gas Corp. and listed on the New York Stock Exchange with ticker “SABO.” The combined company will be a leading player in the multiple plays of East Texas, executives said during a conference call Tuesday.

“Since Sabine began in 2007, we have focused on building a significant asset base in East Texas and with this combination we have created a leading industry position in this highly economic, multi-play basin,” Sambrooks said. “Sabine has had a successful track record of about 30% compound annual growth rate production and cash flow growth since its inception and industry-leading well results in all of our operating areas.”

On Tuesday Sambrooks told analysts the merger partners “…have virtually a hand-in-glove set of assets” and that the positions in East Texas and the Eagle Ford are highly complementary.

“The combined company will be an industry leader in East Texas in terms of acreage position and growth opportunity,” he said. “Furthermore, East Texas is a true multi-play basin and the combined asset base will have excellent assets, not just to the Cotton Valley and Haynesville but potential opportunities in the Bossier, Travis, Deep Pettit and other formations.

“What is really becoming exciting in East Texas is how the combination of improving well results through advanced drilling and completion design is intersecting with improving gas prices…The Cotton Valley economics have actually been turned on now, and it is also very interesting to see how the Haynesville is beginning to move into the value window…

“And a fair argument can be made that East Texas is starting to look like it’s on the right side of the pipeline system,” Sambrooks said.

“The conclusion is that this is an exciting time in East Texas. We’ve unlocked the completion in the Cotton Valley and the Haynesville, and with current gas prices we’re achieving excellent well economics with significant upside to further increased pricing.”

Closing, which is expected during the second half of the year, is subject to Forest shareholder approval as well as regulatory approvals. Sabine unit holders are to own 73.5% of the new company and Forest shareholders will own 26.5%.

“We believe that this transaction creates a great opportunity for Forest shareholders to participate in the upside potential gained from a larger and better capitalized entity with a more robust suite of opportunities and a broader portfolio upon which to execute its capital plan and strategy,” said Forest CEO Patrick McDonald. “Forest’s asset portfolio is an excellent complement with Sabine’s asset portfolio, and we have confidence that Sabine’s management team is equipped to deliver exceptional shareholder value through the enhanced opportunities that are embedded in Forest’s assets.”

The enhanced financial strength and flexibility of the combined company will allow it to de-lever its balance sheet through optimized capital programs and potential asset sales, executives said. The new company is expected to have sufficient liquidity to fund its drilling program through 2015 without needing to access the equity markets. “The new entity expects to quickly but prudently evaluate and execute on accretive asset divestments to accelerate balance sheet de-levering,” the companies said.

Sambrooks will serve as chairman and president as well as CEO. Shane Bayless will be CFO, and Todd Levesque will be COO. The new company’s board will be comprised of the existing six Sabine board members and two of the current Forest board members.