European natural gas prices have continued to decline since the Nord Stream (NS) pipeline systems connected to previously vital Russian gas were damaged, but the International Energy Agency (IEA) warned LNG markets could be drastically impacted into next year. 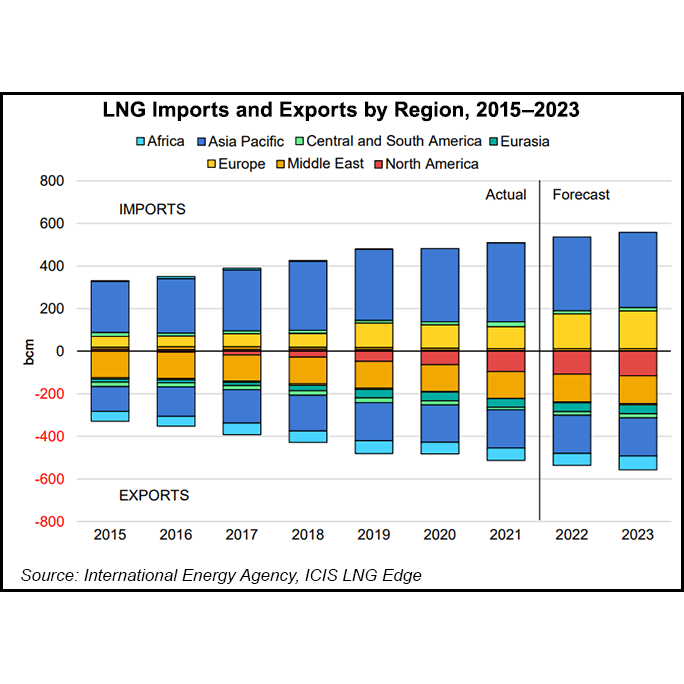 IEA researchers forecast Europe’s LNG imports would increase in December by 60 Bcm compared with last year’s volumes. That demand is more than double worldwide LNG export capacity expansions, which could lead to higher prices as Europe battles with Asia over spot cargoes.

“The outlook for gas markets remains clouded, not least because of Russia’s reckless and unpredictable conduct, which has shattered its reputation as a reliable supplier,” IEA’s Keisuke Sadamori, director of energy markets and security, said. “But all the signs point to markets remaining very tight well into 2023.”

Before Russia’s invasion of Ukraine in February, Europe had been increasing its intake of LNG cargoes to make up for declining pipeline volumes. By August, European imports had increased 65% year/year while Asian demand had dropped by around 7%, according to the IEA.

In a recent note from BofA Global Research, analysts wrote that increased LNG demand and limited supply could keep European natural gas prices at or above $60/MMBtu “over the next four to six months under normal weather.” A harsher winter could spike prices further and threatened a storage shortfall on the continent, analysts added.

Meanwhile, on Monday EnergiDanmark analysts wrote that a milder short-term weather outlook and continued high storage levels were fueling an extended price drop. The market “remained nervous” that the Dutch Title Transfer Facility (TTF) benchmark was “relatively stable over the last few weeks compared to the enormous fluctuations during summer, while day-ahead prices have also fallen to the lowest level in a couple of months.”

The TTF closed at around $49 Monday, down from $54.427 on Friday. It had been on a downward slide since last Wednesday (Sept. 28), after a brief spike in the wake of the NS news.

In its report, the IEA said EU gas storage could dip below 20% by February without significant conservation efforts. The model also assumed a high level of LNG supply. If there were to be a disruption of imports, IEA analysts found storage could dip close to only 5% full.

“Therefore, gas saving measures will be crucial to minimize storage withdrawals and keep inventories at adequate levels until the end of the heating season,” EIA researchers wrote.

Regardless of the winter’s severity, the IEA expects LNG market tightness and economic pressures to impact global gas demand beyond 2023. Researchers assume global gas consumption would continue declining by 0.8% year/year.

The IEA has been tracking the tighter global gas markets since last year, when geopolitical tensions began spiking natural gas prices. In Europe, gas consumption is expected to reach a record 10% reduction compared with last year.

In other news, Russia’s Gazprom PJSC reported Monday that both strings of the NS1 pipeline and one string of NS2, which hasn’t operated commercially, were stabilized. The state-controlled firm said it was working to empty string B of NS2 to conduct a full technical review. It also raised the possibility of making the system available for future gas deliveries.

“If a decision is made to start supplies via string B of Nord Stream 2, natural gas will be fed into the pipeline after the system is checked for integrity and the possibility of supplies is confirmed by the supervisory authorities,” Gazprom stated.