Private sector oil production in Mexico hit a record high of 86,056 b/d in January, up from the previous high of 74,809 b/d set in December and 53,064 b/d in January 2021, according to upstream regulator Comisión Nacional de Hidrocarburos (CNH). 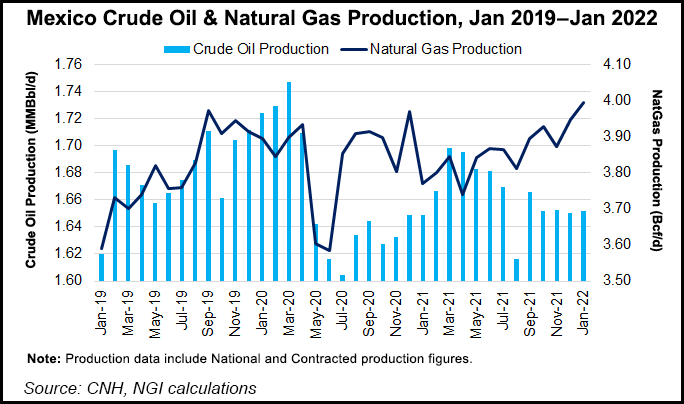 The 62% year/year increase was driven largely by Fieldwood Energy LLC, which until last month was the operator of the Ichalkil and Pokoch shallow water fields with a 50% working interest. Fieldwood reported oil output of 18,071 b/d and natural gas production of 29.6 MMcf/d in January from offshore Area 4, which contains the two fields.

In late February, Russia’s PJSC Lukoil completed its acquisition of Fieldwood’s operating interest in Area 4 in a transaction valued at $435 million.

The fields are estimated to contain 564 million boe of recoverable hydrocarbon reserves, of which more than 80% is oil, according to Lukoil. Production at the fields began in the fourth quarter of 2021.

Lukoil said production from Ichalkil and Pokoch is expected to peak at more than 115,000 boe/d.

The remaining non-operated stake in Area 4 is held by PetroBal, the oil and gas subsidiary of Mexican conglomerate Grupo Bal.

President Andrés Manuel López Obrador said Tuesday that Mexico – unlike the United States, Canada and the European Union – would not impose economic sanctions on Russia in response to the latter’s invasion of Ukraine. But the country did vote to pass the resolution at the United Nations condemning Russia’s invasion.

Mexico’s oil production as a whole, meanwhile, was flat year/year at 1.65 million b/d in January.

Production was led by the Maloob, Zaap, Xanab, Ayatsil and Balam fields, all of which are operated by Pemex.

In other upstream news, Italy’s Eni SpA announced in late February that the Miamte floating production, storage and offloading (FPSO) vessel had begun production at the Miztón shallow water field off the coast of Mexico’s Tabasco state. Miztón is part of contractual Area 1 awarded to an Eni-led consortium in Mexico’s Round 1.2 bidding process in 2015.

“Upon its arrival in Mexico in January 2022, Miamte FPSO has been connected to its mooring system and went through pre-commissioning and integrated commissioning activities,” Eni said.

Following the first hydrocarbon introduction into the platform, and the startup of two more platforms at the Amoca and Tecoalli fields, Area 1 will ramp toward full production, with the development stage expected to be complete by 2024.

“Eni’s achievements in Mexico are the results of the company’s commitment to comply with project schedule and contractual obligations, as well as on the continued support from the Mexican government in providing the necessary permitting approval,” the company said.

“Mexico is a key country in Eni’s organic growth strategy,” management said. “The company has been present in the country since 2006 and has established in 2015 its subsidiary Eni Mexico S. de R.L. de C.V.

“Eni currently holds interests in eight exploration and production blocks (six as an operator), all located in the Sureste Basin in the Gulf of Mexico.”

Pemex CFO Alberto Velázquez, meanwhile, said Monday that the state-owned producer will increase capital expenditures this year to above 200 million pesos ($9.7 billion) from 161 billion pesos in 2021.