Russia’s energy minister on Wednesday reportedly said the United States does not appear to be prepared to allow for global market competition when it comes to natural gas exports. 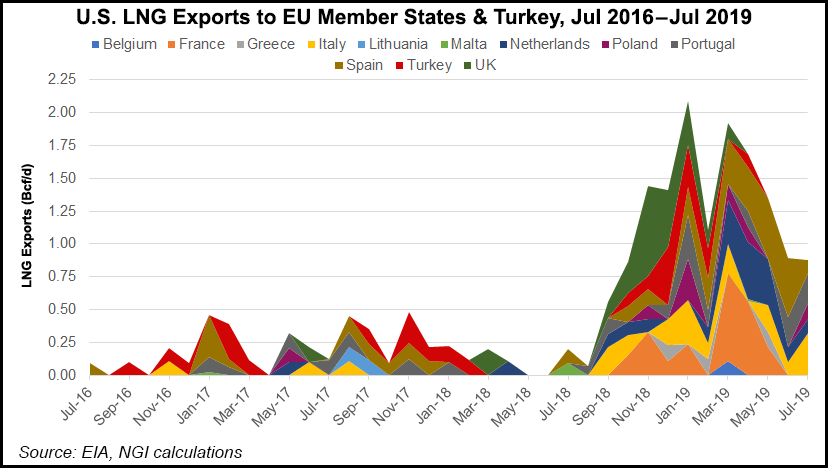 During the third annual Russian Energy Week conference in Moscow, Energy Minister Alexander Novak reportedly said the United States was using liquefied natural gas (LNG) exports “as a weapon, and they do it on the other side of the Atlantic.”

He called out a Trump administration claim that U.S. gas exports to the European Union (EU) are “freedom gas,” and said instead that they’re “purely protectionism.”

When Freeport LNG’s fourth train was given approval to proceed by U.S. officials in May, U.S. Department of Energy (DOE) Under Secretary Mark W. Menezes said increasing export capacity from the project was “critical to spreading freedom gas throughout the world by giving America’s allies a diverse and affordable source of clean energy. Further, more exports of U.S. LNG to the world means more U.S. jobs and more domestic economic growth and cleaner air here at home and around the globe.”

DOE’s Steven Winberg, assistant secretary of fossil energy, who signed the Freeport export order, said the announcement underscored the Trump administration’s “commitment” to an America-first agenda, allowing for “molecules of U.S. freedom to be exported to the world.”

Menezes and Winberg were building on previous comments by DOE Secretary Rick Perry, who told reporters in May that “the United States is again delivering a form of freedom to the European continent” after liberating Europe from Nazi occupation. “And rather than in the form of young American soldiers, it’s in the form of liquefied natural gas.”

Russia remains the largest gas supplier to Europe, but U.S. LNG is on a collision course of sorts with Russia-led Nord Stream 2 and its Turkish Stream (TurkStream) gas pipelines underway to move more supply to Western Europe. TurkStream is a project of Russia’s Gazprom, while Nord Stream is a joint venture between Gazprom and OMV AG, Engie, Uniper SE and Wintershall Holding GmbH and Royal Dutch Shell plc. In January, the U.S. ambassador to Germany reportedly warned that companies working on Nord Stream could be subject to sanctions.

Last March, Germany authorized Nord Stream, which is to have 1.94 Tcf of transport capacity and run 759 miles under the Baltic Sea. The pipeline, doubling current capacity, could begin service by early 2020 connecting to Greifswald in northeastern Germany.

At the Moscow conference Wednesday Russian President Vladimir Putin reportedly urged Denmark to allow Nord Stream to pass through its territory as it nears completion.

“Denmark is being subjected to strong pressure,” Putin said, according to Russian news agency Tass. “Whether it will be able to demonstrate independence and sovereignty depends on itself. If it fails there are other routes. That will be more expensive and slightly delay the project, though I still think it will be implemented.”

Gazprom said Tuesday the pipeline is 83% complete, with more than 1,240 miles already laid. Half of the $10.6 billion project is financed by Gazprom, with the other half financed by European-based Wintershall Uniper, Royal Dutch Shell plc, Engie and OMV.

Earlier this year, the German government approved a plan making it easier for LNG project companies to invest in LNG import terminals. Under the legislation, LNG companies pay a 10% share of the connection costs for LNG, giving them more incentive to invest in projects.

On Monday, four groups of companies were shortlisted to build Germany’s first LNG import terminal at BrunsbÃ¼ttel at the mouth of the Elbe River near Hamburg. The firms have until December to submit tenders with a final selection scheduled for April. The $570 million German LNG terminal would distribute gas to the country’s grid and in smaller quantities by ship, truck and railroad cars.