The global natural gas market was once again flung into chaos Wednesday after Russian President Vladimir Putin reportedly said he would only accept payments in rubles for supplies of the fuel from “unfriendly countries” such as those in the European Union (EU). 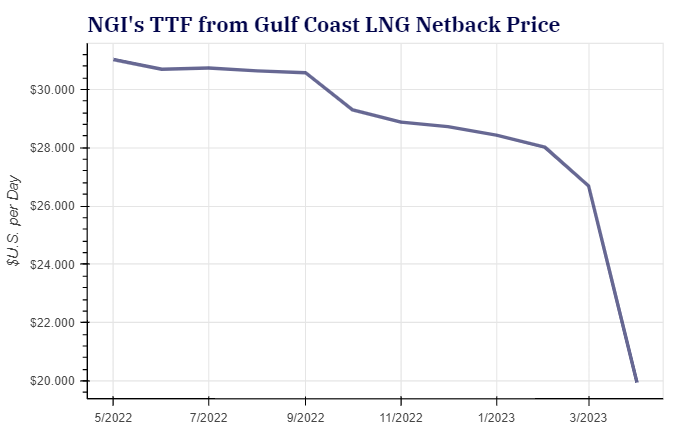 The European benchmark Title Transfer Facility surged after Putin’s remarks at a government meeting were reported by Russian state news media. The prompt contract jumped by nearly $6 to finish at close to $40/MMBtu after falling over much of the last week. The market in recent days had seemed less concerned about disruptions of Russian gas flowing to Europe amid war in Ukraine.

Russia is Europe’s largest natural gas supplier, accounting for more than a third of its imports. Russian flows to the region were again stable Wednesday at more than 200 million cubic meters. Nearly all gas purchase contracts into Europe are denominated in euros and dollars, Rystad Energy analyst Vinicius Romano said, adding that Putin’s remarks appear to be an attempt to prop up the faltering ruble.

He added that gas supply agreements are “generally considered sacrosanct” and noted that insisting on ruble payments could open the door for renegotiating contract terms, which could speed Europe’s transition away from Russia.

“What is clear, however, is that this has added another element of uncertainty to the already chaotic European gas market by complicating gas purchases that many countries have been reluctant to cut,” Romano said.

Putin jolted the market just ahead of President Joe Biden’s arrival in Brussels, where he is expected to unveil additional sanctions against the country and meet with EU leaders. Brent crude shot above $122/bbl Wednesday, mainly on the possibility that Western leaders could enact a European embargo on Russian oil.

Complicating things further is the likelihood of prolonged coal-fired power outages in Japan following an earthquake there last week that could boost demand for liquefied natural gas.

Meanwhile, the European Commission (EC) adopted a draft regulation and modified plans it rolled out earlier this month to cut the continent’s reliance on Russian fossil fuels before 2030. The latest options will be discussed at the summit Biden is attending Thursday.

The bloc’s executive arm is now proposing that natural gas storage inventories be filled to 80% of capacity by Nov. 1, rather than the 90% target by Oct. 1 it outlined earlier this month. The Commission also said joint gas purchases among EU member countries would help pool demand, solidify buying relationships and secure better prices.

The EC also put forward the idea of mandatory certifications of all storage system operators to “avoid potential risks resulting from outside influence over critical storage infrastructure” like assets in the region controlled by Russia’s Gazprom PJSC. Other short-term options to help protect the European economy from the energy impacts of the war are also set to be discussed in Brussels.

“Europe needs to take swift action to ensure our energy supply for next winter, and to alleviate the pressure of high energy bills on our citizens and businesses,” European energy commissioner Kadri Simson said Wednesday. “Today’s proposals are another step forward in our intensive work on this front.”