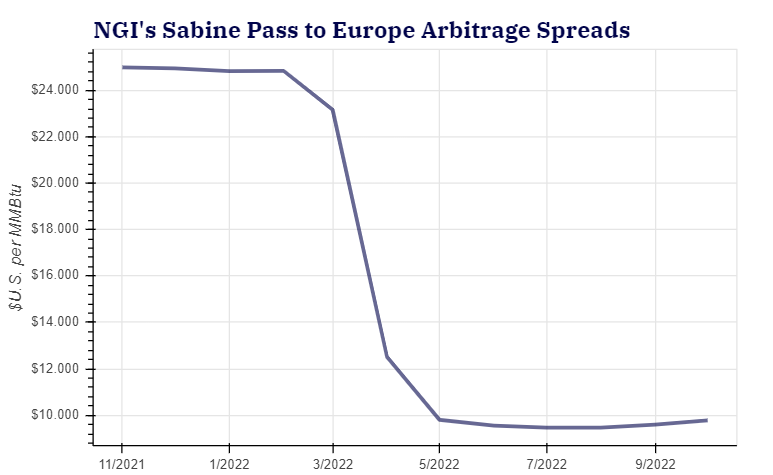 Gazprom PJSC booked no additional capacity for November through Ukraine during an auction Monday. The company took only about 35% of the available capacity via Belarus and Poland next month. The auction’s results came despite Russian President Vladimir Putin’s remarks last week that his country could help stabilize prices by sending more natural gas to Europe.

Additional Russian volumes could help ease a supply crunch on the continent, where storage inventories are at about 77% of capacity, their lowest for this time of year in over a decade.

Both Dutch and British futures inched up Monday once it became evident Russia would not move additional supplies during a volatile day of trading. European benchmarks gained from Friday’s finish, when they closed lower after another week of seesawing prices.

Tudor, Pickering, Holt & Co. said Russian flows have done little to change European storage balances so far. While LNG arrivals in Europe have crept up, they’ve also done little  to help the situation, the firm added. LNG imports are up just 400 MMcf/d month/month to 6.3 Bcf/d, below the three-year average of 7.8 Bcf/d.

A Gazprom affiliate said Monday that the Nord Stream 2 pipeline has been filled with 177 million cubic meters of natural gas, or enough to maintain pressure for future gas sales. The system, a crucial link for getting more natural gas from Russia to Europe, was completed last month. It is currently being commissioned, but commercial start-up remains in the offing as the controversial pipeline faces regulatory hurdles.

In the crude market, Brent closed lower, but it remains near multi-year highs as a supply deficit has supported prices.

Despite the divergence in various markets, the world is still moving through an energy shortage that’s cut industrial output and threatens households heading into the colder months.

The European Union last week released a “toolbox” of measures aimed at battling the rise in prices that includes short-term tax breaks for some households and aid for industry. Over the last two months in the UK alone, 13 energy suppliers have gone out of business. Daligas Ltd. became the latest. The firm had 9,000 customers, but roughly 2 million people have been pushed onto the rolls of larger suppliers when combining all 13 suppliers.