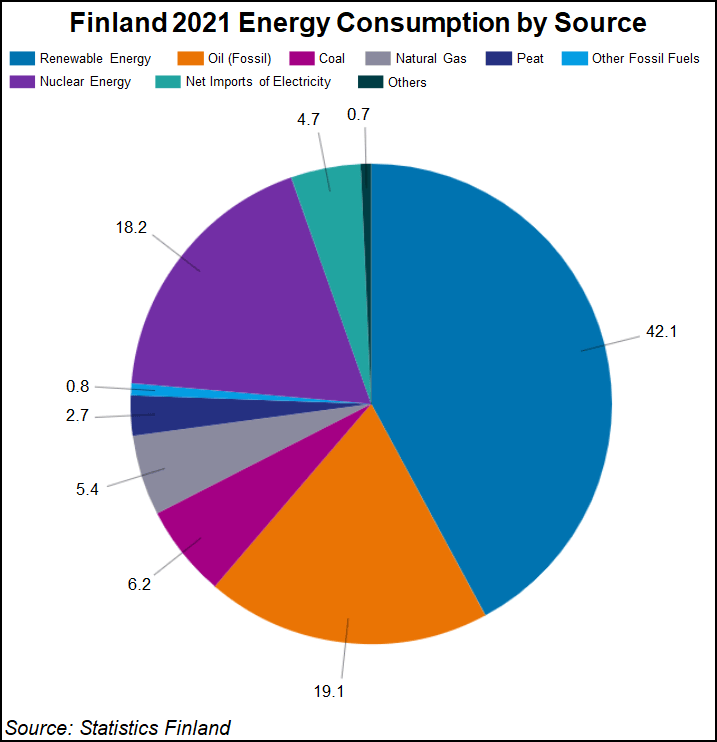 Russia’s Gazprom PJSC informed the company that it would stop delivering natural gas supplies to Finland beginning Saturday (May 21). Gazprom said it was halting exports to the country for its failure to comply with a process to pay for natural gas deliveries in rubles.

Gazprom said Friday that it had not received payment for April deliveries and would not export any gas to the country until it complies with the Kremlin’s decree for ruble payments. Gasum said it would not cooperate with the requirement because it violates its long-term supply contract with Russia and announced earlier in the week it was taking Gazprom to arbitration over the matter.

Finland is also in talks to join the North Atlantic Treaty Organization, stirring the ire of Russia as it shares a border over 800 miles long.

“It is highly regrettable that natural gas supplies under our supply contract will now be halted,” said Gasum CEO Mika Wiljanen. “However, we have been carefully preparing for this situation and provided that there will be no disruptions in the gas transmission network, we will be able to supply all our customers with gas in the coming months.”

The company said it would supply customers with alternate supply from the Balticonnector pipeline, which links the country with Estonia. Woodlands, TX-based Excelerate Energy Inc. also signed a 10-year contract on Friday to charter a floating storage and regasification vessel to provide LNG to Finland, Estonia and the Baltic Sea region.

The vessel could provide roughly 176 Bcf of natural gas annually as soon as this winter. That would especially ease the immediate threat of supply security, said Tom Marzec-Manser, head of gas analytics at ICIS.

How Much Russian Natural Gas Does Finland Import?

Overall, natural gas accounted for just 5.4% of the country’s energy consumption as the residential sector does not rely on it heavily for heating needs.

Even so, “Finland will lose its main source of gas supply, and even when the total volumes are not too big, the country will need to adjust to its new reality,” said Rystad Energy’s Carlos Torres-Diaz, head of gas and power markets.

According to Rystad, Finland consumed 85 Bcf of natural gas last year, of which 67 Bcf came from Russia. More than 80% of the natural gas consumed in the country last year was burned by the power and industrial sectors.

Torres-Diaz told NGI that replacing gas in the country’s power sector would be easier given that a new nuclear facility is slated to come online later this year. The industrial sector, he added, would likely have to import spot volumes from Europe to make up for the shortfall.

“The market consensus ahead of today was that it would only be Gasum cut off at this point in time, which is why we did not see any strength in the TTF,” Marzec-Manser told NGI. “Had more companies declared they too were going to have Russian pipe deliveries halted it is likely there would have been gains in the gas price.”

Andrei Belyi, an energy consultant at Estonia-based Balesene OU, said supplies are not typically in jeopardy when parties go to arbitration. He told NGI that Gazprom’s decision to  halt exports during the process despite the “sanctity of contracts” demonstrates the company is taking a firm stance and delivering on its promise to shut off volumes for those that don’t comply with the country’s orders.

European buyers seem to be taking note and have largely complied with the Kremlin’s decree for a new payment process to receive natural gas. That has helped the ruble surge despite broader economic sanctions for Russia’s invasion of Ukraine.

Russia’s Deputy Prime Minister said Thursday about half of Gazprom’s clients have opened two bank accounts to facilitate ruble payments for deliveries. Europe relies on Russia for more than a third of its natural gas needs.

Russia cut off shipments to Poland and Bulgaria last month for refusing to comply with the new payment process. Torres-Diaz said other smaller consuming nations on the continent could eventually see similar supply disruptions, but he said major buyers such as Germany and Italy are unlikely to be cut off given the sizable revenues they generate for Gazprom.

Top gas suppliers in those countries, such as Uniper SE and Eni SpA, recently indicated that they would comply with Russia’s payment demands.

Energy Aspects’ James Waddell, head of European gas, said his firm expects GasTerra BV in the Netherlands and Orsted AS in Denmark to soon lose Russian supply. Both have publicly stated that they will not comply with the Kremlin’s payment mandate.