Ruby Pipeline LLC has cleared the final regulatory hurdle to begin construction of its 680-mile east-to-west natural gas project, announcing Monday that FERC has approved the company’s application for a Notice to Proceed and Construct.

The $3 billion project, which is being built by Ruby parent El Paso Corp. and private equity fund Global Infrastructure Partners, is to carry natural gas supplies from the Rockies to West Coast markets. The Federal Energy Regulatory Commission (FERC) issued a certificate for the 1.5 Bcf/d pipeline in April (see Daily GPI, April 6).

Ruby filed its application with FERC last Friday, seeking approval of an implementation plan and authorization to begin construction of a 42-inch diameter pipeline in 33 right-of-way areas that do not have cultural mitigation pending (see Daily GPI, Aug. 2). The company also requested approval to begin construction of compressor and meter stations and associated facilities, and asked for permission to implement its historic properties treatment plans for Wyoming and Utah.

“This approval is a milestone, successfully culminating more than two and one half years of outreach and comprehensive permitting at the federal, state, and local levels,” said Jim Cleary, president of El Paso’s Western Pipeline Group. “In addition to supplying significant supplies of clean-burning natural gas to the western states, we are also proud that Ruby will employ almost 5,000 people from Wyoming to Oregon during construction, and that the pipeline will provide significant economic benefits to the four states along our route for years to come.”

The pipeline was awarded a right-of-way grant by the Bureau of Land Management (BLM) July 13 (see Daily GPI, July 14). The grant is subject to final completion of cultural treatment plans and related agreements on federal lands along Ruby’s route from an existing supply hub at Opal, WY, to interconnections near Malin, OR.

But even as Ruby moves towards construction of the pipeline an environmental group, the Center for Biological Diversity, said it has filed a lawsuit to block the project, alleging that it would threaten endangered fish species.

“The pipeline will cross more than 1,000 rivers and streams, affecting crucial habitat for several endangered fish species, and will use more than 400 million gallons of water over the next several years from an increasingly arid area,” according to the Center. The lawsuit, which was filed in the Ninth Circuit Court of Appeals, challenges the BLM’s decision to issue rights-of-way on federal lands and the U.S. Fish and Wildlife Service’s (FWS) review of the project’s impacts on endangered species. A previous FWS review, which was not included in the agency’s final report, had indicated that Ruby’s proposal could impact fish along the pipeline’s route, according to the Center.

Instead of “creating an entirely new path of destruction,” an existing pipeline could have carried the natural gas that will flow through Ruby, according to Noah Greenwald, endangered species program director at the Center for Biological Diversity.

“The pipeline will have serious impacts on nine endangered fish species, including the Lahontan cutthroat trout and Warner Creek sucker, as well as a host of other imperiled fish,” Greenwald said. “The El Paso Corp. has not done enough to ensure the Ruby Pipeline won’t jeopardize endangered fish.”

In July El Paso agreed to donate more than $20 million over the next 10 years to set up two conservation funds to preserve lands and wildlife habitat near the pipeline’s route. The funds were established in cooperation with two environmental groups, the Western Watersheds Project and the Oregon Natural Desert Association, to address potential environmental impacts arising from construction of the Ruby pipeline.

The project would extend westward from Opal through Wyoming, Utah and Nevada and terminate at the Malin Hub in Klamath County, OR. Project backers plan for it to interconnect with the facilities of PG&E, Gas Transmission Northwest Corp. and Tuscarora Gas Transmission in the vicinity of Malin. The project also calls for the installation of four compressor stations along the Ruby mainline, four receipt meter stations and four bidirectional delivery points. Ruby anticipates placing the pipeline in service by March 2011, according to El Paso. 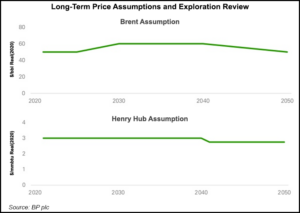 BP plc turned the investor world on its head Tuesday with a revamped strategy to slash oil and natural gas production while pouring billions into low-carbon investments. CEO Bernard Looney, during a lengthy conference call with top executives, further outlined the strategy that he had first unveiled in February, to put the company on a…