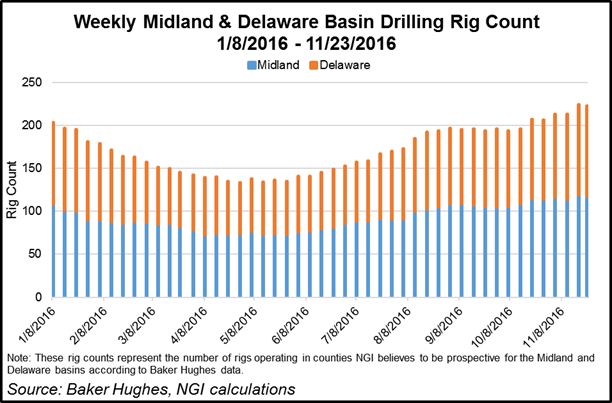 Prior to the deal, RSP Permian had been strictly a Permian Midland sub-basin player. The Silver Hill acquisitions add a significant Delaware Basin position. SHEP I and SHEP II collectively own approximately 68,000 gross, 41,000 net acres in northeast Loving and northwest Winkler Counties, TX, and at the time of the acquisition announcement had approximately 15 MBoe/d of net production (69% oil) from 58 wells (49 horizontals) producing from seven horizontal zones.

According to estimates by energy analysts, RSP paid around $46,000-47,000/acre for the leasehold.

Looking to bring the company’s operating experience in the Midland over to the new Delaware acreage, Gray envisions over the “next six months or so” focusing attention on building out infrastructure to accommodate a more full-scale development program of the acreage.

“As we begin constructing enhancements to our infrastructure, we anticipate accelerating the pace on our Midland Basin properties by adding an additional rig and keeping the existing two horizontal rigs in place in the Delaware,” Gray said during the earnings call. “We will then accelerate on the Delaware properties towards the second half of 2017. As we approach the end of 2017, we expect a balanced rig program between the Midland and Delaware basins.”