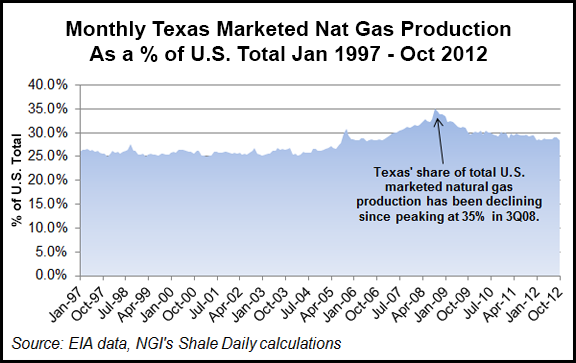 During November, Texas oil and gas wells produced 512.89 Bcf of gas based upon preliminary figures, which was down from 515.16 Bcf in November 2011. Texas preliminary November total gas production averaged 17.10 Bcf/d.

Last year, Texas producers boosted their crude oil production for the third year in a row as they followed the industry-wide migration from dry gas to oil and liquids-rich plays, which offer better returns in the low natural gas price environment (see Shale Daily, Jan. 29).

As of January, the average rig count in Texas was 812, which represents about 48% of all land rigs active in the United States, according to the RRC. Over the last 12 months, Texas production was 520 million bbl of oil and 7.2 Tcf of natural gas.

The RRC issued 1,457 original drilling permits in December compared to 1,630 in December 2011. The most recent total included 1,347 permits to drill new oil and gas wells, 23 to re-enter existing well bores, and 87 for re-completions. Permits issued in December included 460 oil, 115 gas, 838 oil and gas, 34 injection, zero service and 10 other permits.