Oilfield services (OFS) and equipment provider RPC Inc. said it might activate another hydraulic fracturing fleet but added that likely would not occur during the first six months of this year. 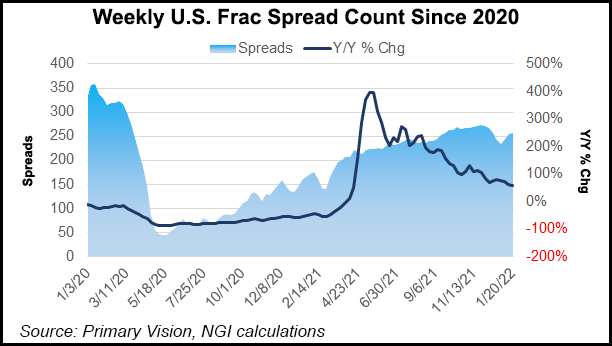 CEO Richard A. Hubbell said that he sees “many indications of continued growing activity levels and improved pricing” in the new year.

Last spring, Hubbell predicted a “continued modest recovery” as 2021 progressed. Previously, he said that he anticipated growth from private as well as public exploration and production (E&P) companies.

“RPC’s fourth quarter revenues increased as strong current and forecasted commodity prices encouraged our customers to continue their drilling and completion activities,” Hubbell said. “In addition, our revenues grew due to higher pricing and the new Tier IV dual-fuel pressure pumping fleet we placed into service late in the third quarter.”

Hubbell also acknowledged that “personnel shortages exacerbated by the current Covid surge” are affecting the operational environment for RPC.

“Our industry is also facing materials and parts shortages impacting many essential inputs, as well as price increases for raw materials and components,” he said. “While we have been able to stay ahead of these issues, they may impact our utilization and profitability in the near term.”

Cost inflation has presented challenges across the board for OFS companies.

During a call to discuss fourth quarter and full-year 2021 earnings, Vice President Corporate Services Jim Landers said that activating another horizontal pressure pumping fleet – bringing the total from the current eight to nine – is one action RPC is contemplating.

When asked about the company’s fleet count during the first half of the year, Landers said he “would think of it as being fairly constant to where…we’re starting the year. We’re assessing a number of things. One of them is activation of another fleet.”

Landers noted RPC has “some fairly new and good quality equipment that can be reactivated if demand wants it,” but he added the company has no new equipment on order.

If RPC had equipment on order, “we don’t know how long it would take for new equipment to be delivered, but we know it would be a little while. So even if you place an order today, you wouldn’t see a new additional fleet in the field from us during the first half of the year.”

CFO Ben Palmer said RPC “has really been trying to focus more on generating sufficient cash flow on fleets we do activate much more than trying to get as many fleets in the field as possible.”

To be sure, Palmer said the company is “very interested in activating another fleet” under continued favorable economic conditions.

“We will continue to evaluate economics to support upgrading our equipment fleet,” Hubbell said.

Landers described the “growth opportunities” capex as “probably a placeholder for a new fleet,” which he said would be Tier IV emissions standards-compliant.

RPC, whose operations comprise a Technical Services segment and a Support Services segment, reported $268.3 million in 4Q2021 revenues – an 80.5% quarter/quarter increase. It attributed the jump to “higher utilization of our existing equipment and pricing improvements.”

The management team explained that Technical Services include completion, production and maintenance services generally to improve oil and natural gas flow from a well or to address well control issues. Support Services include equipment and tool rentals, pipe inspection and storage, and oilfield training.