Energy Transfer subsidiary Rover Pipeline LLC has completed 100% of the tree felling for its 3.25 Bcf/d Appalachian takeaway mega project, but a construction update submitted to FERC this week suggests there’s plenty left to do as crews race toward a target July partial in-service date. 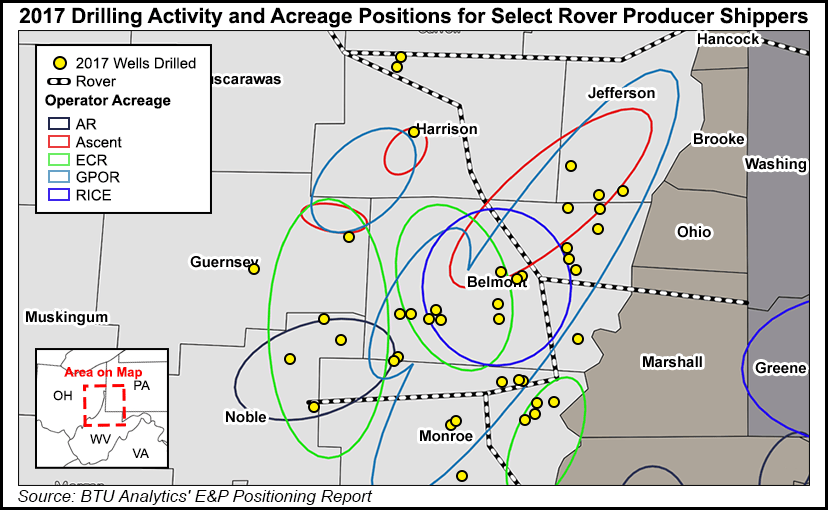 In an update filed in the project docket at the Federal Energy Regulatory Commission [CP15-93], Rover said it spent the week ending April 7 installing signage along the right-of-way and that it has begun full construction.

A progress table showed that crews also began trenching and laying and welding pipe during the week.

As for staffing, Rover said it is up to 7,570 trained personnel as of April 7.

“They continue to have scheduled trainings, which means they are continuing to hire,” natural gas analytics firm Genscape said in a note to clients this week. “Tree felling is (and has been) 100% complete, but we see clearing pass 50% on the mainline section — the supply section is lagging at only 29% complete, but we don’t expect for all the supply laterals to need to be complete for Rover Phase 1 (just Clarington).

“In new development is the progress on pipe laying and welding, which we think may be the crux of pipe construction. The progress here may be a significant factor in meeting/missing” the July target for commencing service to Defiance, OH. “However, it’s too soon to tell what kind of progress may be made in the current two week span.”

In addition to grading and clearing felled trees, Rover reported that it has started road bores and horizontal directional drilling (HDD) for the project.

“Rover has begun several HDDs along the route and is conducting noise surveys in accordance with” environmental conditions in its certificate, the operator told FERC.

Separately, Rover, which has previously drawn unfavorable attention from FERC over the destruction of a historic home near a proposed compressor station, filed two incident reports this week of drilling fluid spills in wetlands areas of Ohio.

Rover received notices of violation (NOV) from the Ohio Environmental Protection Agency for a spill of 50,000 gallons of drilling fluids from its HDD operation in a wetland area in Richland County, OH, and for a spill of 2 million gallons of drilling fluids in a wetland area adjacent to the Tuscarawas River in Stark County, OH.

In the latter incident, the NOV reports that “the drilling fluids accumulated within an estimated 500,000 square foot area of the wetland. The drilling fluids, which included bentonite and cuttings from the natural formation, coated the area with a layer of mud and impacted water quality.”

The $4.2 billion Rover, which is 95% with long-term commitments from producers — will run east-to-west, taking gas from Ohio, West Virginia and Pennsylvania to interconnections with the Midwest Hub in Defiance, OH, and the Dawn Hub in Ontario, Canada.

Once in service, the project is expected to have a significant impact on regional pricing dynamics, an impact perhaps foreshadowed by the shifts in basis differentials seen after the 800 MMcf/d Rockies Express Pipeline Zone 3 expansion came online at the start of the year.

Under Rover’s current timeline, which was strained by a prolonged review process at FERC — service to the Midwest Hub is scheduled to begin in July, with the rest of the pipeline coming online by November.

About 68% of the gas on the pipeline will be delivered at the Midwest Hub, with the remaining 32% going into Michigan and to Dawn via Vector.

Utica Shale producers appear to be ramping up in anticipation of the new takeaway Rover will bring to the Appalachian Basin.

“With the backlog of [drilled uncompleted wells] decreasing, producers will need to significantly increase drilling levels if they are to fill this new capacity,” BTU wrote. “…Drilling by these five producers has more than doubled since November, with Ascent and Gulfport accounting for the bulk of this activity, while Rice, Antero and Eclipse have had smaller increases.”