FERC on Friday cleared Rover Pipeline LLC to place three eastern Ohio supply laterals and associated compression into service, clearing the way for the 3.25 Bcf/d, 710-mile pipeline to offer up additional capacity to producers by the end of the year, as scheduled. 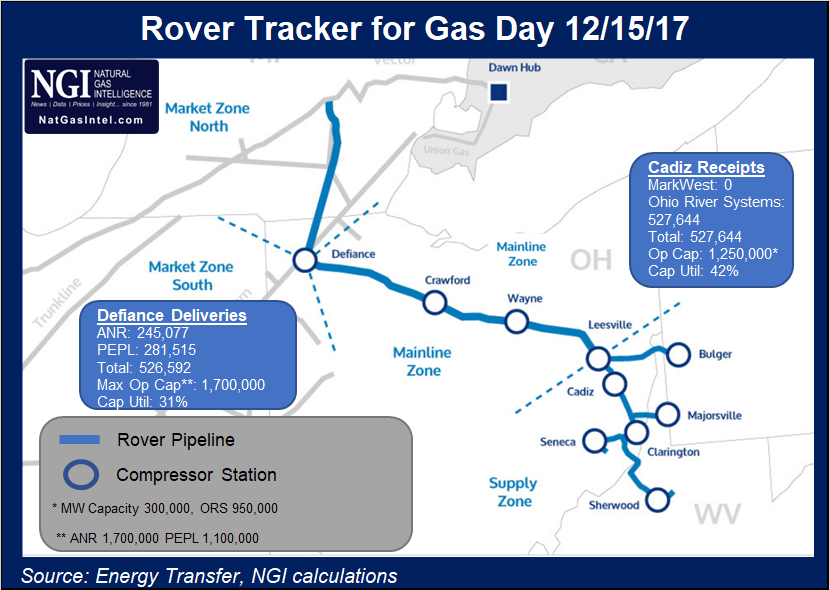 Federal Energy Regulatory Commission staff, in a letter to Rover, granted a request to start up the Berne, Seneca and Clarington laterals, along with the Clarington, Seneca and Cadiz compressor stations.

The supply laterals should allow Rover, designed to deliver Appalachia gas to markets in the Midwest, Gulf Coast and Canada, to connect additional receipt points to flow gas east-to-west on its Mainline A, which went into service in September.

Recently, Rover has been flowing around 500 MMcf/d from Cadiz, OH, to interconnects with ANR and Panhandle Eastern in Defiance, OH, according to NGI‘s daily Rover Tracker. In recent months, Rover has flowed as much as 1 Bcf/d or more. But with only two active receipt points, volumes have not approached the designed 1.7 Bcf/d operational capacity for Mainline A, according to information on Rover’s electronic bulletin board.

Rover spokeswoman Alexis Daniel said FERC’s approval would allow for Phase 1B to be completed. It runs near Summerfield, OH, to Cadiz. The new facilities are expected to increase available takeaway capacity from 1 Bcf/d to 1.7 Bcf/d, she said.

Also on Thursday, FERC lifted a hold on the remaining horizontal directional drilling (HDD) locations affected by a moratorium issued in May. Based on a review of site-specific plans and Rover’s implementation of requirements outlined in previous orders, the developer is cleared to resume activities at the last eight locations where work had been stopped, including these crossings:

In May, responding to an estimated 2 million gallon drilling fluids spill near the Tuscarawas River in Stark County, OH, FERC ordered a temporary halt to any new HDDs pending a third party review. FERC selected engineering firm J.D. Hair and Associates Inc. to conduct a review, and Rover has been working to implement the firm’s recommendations to address Commission concerns. In September, FERC began partially lifting the months-long HDD moratorium.

Thursday’s order frees Rover from a major regulatory snag that has held up completing some sections of the project since construction began earlier this year. After originally planning to bring the full project online by November, backer Energy Transfer Partners LP (ETP) has had to push back completion to sometime before the end of 1Q2018.

ETP spokeswoman Vicki Granado said late last month Rover had completed 25 of the 49 HDDs required for the takeaway project. Rover had 16 HDDs underway at the time.