Restoration work on the Rover Pipeline Project’s Burgettstown and Majorsville laterals could extend until mid-December, according to information submitted to FERC. 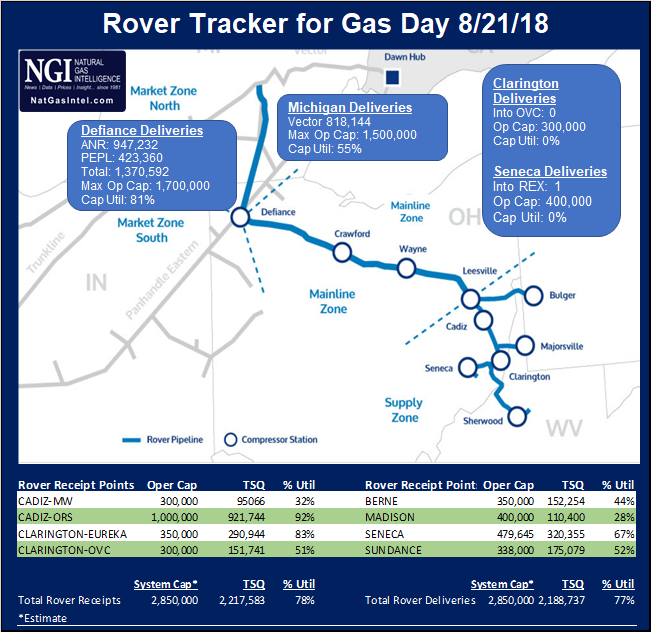 The schedule update, posted to the project docket Tuesday after submission Monday in response to a FERC information request, offers clues as to when Rover could secure in-service authorizations for the two lines and ramp up volumes on its designed 3.25 Bcf/d natural gas interstate pipeline [CP15-93].

Rover Pipeline LLC Senior Vice President Chris Sonneborn, head of engineering, said the developer’s latest forecast has restoration of “current known” slips or areas of ground movement along the Burgettstown Lateral wrapping up by Nov. 23 based on current crews and equipment available.

“Rover considered increasing the construction crews along the Burgettstown Lateral to facilitate a more timely completion of the slip restoration, but the locations of and access to the slips would make additional resources ineffectual,” Sonneborn said.

The Burgettstown line, which extends from southwestern Pennsylvania to connect with the Rover mainline in eastern Ohio, has been complete and ready for start-up since February.

Meanwhile, restoration work on the Majorsville Lateral, which would gather supplies from an origin point in Marshall County in West Virginia’s northern panhandle, could extend until Dec. 13, according to Sonneborn.

“Rover performed the same review of crews and resources on the Majorsville Lateral and concluded that the addition of two crews and associated equipment would be beneficial to the restoration effort,” Sonneborn said. “The original schedule forecast the necessary repairs along the Majorsville Lateral may be complete by March 7, 2019. The addition of the two crews improves” the timeline to Dec. 13.

Rover had previously urged the Federal Energy Regulatory Commission to authorize service in May for the Majorsville Lateral. But in an apparent response to missed deadlines for restoration work for other Rover facilities approved for start-up, FERC has withheld the remaining in-service authorizations for the heavily scrutinized 713-mile Appalachian takeaway project.

For its part, Rover has criticized FERC’s response, with Sonneborn attributing the restoration delays to weather issues beyond the developer’s control.

In the more recent filing, Sonneborn attached a detailed table listing around a dozen locations for both the Majorsville and Burgettstown lines where slips or restoration failures have occurred and require repairs, along with dozens more locations where repairs have been completed.

Specifically discussing cleanup and revegetation for the Rover project, CFO Thomas Long said, “We expect to have all these restoration activities 100% complete” in August.

Rover has been flowing more than 2 Bcf/d east-to-west across Ohio on its mainline to interconnects with Panhandle Eastern and ANR, with volumes also flowing north to an interconnect with the Vector Pipeline, NGI’s daily Rover Tracker shows.