Rover Pipeline LLC has completed over half of the 49 horizontal directional drills (HDDs) needed for the 710-mile, 3.25 Bcf/d interstate natural gas pipeline, and soon expects FERC to reauthorize the remaining eight HDDs still held up by a moratorium issued in May, an Energy Transfer Partners LP (ETP) spokeswoman said this week. 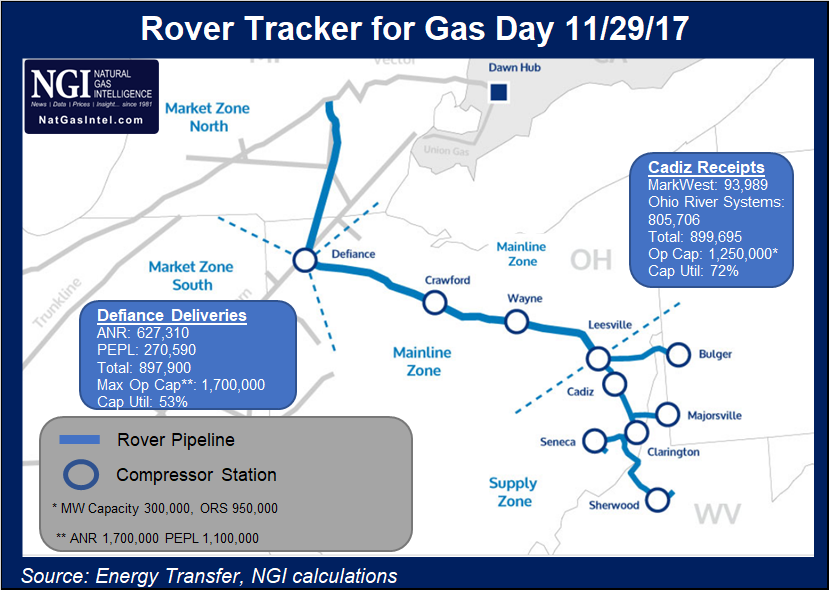 Meanwhile, the Ohio Environmental Protection Agency (Ohio EPA), which cited Rover for numerous alleged environmental violations this year — including a roughly 2 million gallon drilling fluids spill in April that led to the HDD moratorium — has publicly called out the company over five additional violations it says have occurred since HDD work resumed in September.

Ever since the Federal Energy Regulatory Commission called for an independent review in response to the scope of the April drilling fluids spill, which occurred near the Tuscarawas River in Stark County, OH, Rover has submitted numerous filings aimed at addressing the Commission’s concerns and preventing future inadvertent returns.

Rover has also asked FERC to authorize service for additional compression units at its Mainline Compressor Station 1, where partial service commenced in October.

ETP, developing Rover after agreeing in August to sell a $1.57 billion stake in the project to private equity, plans to bring the next phase of the pipeline — Phase 1B extending service to Seneca, OH — by the end of the year. The project, designed to deliver Appalachian shale gas to markets in the Midwest, Gulf Coast and Canada, is scheduled for full service by the end of the first quarter, ETP has said.

Meanwhile, on Friday an Ohio EPA spokesman distributed a copy of a letter agency Director Craig Butler penned to ETP accusing Rover of committing an “unacceptable number of new violations…in a matter of a few weeks.”

Ohio EPA has issued five notices of violation to Rover for inadvertent returns occurring between Sept. 26 and Nov. 16. The largest spill totaled 1,200 gallons and occurred Oct. 11 in Belmont County. The next largest totaled 200 gallons and occurred Nov. 16 near the Black Fork Mohican River in Ashland County, according to Butler.

The other three inadvertent returns cited in Butler’s letter were smaller and involved fewer than 60 gallons.

Butler said Ohio EPA planned to ask FERC to intervene and called for a “pause in HDD activities” pending review of these cited incidents.

Suggesting the inadvertent returns are a result of Rover working “to make up lost time” following FERC’s HDD moratorium, Butler said, “I cannot explain how disappointed I am with the continued trend of Rover causing environmental damage in Ohio by continuing operations causing unauthorized discharges to Ohio waterways…While thankfully having made some improvement from past noncompliance, Rover needs to improve operations in Ohio again significantly.”

ETP and Ohio EPA have been embroiled in a dispute over the scope of the agency’s enforcement authority over the Rover project. Ohio EPA has brought in the state’s attorney general to pursue legal action against the pipeline.

Ohio EPA has claimed Rover failed to obtain a stormwater permit required in a series of orders issued in July. Rover has said it submitted a stormwater protection plan that satisfies the requirements of that permit.

Meanwhile, Rover has accused Ohio EPA of pursuing an excessive amount in civil penalties over the alleged environmental violations.

ETP responded to Butler’s letter Monday, with Senior Vice President Chris Sonneborn, who’s in charge of engineering, accusing Butler of “egregious and serious misstatements and mischaracterizations” in an effort to advance a “litigation and political strategy.”

“…Rover takes these plans very seriously and is fully in compliance. Should Ohio EPA have reasonable and additional suggestions on how to reduce the risks of inadvertent returns, we are happy to listen. Your suggestion that there is somehow a ‘continued trend of Rover causing environmental damage in Ohio’ is simply false.”

Sonneborn disputed the notion that Rover is rushing the remaining HDDs and said Ohio EPA is overstating the severity of the inadvertent returns that have occurred since September.

“You document…only five inadvertent returns in that period that you claim are ‘violations.’ What you do not document is that those five inadvertent returns occurred at just two out of the dozen HDDs Rover is completing in Ohio, and when these few inadvertent returns have occurred, Rover has immediately identified them, ceased operations, and contained and removed the surfaced drilling fluids in full accordance with the FERC- and Ohio-approved HDD Contingency Plan.”

Sonneborn said ETP is “deeply concerned that there is a disconnect between our daily and regular communications with Ohio EPA and” Butler’s “public statements. Our interactions with your staff on the ground are friendly, highly productive and acknowledge” Rover’s compliance efforts, “but your public statements attempt to portray a different, and false, narrative.”