Now that Energy Transfer Partners LP’s (ETP) Rover Pipeline is officially up and running, offering more than 700 MMcf/d out of eastern Ohio, the market is getting its first taste of the project’s potential impact on Appalachian production and pricing. 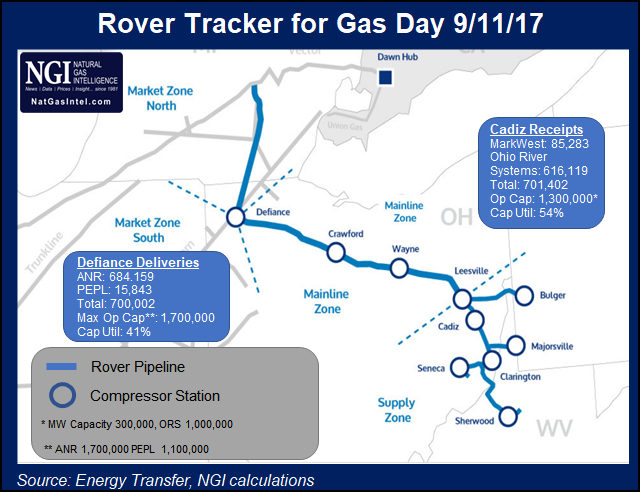 After receiving in-service authorization late last month and starting up its Phase 1A segment over Labor Day weekend, Rover was flowing just over 700 MMcf/d Monday from Cadiz, OH, to interconnects with Panhandle Eastern and ANR in Defiance, OH, according to NGI calculations using information from ETP.

To help keep tabs on the evolving Marcellus/Utica shale takeaway picture as Rover ramps up to its full 3.25 Bcf/d of designed capacity in the coming months, NGI is debuting its new daily Rover Tracker in Tuesday’s edition of Daily GPI. The Rover Tracker gives an up-to-date snapshot of receipts and deliveries on the project and will continue to expand as new segments enter service.

Scheduled for full service by fourth quarter, the producer-push Rover, a massive $4.2 billion, 710-mile greenfield project, would go a long way toward uncorking the Appalachian bottleneck. With Northeast production already ramping up in 2017, Rover — along with a number of other takeaway expansions set to hit the market soon — appears poised to unleash a new wave of Appalachian output.

Appalachian price hubs have seen widening negative basis differentials in recent months after pulling within 20 cents of Henry Hub in the spring, an analysis of Daily GPI prices shows.

It was around this time last year that key Appalachian points like Dominion South began to experience significant downward pressure from capacity constraints and plump storage. Last year, Dominion South reached a low of 29 cents/MMBtu during the last trading day of September, according to Daily GPI prices.

Fast forward to Friday’s trading, and the Appalachian price landscape was looking eerily similar. Amid bearish headwinds entering the weekend due to cooler forecasts and demand destruction from Hurricane Irma, Dominion South dropped 40 cents on the day to finish at 80 cents/MMBtu, with other points across the region also falling to sub-$1/MMBtu levels.

Besides Rover, the Northeast has grown its takeaway capacity over the past year, including the 800 MMcf/d — later increased by another 150 MMcf/d — capacity enhancement to Rockies Express Pipeline Zone 3.

Meanwhile Northeast production has increased by more than 3 Bcf/d since last October, according to PointLogic Energy. After averaging a little over 21 Bcf/d in October 2016, September 2017 month-to-date Northeast output has averaged 24.4 Bcf/d, PointLogic data show.

“Producers have been ramping their production in recent months anyway, and for the U.S. as a whole, production was up year/year in June for the first time in 18 months,” said Patrick Rau, NGI‘s director of strategy and research. “Several producers in the Appalachia will also likely increase their well counts, especially now that Rover has started partial service. That increase in production, combined with lower demand from cooler temperatures and outright demand destruction from Hurricanes Harvey and Irma, all point to higher gas in storage going into winter than the market was expecting just a few weeks ago.

“However, that is only part of the picture. Storage levels going into this winter are most likely going to have to be higher this year than in year’s past, because of higher expected demand, and I’m not sure exactly how much of that is getting priced into the winter strip at this time.”

Rau pointed to a presentation from NextEra Energy Resources’ Manager of Market Analytics Anupam Das, given Monday at the LDC Gas Forums in Chicago.

Das estimated that U.S. working gas in storage will be 3.8 Tcf heading into November but will exit March closer to 1.3 Tcf, versus 2.1 Tcf exiting winter 2016/2017. Das said he expects 2017/18 winter demand to be up 9.5 Bcf/d year/year, assuming a normal winter and given additional forthcoming liquefied natural gas export capacity.

With Rover kicking off a new round of pipeline expansions, Northeast producers have set their sights on growth through 2019, but there may not be enough demand to support these targets, according to a recent analysis from RBN Energy LLC.

Based on recent 2Q earnings calls, Marcellus and Utica producers “collectively say they anticipate a huge 14.5 Bcf/d of natural gas production growth by the end of 2019,” RBN said, noting that this generally assumes a $3/MMBtu forward curve.

After factoring in associated gas from the Permian Basin and the Midcontinent, and from the Eagle Ford Shale, along with renewed interest in the Haynesville Shale and other plays, incremental U.S. production growth from the start of 2017 through the end of 2019 “could theoretically achieve a jaw-dropping 24 Bcf/d if producers do what they say they can do,” according to RBN.

Even assuming these producer forecasts are overly optimistic, RBN said it projects demand to only grow by 13 Bcf/d over the same period.

“Building a Marcellus/Utica supply outlook from the producer level up reveals three key things,” RBN said. “First, producers continue to expect large supply growth. Many producers in the Northeast are pure-play or heavily focused in the Marcellus and Utica” and do not have significant positions in other plays to reallocate investment. “Second, producers have committed more than $2.5 billion to long-haul pipeline expansions, not including any take-or-pay commitments they may have made to gathering and processing systems.

“…Third, the growth expectations do not require a substantial uptick in drilling.” Between the region’s drilled but uncompleted wells and “the productivity of the acreage,” the Marcellus and Utica would only need to ramp up to a combined 79 rigs to produce an additional 14.5 Bcf/d, “assuming, of course, the incremental rigs are drilling in the right places.”

To bring the market into balance, RBN said natural gas would need to fall to around $2.50-$2.60/MMBtu, a scenario that assumes some of the currently planned pipeline expansions do not move forward.

“With the start-up of Rover and the other Northeast expansions set to come online this year, the misalignment could begin to take shape soon,” RBN said. “Thus, the expectation is that prices will begin to respond in the near future.”