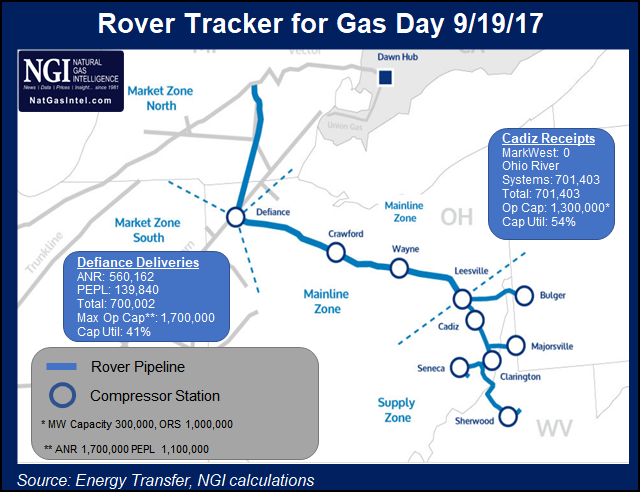 The Federal Energy Regulatory Commission on Monday authorized Rover to complete HDDs at nine sites where the agency had ordered a work-stoppage following an April drilling fluids spill near the pipeline’s crossing of the Tuscarawas River in Stark County, OH.

“Drilling operations” at the nine FERC-approved locations “are expected to begin within the week with an emphasis on the Captina Creek HDD in Belmont County, OH,” ETP said. “The completion of the Captina Creek HDD will allow the full Phase 1 portion of Rover from Seneca, OH, to Defiance, OH, to be placed in service by the end of the year.”

Rover’s Phase 1A began service at the start of the month. Phase 1A has since ramped up to around 700 MMcf/d flowing from Cadiz, OH, to interconnects with Panhandle Eastern and ANR, according to NGI‘s daily Rover Tracker.

“The Rover Pipeline Project will continue to work with the FERC to adhere to the requirements outlined in its approval and look forward to successfully placing the full project into service in the end of the first quarter of 2018,” ETP said.

During a 2Q2017 conference call in August, ETP management had said Phase 2 was on track for service by early December “with full commercial service in January.”

Genscape Inc. analyst Colette Breshears told NGI that “our analysis agrees” with ETP’s schedule for a 4Q2017 start-up for Phase 1B, but she said there’s still risk that Phase 2 could slip beyond the first quarter depending on what happens with FERC.

“We are generally on board with a 1Q2018 date for Phase 2 but note that there is a high risk for slippage past March if permission to drill the other two-thirds of the HDDs isn’t received in the next couple of weeks,” she said.

In the meantime, the Captina Creek HDD is a critical drill that should allow new receipt points south of Cadiz to connect to Rover, Breshears noted.

“Captina Creek is the only HDD preventing flow from the Berne, Seneca and Clarington receipt points,” Breshears said. “Volumes on the pipe will be determined primarily by whether compression becomes available. Without compression, we expect it will be extremely hard to raise volumes above 700 MMcf/d.”

The fully subscribed 713-mile, 3.25 Bcf/d Rover is designed to deliver Appalachian gas to markets in the Midwest, Gulf Coast and Canada. The roughly $4.2 billion project is one of the most highly anticipated greenfield pipelines under development because of its potential to uncork output from the constrained Marcellus and Utica shales.

With 700 MMcf/d already hitting the market, how much has Rover impacted production so far?

“To date, we have seen about 150 MMcf/d of new production directly attributable to Rover,” with the rest “coming at the expense of other pipes,” mainly Texas Eastern Transmission, or Tetco, BTU Analytics LLC’s Matthew Hoza said in a note Tuesday.

The new volumes flowing on Rover have had other ripple effects, Hoza said.

Winter heating demand could “mask some of the changes taking place. However, assuming a normal winter this year, by spring 2018, when Rover’s full volume is online and seasonal demand ebbs, we will most likely see two things occur: more Appalachian gas displacing Rockies volumes out of the Midwest and weak supply basin basis as prices come down to force producers to curb volumes.”