Rover Pipeline LLC and FERC remain at odds over pending in-service requests for the final portions of the 713-mile, 3.25 Bcf/d project, with the operator this week defending its actions after Commission staff scrutinized missed restoration deadlines. 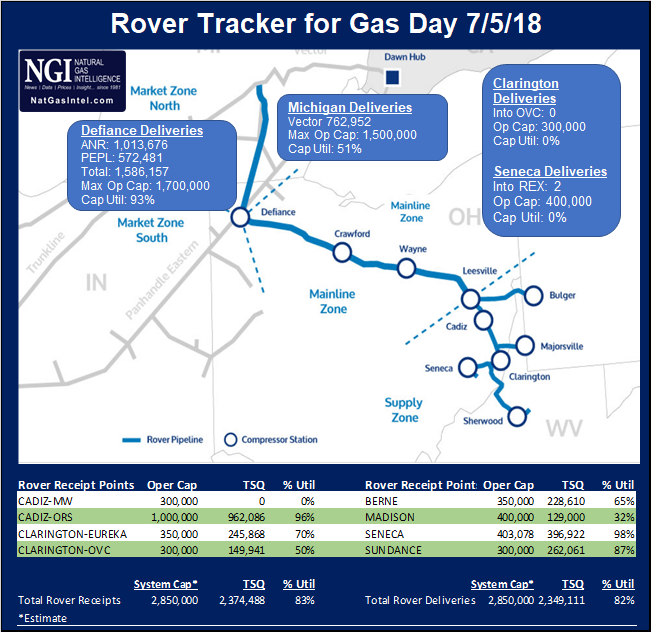 After the Federal Energy Regulatory Commission once again put the embattled pipeline in its regulatory crosshairs last week for missing restoration deadlines set out in a May 1 order, Rover fired back in a letter Monday. The operator attributed the delays to weather conditions beyond its control and said it has “acted in good faith” throughout the process to inform the Commission and landowners of the issues it’s encountered and to address them.

“Rover kept FERC informed of the progress of the restoration efforts on the Market Segment, and had informed FERC that it was preparing a letter for the docket to explain the brief, weather-driven delay in the completion schedule,” Rover Senior Vice President Chris Sonneborn, head of engineering, wrote to FERC.

“Although Rover was attempting to engage FERC staff in a discussion regarding the anticipated date of completion of restoration activities on the Market Segment, FERC staff, rather than relaying specific concerns, as a first step, chose instead to send a public letter implying otherwise. In fact, Rover has been communicating this information to FERC and landowners throughout the process, and staff knows that to be the case.”

Sonneborn said the operator was “concerned” by FERC’s implication “that, somehow, Rover will not meet all its restoration commitments. That is inaccurate and untrue. For the record, and as Rover has stated previously in this docket on numerous occasions, Rover will honor and meet all of its restoration commitments — whether those are schedule to occur before or after Rover is fully in service. Any implication to the contrary is simply untrue.”

The latest back-and-forth between FERC and Rover comes as the operator is seeking approval to place its Majorsville and Burgettstown supply laterals into service. Rover had sought approval last month to place the lines in-service by June 25, and the Burgettstown line has been ready for start-up since February.

In a June 21 letter to FERC, Sonneborn accused Commission staff of changing restoration requirements “at the eleventh hour” on in-service authorizations for the laterals.

“Indeed, staff indicated for the first time that these two in-service requests are also contingent upon a host of other evaluations, including how quickly Rover is addressing landowner issues, how Rover is progressing on restoration of other in-service segments and laterals, and if Rover is meeting its other committed dates on other efforts across the project,” Sonneborn wrote, calling the change “unwarranted and unreasonable” given that “the affected areas have been impacted by near unprecedented rainfall.”

Sonneborn this week accused FERC of failing to “respond to the substance” of the June 21 letter or respond to the Burgettstown and Majorsville in-service requests.

“It is bewildering that the staff would rely on information regarding the Market Segment restoration progress that was already known to staff as the reason for not granting in-service authorization on the laterals,” Sonneborn said.

“Overall restoration completion on the Majorsville and Burgettstown facilities is substantially complete. Rover has complied with the restoration requirements staff continually communicated to Rover over the past several months…we therefore renew our request that Rover be authorized immediately to place these facilities in-service to benefit the nation’s consumers.”

According to a letter to the pipeline signed last week by FERC’s John Wood, deputy director of the Office of Energy Projects, Rover was expected to miss the deadline for completing restoration work on several facilities approved to enter service in May. Wood suggested that the missed deadlines could influence FERC’s decisions on the project’s remaining in-service requests.

Most of the remaining portions of Rover’s final phase of construction entered service at the start of June, upping flows on the pipeline from around 1.6 Bcf/d to roughly 2.2 Bcf/d, according to NGI’s daily Rover Tracker. But FERC has yet to authorize service on four supply laterals, including the Burgettstown and Majorsville lines, potentially limiting supply into Rover, which is designed to deliver Marcellus and Utica shale gas to markets in the Midwest, Gulf Coast and Canada.

FERC has scrutinized Rover over a number of environmental mitigation issues during the review and construction process. Among the larger issues, FERC accused the operator of attempting to bypass national historic preservation regulations by acquiring and demolishing an old house near one of its proposed compressor stations without first notifying the Commission.

FERC also halted Rover horizontal directional drilling work for months last year after a drilling fluids spill near the Tuscarawas River in Ohio that it estimated at roughly 2 million gallons. The Commission subsequently launched an enforcement investigation over tests indicating the presence of diesel fuel in the drilling mud at the Tuscarawas site.