Rover Pipeline LLC is once again in regulators’ crosshairs as FERC staff on Thursday said the company is unlikely to meet the restoration deadlines set out in a May 1 order approving service on the Vector Delivery Meter Station, Defiance Compressor Station and the Market Segment. 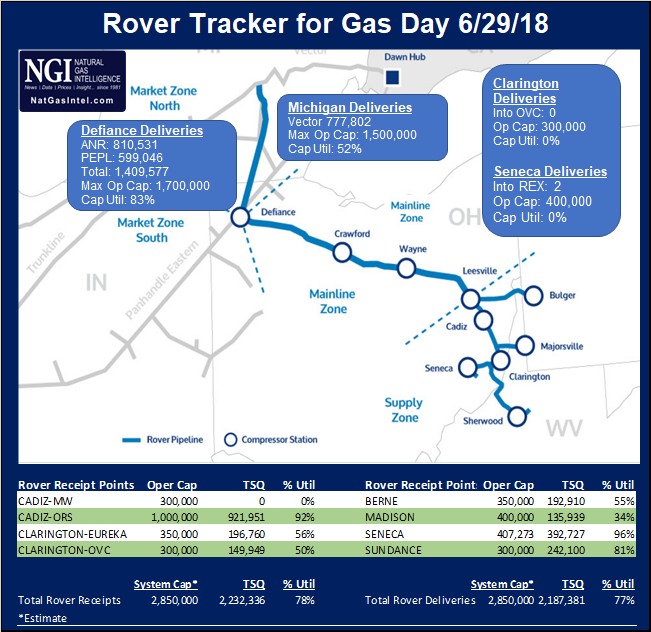 According to a letter to the pipeline signed by the Federal Energy Regulatory Commission’s John Wood, deputy director of the Office of Energy Projects, Rover was expected to miss the June 30 (Saturday) deadline for completing restoration work on those facilities, in violation of the terms of the May order. Rover told FERC staff via email that it expected restoration on the Market Segment to take until at least the end of July, according to Wood.

Thursday’s letter echoes an earlier missive from FERC that chided Rover for lagging behind schedule on restoration of Mainline Compressor Stations 1 and 2, and it raises the possibility of delays to pending in-service authorizations for four supply laterals.

“Because restoration of these facilities was not complete at the time of in-service authorization, Rover committed to completing the remaining restoration activities by specified dates,” Wood wrote, noting a checklist of items including grading, reseeding, restoration of stream banks, rill erosion and repair of erosion control devices, among other activities.

The West Virginia Department of Environmental Protection recently ordered Rover to pay a $430,030 fine related to sediment and erosion control violations that had led to earlier cease and desist orders from the state.

Rover must “take prompt and immediate action to address these outstanding restoration commitments” by filing a detailed explanation of when it expects to complete the restoration work and why it can’t meet its previous commitments, Wood wrote.

The “filing also must explain how Rover intends to communicate this delay to affected landowners and to inform landowners of when they can reasonably expect Rover to complete the outstanding restoration and resolve outstanding issues raised by landowner complaints.”

Most of the remaining portions of the 3.25 Bcf/d final phase of construction entered service at the start of June, upping flows on the pipeline from around 1.6 Bcf/d to roughly 2.2 Bcf/d, according to NGI’s daily Rover Tracker.

But FERC has yet to authorize service on four supply laterals, including the completed Burgettstown and Majorsville lines, potentially limiting supply into the now fully operational mainline.

Wood reiterated the Commission’s implied threat that decisions on future in-service requests “will depend, in part, on a demonstration of Rover’s commitment to satisfactory restoration of construction areas and workspaces, including our confidence that any locations where restoration is identified as a future action will receive the proper and agreed-upon attention.”

The 713-mile project, one of the highest-profile Appalachian pipeline expansions under development, is designed to deliver Marcellus and Utica shale gas to markets in the Midwest, Gulf Coast and Canada.