More than 85% of Houston-based Rosetta Resources Inc.’s 2013 capex budget of $700 million will be spent in the liquids-rich window of the Eagle Ford Shale. About 10% of spending will go to evaluation of new venture opportunities outside the Eagle Ford that the company recently began talking about. 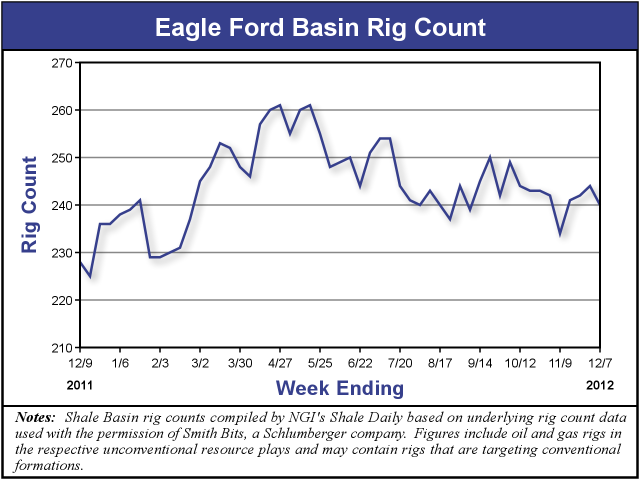 “The 2013 budget reflects our continued confidence in our Eagle Ford development program that has yielded significant growth in production and reserves at very favorable returns,” said CEO Randy Limbacher. “Liquids production now represents more than 60% of our current production, and we are maintaining a very competitive cost structure for our business.

“Going forward, we will continue to focus our efforts on expanding the development of our Eagle Ford assets and expect to deliver production growth of approximately 30% in 2013.”

Last month during a conference call with financial analysts, Rosetta management began talking up opportunities outside of the Eagle Ford, but executives were tight-lipped about exactly what is on the agenda (see Shale Daily, Nov. 12).

After peaking this spring, overall drilling activity in the Eagle Ford Shale came off a bit during the summer and has recently plateaued. After peaking at more than 260 active drilling rigs in April and May, there were 240 rigs in operation in the play for the week ending Dec. 7, which is down four rigs from the previous week, but up 12 rigs, or 5% from the 228 rigs in operation one year ago, according to NGI‘s Shale Daily Unconventional Rig Count.

“ROSE is a price-taker like everyone else, but we see the company better positioned than most to produce in what remains a pressured commodity price environment,” BMO analyst Dan McSpirit said, adding that natural gas liquids are the company’s “bread and butter.”

The commodity business favors producers with low costs, and McSpirit said this home truth will be repeated “with the turn of the calendar as many producers continue to struggle to drive margins and, especially, fund the gap. You know who you are,” he said in a note Tuesday.

Rosetta’s 2013 capital program is based on an average five-rig program and includes the drilling of 75 wells along with the completion of 62 Eagle Ford wells. About half of the completions will be in the Gates Ranch area, with the remainder in other areas in the liquids-rich window of the play, including the Karnes Trough area, Briscoe Ranch and Central Dimmit County.

Spending will be funded with cash flow and borrowings under a credit facility.

Guidance is in line with expectations, said Wells Fargo, and the company’s upside is currently incorporated in its share price.

“Eyes are on new ventures and whether the company can find and develop the same returns that operations at Gates Ranch produce,” said McSpirit.