The policy proposals and key government appointments made by President-elect Andres Manuel Lopez Obrador have provided a roller-coaster ride for Mexico’s energy industry and the analysts that follow it. 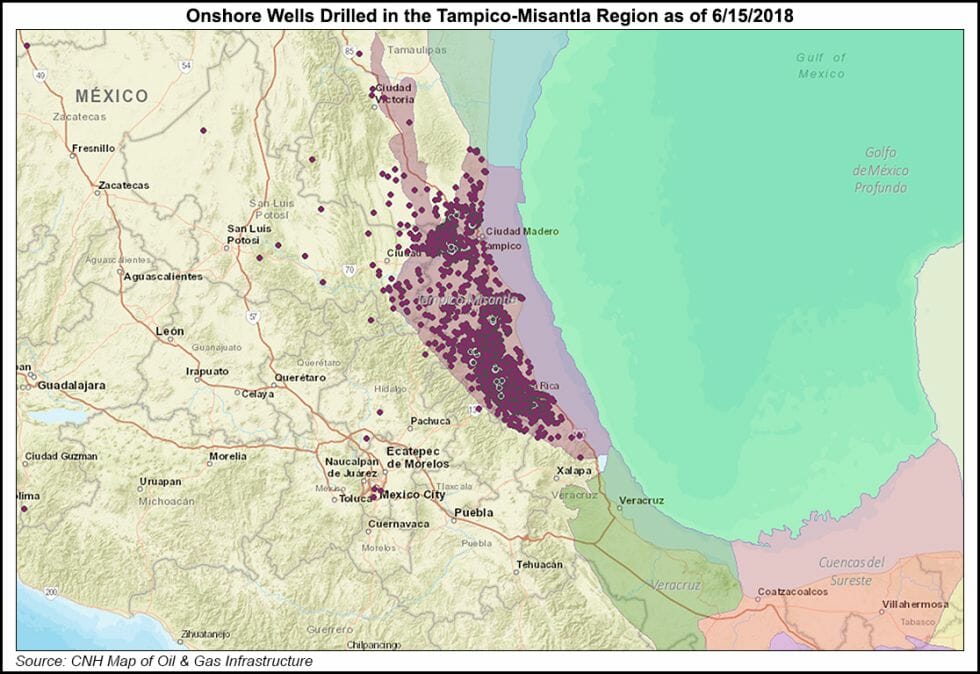 But so far, perhaps the biggest bump on the way has been Lopez Obrador’s recent remark that his government would ban high-volume hydraulic fracturing (fracking), the technique that revolutionized the oil and gas industry in the United States through the exploitation of unconventional resources that also abound in Mexico but have largely remained untouched there.

Some industry sources and analysts have taken with a pinch of salt Lopez Obrador’s warning of a fracking ban. What he said, they maintain, was an off-the-cuff remark at a press conference on public-health policy, not a formal statement of intent on energy issues.

However, Lopez Obrador is like no previous Mexican president-elect. Tradition usually demands that, on the evening after the Dec. 1 inauguration, the new president announces –after months of speculation– the names of the men and women who take the top posts in the new government.

The names of future Cabinet members were all published days and weeks ago, while Lopez Obrador has been expounding on all sorts of issues.

Meanwhile, the current president and initiator of the 2013-14 energy reform, Enrique Pena Nieto, appears almost to have gone underground.

But the incoming and outgoing leaders have appeared to be in a jovial mood over meetings in the National Palace that were meant to resolve the details of the transition.

However, many energy analysts were much less than jovial in their reaction to Lopez Obrador’s fracking remark. Some see it as a cruel act of sabotage not only for the future of the reform but also for the nation’s ambitions of prosperity.

“In just six years,” said David Shields, editor and publisher of the magazine Energia a Debate, “the U.S. doubled its oil output, ensured energy security, revolutionized its economy, created millions of well-paid jobs and slashed the power industry’s emissions. And all of that was due to fracking.”

Fracking has been satanized in Mexico, and Lopez Obrador aims to ban it, Shields said. “That way we’re going to be working on conventional deposits that are heading for exhaustion. It’s American pragmatism against Mexican nostalgia. Prosperity against poverty.”

But some in the industry regard the president-elect’s remark as a musing that is highly unlikely to see the hard light of day once he takes power.

“The remark was made in a press conference about health policy,” said a senior official of a prominent potential investor in the shale industry. “Politicians always play to their audience and that’s probably what Lopez Obrador was doing, though the remark certainly sent a shiver down the spine in some quarters of the industry.”

The industry source added that fracking is already being used by some companies, including state-owned Petroleos Mexicanos (Pemex). “In fact, Pemex has been using it for years,” he said.

So far, six companies, including Pemex, have been approved to pay the registration fee for the reform’s Round 3.3 auction that will be the first auction for unconventional resources.

Nine blocks are on offer, all in the northern Gulf state of Tamaulipas. “Though that is not where the best prospects for shale are in Mexico,” the industry source said. “The best are in the Tampico-Misantla basin farther south.”

But organized crime has a strong presence in both areas, said George Baker, head of the Houston-based consultancy, Mexico Energy Intelligence. The criminals are experts in extortion and in the marketing of fuel.

“The first step for the development of a shale industry has to be the creation of a secure working environment,” Baker said. “But there is much more to it than that.”

“Perhaps…the difference exists in the unique ecosystem” that the U.S. shale industry inhabits, Baker said. “Mexico, for example, lacks several elements of the ideal ecosystem, such as security, infrastructure and, perhaps above all, the ease of transfer of landholding and mineral rights. One possibility is to create a mini-ecosystem as an experiment, creating a mini-free zone in terms of safety from crime, and with good infrastructure and the establishment of laws that mirror those of the U.S.”

The potential in Mexico for the exploitation of unconventional resources in order to liberate growth is both very great and extremely urgent, according to Pulso Energetico, the independent think-tank that is supported by Amexhi, the Mexican Association of Hydrocarbon Companies.

“Mexico is one of the countries that have the largest amounts of recoverable unconventional resources,” Pulso Energetico says in its current newsletter, adding that the nation could harbor 545 Tcf of natural gas reserves.

Given the construction of adequate transportation and storage infrastructure, Pulso said, incentives could be given for unconventional blocks that contain higher-value liquids.

Meanwhile, demand for natural gas is growing rapidly worldwide. “But the trend in production has been heading in the opposite direction, with a 32% decline over the last four years,” Pulso said.