Early selling in natural gas futures failed to hold, with erratic, non-fundamentally driven price fluctuations continuing midweek. After sinking to a $1.774 intraday low, the May Nymex gas futures contract settled Wednesday at $1.939, up 11.8 cents on the day. Increases continued throughout the curve, with June picking up 6.9 cents to hit $2.053. 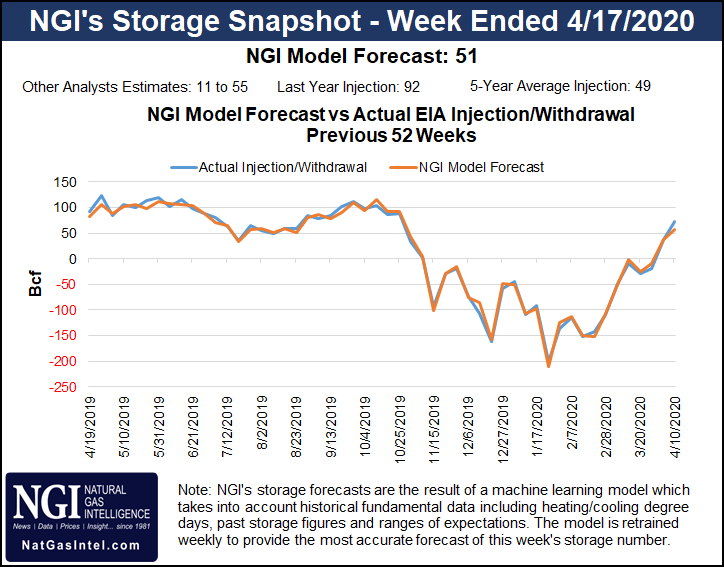 Spot gas prices were mostly higher, though gains were small and combined with softer prices on the East Coast despite lingering cold in the region. The NGI Spot Gas National Avg. climbed 5.5 cents to $1.710.

Weather models appear to have stabilized and continue to show cool-than-normal weather through early May from the Midwest to the Northeast. Some hotter weather in Texas and over to the Southwest also is boosting the overall demand picture, though none of it is particularly bullish, according to NatGasWeather.

Instead, the sharp swings in the natural gas futures market this week are being driven largely by historical shifts in oil. While the negative pricing in the oil complex aided Monday’s rally as gas production was seen taking a hit amid an-all-but certain ongoing pullback in drilling activity, “continued selling in oil along the forward curve appeared to carry over to natural gas Tuesday,” with May gas futures ending the session some 10 cents lower day/day, NatGasWeather said.

Monday’s oil market price action could serve as a “sharp” wake-up call for natural gas, according to EBW Analytics Group. “Watching the Nymex May WTI contract close at a negative $37.63/bbl is likely to send shock waves through natural gas.”

Indeed, continued volatility in crude once again spilled over into gas trading on Wednesday, with the prompt-month Nymex contract seesawing throughout the day in sympathy with the WTI June contract. The May Nymex gas contract hit its low early in the session, breached $1.95, fell to within a nickel of Tuesday’s settlement and then bounced again to close Wednesday near the high end of its nearly 20-cent trading range.

While the curve structure is “not as unreasonable” as a couple of days ago, the firm still questions the logic of a front-led rally of this magnitude, “and while we cannot rule out a push a little higher, we feel that, once again, risk of a pullback is increasing.”

As far as what “fair value” for natural gas is, Bespoke said that what makes the most sense is likely a lower price level for May futures due to the current environment of “very low demand” and news of some U.S. liquefied natural gas (LNG) cargoes being cancelled for June.

However, with oil markets in turmoil for weeks, the Lower 48 gas supply picture has become increasingly bullish. Before revisions, Lower 48 production on Tuesday was seen at 91.0 Bcf/d, down 1.6 Bcf day/day from the 92.6 Bcf/d seen on Monday, Genscape Inc. data showed. However, production was revised higher later in the day by 0.9 Bcf/d to 91.9 Bcf/d, reflecting a true reduction of around 0.7 Bcf/d.

Wednesday’s top-day numbers showed another 0.9 Bcf/d day/day loss, with Lower 48 production at 90.9 Bcf/d, Genscape said. The most recent losses were concentrated in the East, which was down around 420 MMcf/d and “very likely to be revised” as revised daily regional production has held closely to the regional month-to-date (MTD) average of 32.7 Bcf/d, according to the firm.

The likelihood of further gas production declines bodes well for already plump storage inventories. An EBW analysis suggests that available gas storage capacity may face constraints by late in the 2020 injection season, a theory Bespoke also supports. Noting that the precipitous decline in oil prices occurred before all storage was physically full, EBW said that “there may be a reevaluation of contract price risks in the weeks or months ahead, with enormous downside price risks for early fall contracts potentially priced in.”

The Energy Information Administration (EIA) is scheduled to release its weekly storage inventory report at 10:30 a.m. ET on Thursday. After a string of bearish misses, the majority of analyst expectations have coalesced around a build in the high 30 Bcf to low 40 Bcf range.

This would compare with last year’s 92 Bcf injection and the five-year 49 Bcf build, according to EIA.

Regardless of the actual figure, balances are “wicked loose,” according to Bespoke, and until the firm sees clearer signs of material tightening soon, “it is hard to be bullish at the front of the curve.”

Weather, while expected to be bullish this summer, is not going to help much either, “as we are in a low demand time of year, even without factoring in Covid-19 issues, and we are not projecting a notable deviation from normal into the start of May.”

Unlike the whiplash-inducing swings in the futures market, cash markets on Wednesday were generally quiet as neither warm weather out West or chilly weather on the East Coast produced enough demand to significantly move the price needle.

NatGasWeather said that a series of weak cool shots was expected to sweep across the Great Lakes, Ohio Valley and Northeast into the start of May, with one currently tracking through and a second to follow this weekend.

“These systems are far from frigid but will still drop lows into the 20s to 40s for modest heating demand,” the forecaster said.

Despite the unseasonably cool weather, Northeast cash markets were lower on Wednesday. Tenn Zone 6 200L next-day gas fell 11.5 cents to $2.000, but much smaller losses were seen throughout Appalachia, where the biggest mover was down 4.0 cents day/day.

With temperatures in Texas and the South set to continue warming going forward with highs of 70s to lower 90s making for light early-season cooling demand, prices in those regions were mixed. Henry Hub spot gas was flat at $1.870, but Katy Hub climbed 3.5 cents to $1.890.

The higher Permian prices have occurred amid a shift back toward typical flows from interstate pipelines to Permian-area intrastate interconnects, with the most notable among them being El Paso Natural Gas’ (EPNG) transactions with Kinder Morgan Texas, according to Genscape.

“These had changed by about 200 MMcf/d day/day concurrent with the price drop, even flipping from net deliveries to net receipts from EPNG’s perspective,” Genscape natural gas analyst Joseph Bernardi said.

In early cycle data for Wednesday, EPNG was back to making net deliveries to Kinder Morgan Texas, at 130 MMcf/d, although not yet back in line with the prior April-to-date average of 173 MMcf/d, according to the analyst. More typical flow patterns also were starting to be seen among the Northern Natural Gas, Oasis and Gulf Coast Express pipelines, Bernardi said.

Meanwhile, Midship Pipeline has started service, with scheduling volumes for Tuesday’s gas day for all receipts and deliveries except for Iron Horse and Velma, which are expected on Friday next Tuesday (April 28), respectively, according to Genscape.

Until firm contracts take effect on May 1, Midship is scheduling interruptible service so the firm expects flows to remain relatively the same.