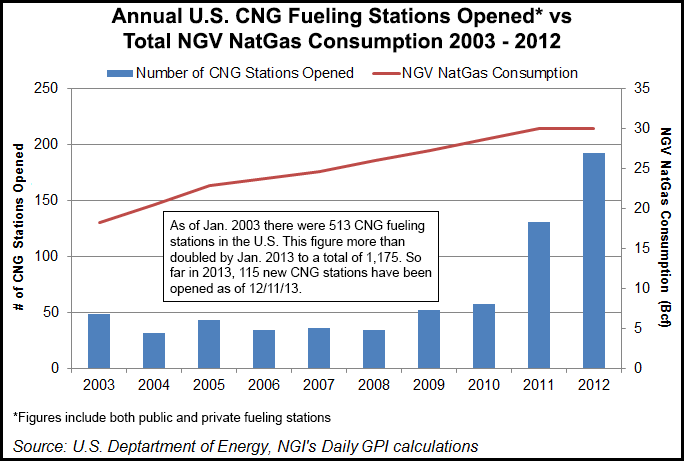 Noting that the federal grant money will he administered by the state Energy Office, Gov. John Hickenlooper said that 29 public and private fleet operators in the state, including some in the natural gas industry, have committed to help accelerate the deployment of NGVs and a broader fueling station network.

Earlier, the Colorado chief executive led a compact with 15 other states under a memorandum of understanding (MOU) committing each state to purchase more NGVs for their state fleets. Hickenlooper said the deployment of more NGVs and fueling stations is a top priority for his natural gas-rich state.

The goal in Colorado is for NGV owners to be able to drive nearly anywhere across the state fueled by Colorado-produced natural gas, the governor said.

In 2011, Hickenlooper joined Oklahoma Gov. Mary Fallin and 14 other states in signing the multi-state MOU on NGVs (see Daily GPI, Nov. 10, 2011). As a result, he claims vehicle manufacturers have begun offering states lower-cost NGVs and a wider variety of models.

Earlier in December, the Colorado Energy Office helped finalize an agreement among 29 fleet operators, including local governments, private-sector companies, other public entities and members of the natural gas industry. They will be the catalysts for getting more NGVs on the road and more fueling stations in Colorado.

Elsewhere, CNG expansion was given a boost in New York, Pennsylvania and California this month. Philadelphia Gas Works, the local gas distribution utility, said it is applying a $240,000 state grant for the purchase of 50 CNG vehicles, marking a return to use of NGV technology for what is the nation’s largest municipal gas utility.

Calling it an NGV rebirth, the Philadelphia utility is looking for 24 Honda Civic NGV sedans (2012 and 2013 models), along with 26 Ford E250 vans, with the up-fitter for the vehicles still to be named. In purchasing the Hondas, the gas utility is taking advantage of rebates and fuel purchase incentives from Honda Motor Co. of America and Clean Energy Fuels Corp., respectively.

Operating the new Kenworth T440 trucks, Try-It officials said they expect to save about 50% on fuel costs. ANG plans to price its CNG at $2.19/gasoline gallon equivalent.

SFO Director John Martin said that more than 600 buses, vans, taxis and autos currently operate on CNG at the airport. Trillium installed new dispensers, islands, canopies and signage at the SFO station, and plans to now have 81 CNG stations operating nationally by mid-2014 with 54 of the stations being public access.