What once was Rockies producers’ hotshot ride to higher netbacks is to be remade as the “expressway to the markets” from the Marcellus and Utica shales. The Rockies Express Pipeline LLC (REX) is embarking on a “great reversal” with the aim of sparing Appalachia producers the pricing pain felt so deeply out west half a decade ago. 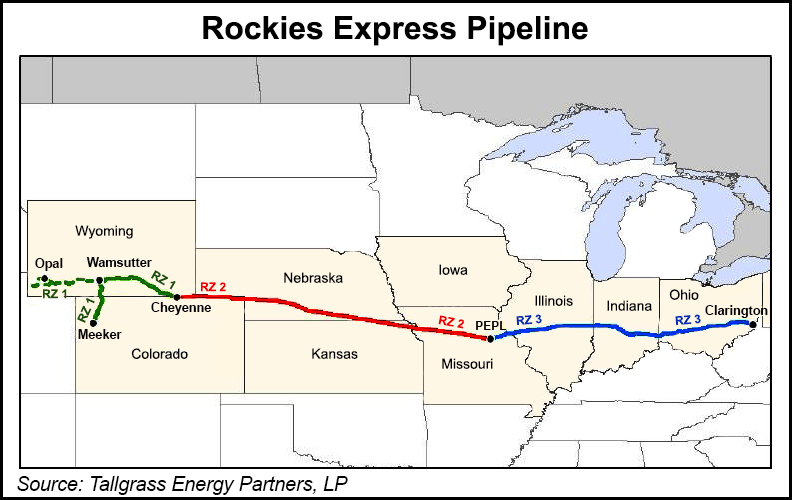 “…Utica gas needs to flow west,” REX Chairman Bill Moler said Wednesday at Bentek Energy LLC’s Benposium in Houston. “It can do 1.8 Bcf/d west to east; it’s a very minimal capital expenditure for us to turn that pipe around or make it truly bi-directional so it will be 1.8 Bcf/d east to west. We need to act now. The price downfall is coming.”

REX and the Ruby Pipeline, which carries gas west from the Rockies, both were built to bring price relief to Rockies producers, and they did what they were supposed to do. “Fast forward just three years and the landscape from 2009 has changed dramatically,” Moler said. Widespread expectations are that the Marcellus and Utica will be putting out 18 Bcf/d by 2018 and swamping the Northeast market in the summer and then potentially year-round, he said.

“Production in the Appalachia region has increased from 2.7 to nearly 8.2 Bcf/d in 2012…The Utica is on its way up,” he said. “While the Utica Shale well count is growing, production information remains obscure. We have seen first-hand that dry gas wells are coming on with significant IP [initial production] rates in the neighborhood of 30 MMcf/d. Rigs continue to drill wells. Despite the 332 total wells drilled, only 44 of them are shown as producing. That’s strictly infrastructure constraint at this point.”

Gas on Dominion has been trading at a discount to the New York Mercantile Exchange (Nymex), a warning signal to Appalachia, Moler said. “The question is how low can it go? If you just take the forward curve out, you get as low as 18-20 cents discount to Nymex in the out years, giving an indication that the same thing that happened in the Rockies is likely to happen in Appalachia if there’s not an infrastructure correction.”

Making REX bidirectional is not an option; it’s a necessity, Moler said. At Benposium he pitched a reconfigured REX as the “shale to shining shale” pipeline, the northernmost header system that touches shale and other plays across the country’s northern quartile. And of about 1.5 Bcf/d of current, planned or proposed processing capacity for the Appalachia region, approximately 1.2 Bcf/d is within 30 miles of REX, Moler said.

To make that case, Moler and REX management have to undo some of the marketing that was done for REX in its pre-shale iteration, when getting gas out of the Rockies was all the rage. Nobody knows what REX can do now, Moler said, citing the instance of a southeastern Ohio producer who had sunk a successful well (IP of 37 MMcf/d) 1,250 feet from the REX right-of-way. When the producer was told about REX, his response was, “‘well, that’s full. That’s full and there’s no space and it only goes to Clarington [OH]. I don’t want to go to Clarington.'”

Needless to say, the producer soon heard about REX’s 14 other pipeline interconnects and how it could get his gas to Chicago, Detroit, Indianapolis, St. Louis, Denver, etc. “The point is we can get your gas to markets other than the Northeast,” Moler said. “We can get Utica gas out of the area and competing in other parts of the country.”

There’s a bidirectional REX pitch for end-users, too, for instance, a power plant connected somewhere along REX’s midsection. With a good gas trader, such a plant’s operators could track weather patterns and source gas accordingly. Cold in Denver? Buy gas from the Marcellus. When the cold front moves to Chicago, get the gas from the Rockies or Marcellus, whichever is cheaper. And when the cold gets to Appalachia, fuel the plant with cheaper Rockies gas.

“As you’re watching that weather pattern move across the country, you actually have some unique arbitrage opportunities because we are the only west-to-east pipeline…” Moler said.

In talks with producers about switching flow, REX executives are hearing that they do not want to be dependent on gas moving from the west to east to offset volumes moving from the east to west. Currently REX is considering modifications to compressor stations, etc. to make flow bidirectional. East-to-west flow would be on a firm transportation basis and not necessarily accomplished through backhaul or displacement, Moler said.

As far as what rates on a bidirectional REX would be, Moler said, “we’re looking at everything.”

And for the record, REX management has read all the trade press stories about the less-than-full pipeline (“‘Oh my god, REX is not flowing east'”). But the fact is, nobody’s flowing east, Moler said, adding that legacy pipes from the Gulf Coast, Tennessee Gas Pipeline, Texas Eastern Transmission and Transco, are not flowing gas to the north anymore.

“It’s true that REX is not moving as much to the east,” he said, “but the point is that the Marcellus and Utica are so voluminous that the original transportation path is not necessary anymore.”