Rockcliff Energy LLC said Monday it has acquired approximately 60,000 net acres in East Texas prospective to the Haynesville Shale from an undisclosed seller. 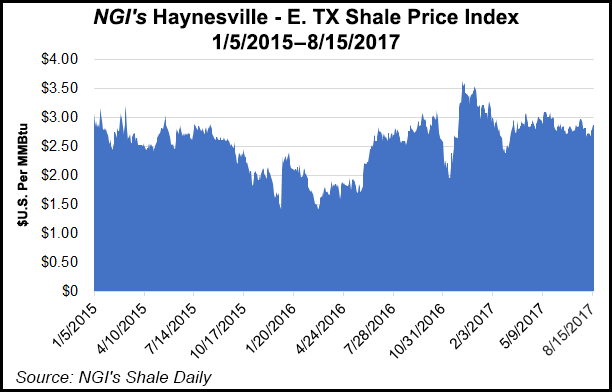 Houston-based Rockcliff said the properties, which are substantially held by production, are located in Texas’s Harrison and Panola counties. The company did not disclose terms of the transaction.

The acquisition follows news earlier this month that an affiliate of Rockcliff agreed to purchase about 210,000 net acres in East Texas and North Louisiana from Samson Resources II LLC for $525 million. The Samson deal, which is subject to closing conditions, is expected to close by Sept. 29 with an effective date of Aug. 1. Acreage in the Samson deal is prospective to the Cotton Valley and Travis Peak formations, the Haynesville Shale and Bossier sands, and holds 90 MMcfe/d net.

“Combined with our previously announced Samson acquisition, Rockcliff will have assembled a large, strategic position of approximately 180,000 net acres in the Haynesville Shale play,” said CEO Alan Smith. “We intend to apply the latest technology alongside our team’s deep Haynesville experience to successfully develop this premier acreage position. And in addition to the acreage’s favorable technical merits, we have the added commercial benefit of being located in close proximity to major natural gas markets.”

Chris Simon, Rockcliff’s vice president for business development, clarified for NGI’s Shale Daily on Monday that the Samson deal involved four separate acreage packages, of which only about 120,000 net acres in total were prospective to the Haynesville. Simon said the Samson deal is on track to close in late September.

Privately-held Rockcliff is focused on acquiring and developing unconventional and conventional assets in the Ark-La-Tex and Permian Basin regions. In addition to investment and ownership held by the Rockcliff management, the company’s outside investor group is led by the Houston-based private equity firm Quantum Energy Partners.

For more on the Haynesville Shale’s re-emergence, check out the NGI special report “Haynesville 2.0.”